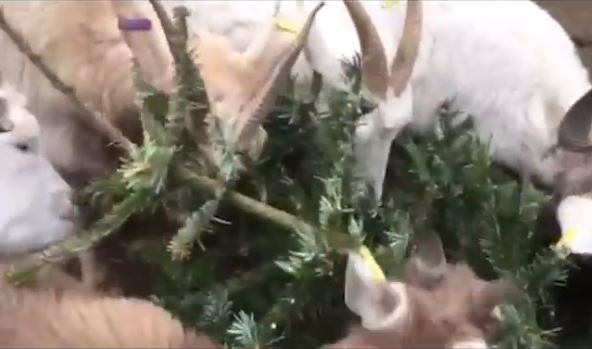 With the twelfth night looming, householders left wondering what to do with their Christmas trees can put them to good use – to feed pine-loving goats.

Not only do they make for great feed, the pines are a natural de-wormer while the trunks will be used to make a fence for the goats.

Now it wants unwanted Christmas trees to give its animals with a reputation that they will eat anything a treat.

Site maintenance manager and ‘goat whisperer’, Mel Chamberlain, who looks after the herd, said: “I had the idea last year when I was trying to find enrichment for our cow as she has to stay inside the barn for the winter.

“I found a video online where people had put Christmas trees in a barn and the cows seem to really enjoy playing with it.

“So we got some in to try to alleviate her boredom.

“Then I started to wonder if the goats might like to eat it so I did some research to make sure the trees weren’t poisonous or bad for them.

“It turns out goats love eating Christmas trees. I sent out a tweet last January 1 asking people to bring in any trees they wanted to get rid of.

“We received 60 trees and were able to feed the goats until April by keeping them watered.

“We also found out that Christmas trees are natural de-wormers for goats.

“It’s great because we’re a charity, the trees are free and people are able to get them off their hands.

“There’s no waste either, the goats strip the trees completely, even the bark.

“My goal this year is to make a fence for the goats out of the stumps, so it’s full recycling.”

There are seven goats living at the farm, all of whom loves munching on Christmas tress.

Goats eating Christmas trees is the best thing ever

Christmas just began for these goats at Kentish Town City Farm after this tree-rific video of them pine-dining on donated Xmas trees went viral. Well we can't think of anything more fun to do with your old trees, can you?

Posted by Lovethis.news on Friday, 4 January 2019

Mel said: “Rocky is a big cuddly boy, he thinks he’s a human and likes to sit on my lap – he weighs about 50kg.

“Ronnie particularly likes to launch himself into the middle of a tree and work his way out. He’s bonkers.

“Hope is usually a little fussy with new foods, but not with trees!

“Milly is a greedy guts and usually butts others out of the way, but they can all gather harmoniously around a Christmas tree

“Minnie is a real lady and very cuddly while Melody is the herd queen.

“Mimi is very shy but sticks with brother Rocky to get her fair share.”

The reaction has been very positive locally, with children getting in on the fun.

“I was up with the goats yesterday and Rocky – my favourite – spotted a little boy dragging a small Christmas tree up the path.

“He bleated in my ear and was clearly delighted.

“We’re on high alert for tomorrow as the trees come down on the twelfth night.”

The charity is accepting Christmas trees that are 100 per cent free from tinsel, baubles, fire retardant, snow or preservative spray.

Sharing a video of goats happily munching, which has been views nearly 30,000 times, they said: “So if yours fits the bill bring it over any day 9 to 5pm and give a goat a very happy new year.”