The man has relieved himself in the streets of Tolworth, south west London, at least three times, sparking an investigation into his toilet habits. 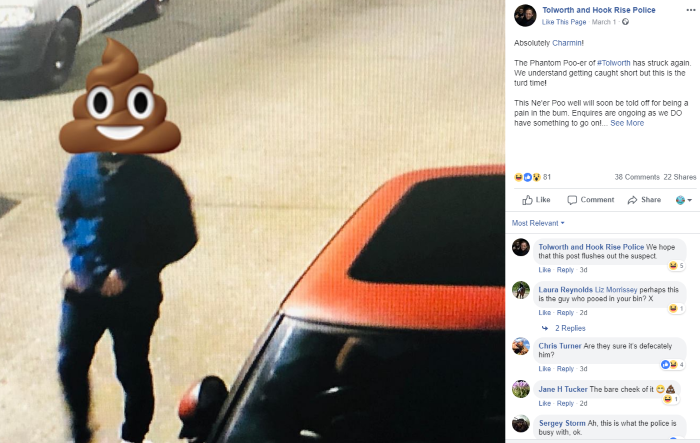 Police reckon they are closing in on the ‘Phantom Poo-er of Tolworth’ after releasing CCTV of the suspect – with a poo emoji covering his face for some reason.

The man has relieved himself in the streets of Tolworth, south west London, at least three times, sparking an investigation into his toilet habits.

Tolworth and Hook Rise Police posted the unusual photo with a warning that they would catch the fiend before he was caught short again.

“The Phantom Poo-er of #Tolworth has struck again. We understand getting caught short but this is the turd time!

“This Ne’er Poo well will soon be told off for being a pain in the bum. Enquires are ongoing as we DO have something to go on!

“We’ll s-pee-k to him soon as long as he doesn’t go on the runs as this post will surely flush him out.”

We aren’t sure whether the less than helpful image and toilet-related puns will elicit any new infoprmation, but their social media post has been flooded with poo-related puns.