An OAP was left with a two-inch gash on his face after being attacked by menacing seagulls in a seaside town – which stole his £1 STEAK PIE. Samuel Spencer, 81, was set upon by the vicious flock of at least three birds who left him ‘bleeding like a pig’ and missed his right eye […] 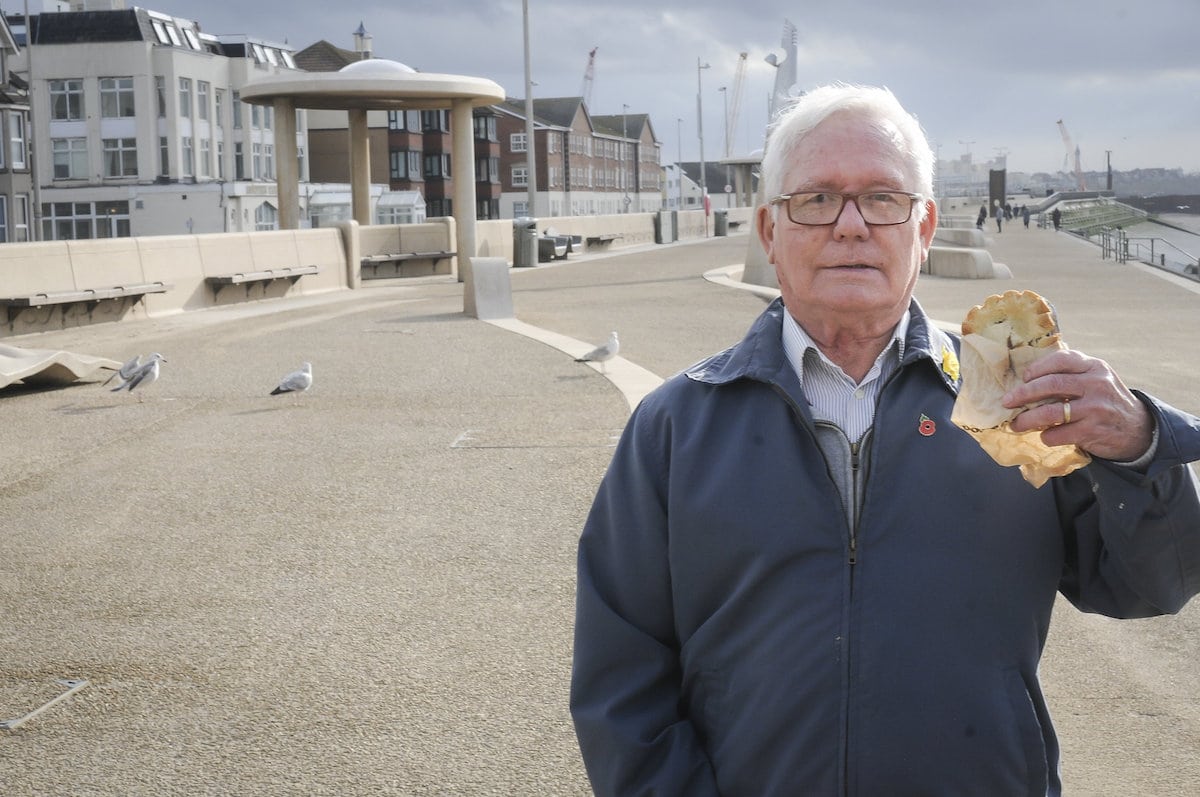 An OAP was left with a two-inch gash on his face after being attacked by menacing seagulls in a seaside town – which stole his £1 STEAK PIE.

Samuel Spencer, 81, was set upon by the vicious flock of at least three birds who left him ‘bleeding like a pig’ and missed his right eye by just inches.

Gull attacks have been increasing across Britain with the birds becoming ever more bold with stealing food.

Wyre Council in Poulton-le-Fylde, Lancs., recently revealed plans to make feeding seagulls an offence after a recent surge in attacks.

But locals in Thornton-Cleveleys, Lancs., are demanding more be done to tackle the ‘birdy blitzkrieg’ and even suggested employing a dedicated seagull patrol.

The latest aerial attack happened at 11.45am on Monday (Oct 30) moments after retired coal miner Samuel had nipped into a seaside bakery for his steak pie.

He said: “As soon as I got the pie out a seagull attacked me, grabbed the pie and cut my face, either with its beak or claws.

“There was more than one. They were all over me. It really shook me up.

“I managed to get to the bus stop and I was bleeding like a pig.

“You see kids eating hot rolls and ice creams. If they got attacked it could affect them for the rest of their life.”

Samuel was given a tissue by a woman and caught the bus home, where he was met by his bemused wife, Beryl, 79, who initially thought her husband of 60 years had suffered a fall.

She said: “He said he had been attacked.

“I said, ‘Attacked? How can you be attacked in Cleveleys?’ “And he said, ‘It was the seagulls’.

“A seagull tmade off with the pie, it was still in the wrapper, so he lost his dinner as well.”

Samuel said he called the council and asked for ‘signs put up warning people about eating on the main street’.

A spokesman for Wyre Council said: “We are conscious of the number of incidents in the borough and we record all accounts in order to provide evidence of the scale of the problem.

“As a result of similar incidents we have recently undertaken a consultation on whether to introduce a Public Space Protection Order preventing people from feeding seagulls.

“The results of that consultation are currently being analysed prior to a report being produced making recommendations on whether to implement or not.

“Where seagulls are in the vicinity we would advise all individuals to be vigilant when eating.”

More than 300 people had their say on proposals to ban the feeding of seagulls in Thornton, Cleveleys, Fleetwood, and Knott End.

The council wants to start handing out £100 fines to anyone caught leaving food for the gulls, after it emerged attacks on humans are being reported every three days.

Seagulls swooping to steal food from the clutches of hungry tourists isn’t a new phenomenon, though there has been a sharp rise in reported attacks in recent years.

In 2015, local councillors pleaded with people not to feed the birds on new beach signs after teacher Chantelle Bradshaw was left with a bloodied and bruised lip when a seagull tried to rip a sausage roll from her mouth.

She had been walked down Victoria Road West, the same street Mr Spencer was attacked on, with her partner Steve Connolly and their young son Max when the bird dive-bombed towards her.