Jemima Packington, 63, is the world's only Asparamancer and claims she can peer into the future by tossing the veg in the air and interpreting how the spears land 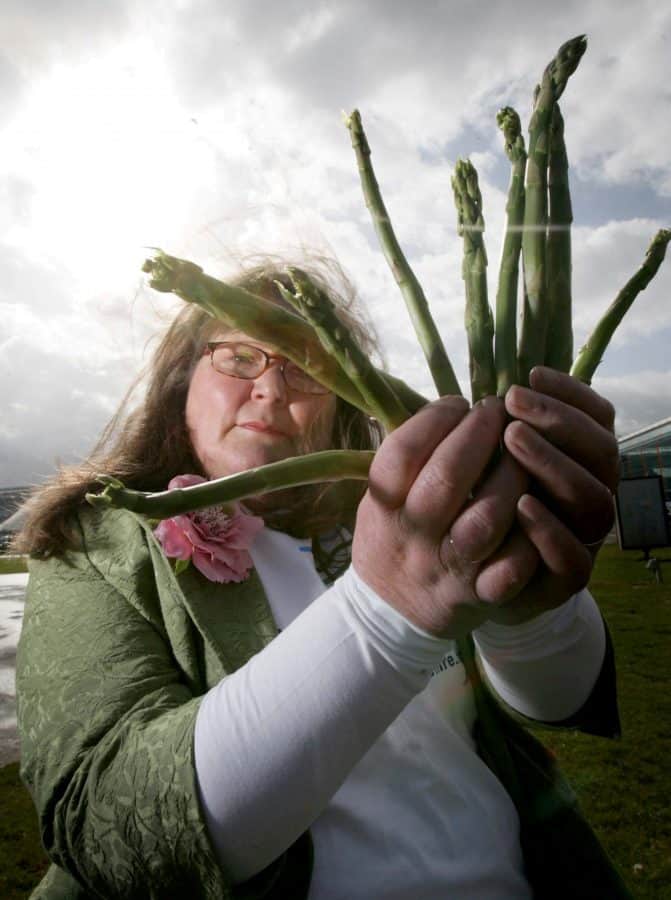 A fortune teller who predicted Brexit using ASPARAGUS has revealed her tips for 2019 – including a global recession, World Cup success and the return of TV’s Big Brother.

Jemima Packington, 63, is the world’s only Asparamancer and claims she can peer into the future by tossing the veg in the air and interpreting how the spears land.

She predicts that 2019 will see that extreme temperature will become a norm and well-known British businesses will fold.

She also says that despite a global recession, fears over the impact Brexit will have on the British economy will be largely unfounded.

Jemima believes the reality TV show Big Brother will also return to our screens after it
aired its final series in November.

She also says it will be a year of Oscar success for A Star Is Born and British actors.

Jemima also has good news for England’s rugby team as she predicts they will have success at the World Cup in Japan.

Meanwhile she says the women’s football team will win the World Cup at this year’s finals in France.

She also correctly predicted the price crash of cryptocurrency Bitcoin and the revival of books in the face of modern gadgets. 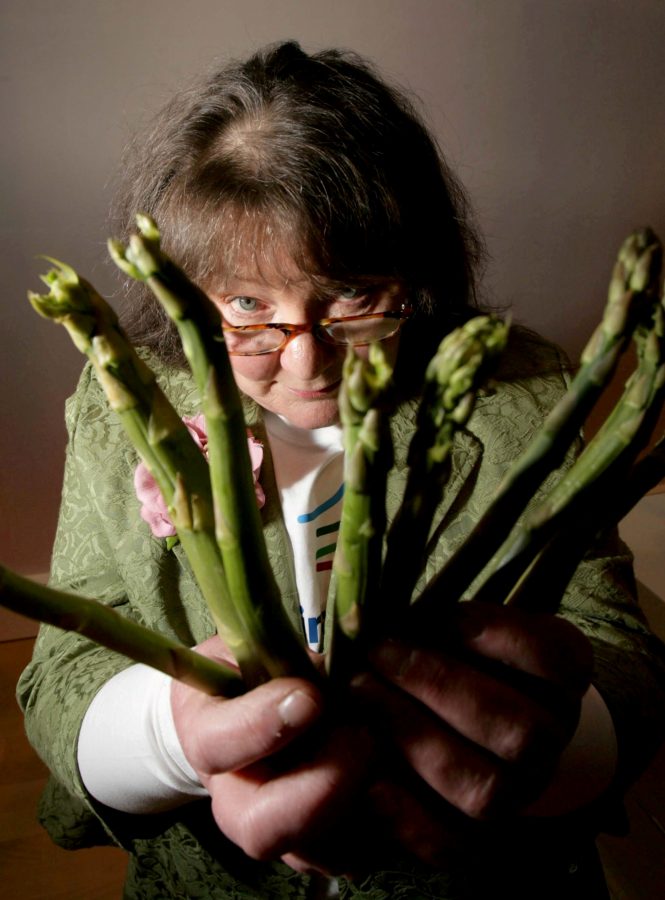 Jemima, from Bath, said: “I’m able to interpret the patterns left by the asparagus.

“When I cast the asparagus, it creates patterns and it is the patterns I interpret.

“Occasionally I get one slightly off, where I haven’t quite read it correctly, but I’m never far off.

“Regarding Brexit, the asparagus said it will not be as bad or as good as people are making out.

“It will just happen.

“We are going to get us to the hot summer and very cold winters.

“It will be equally as hot or hotter this summer.
“We are going to be surprised by the household name business that will fold this year.

“If you look at the trend over the past five years it is very damning.

“The internet will be in the reach of everyone across the world including poor countries.

“We are going to be astounded this year by the breakthrough of technology.

“I was correct with a lot of my predictions and close with others.

“I nearly predicted a new Prime Minster – she survived but she’s hanging on by a thread.

“In December, I like to take time on my own and get my predictions out – I take my time and write them down.

“I always look forward and never really look back.” 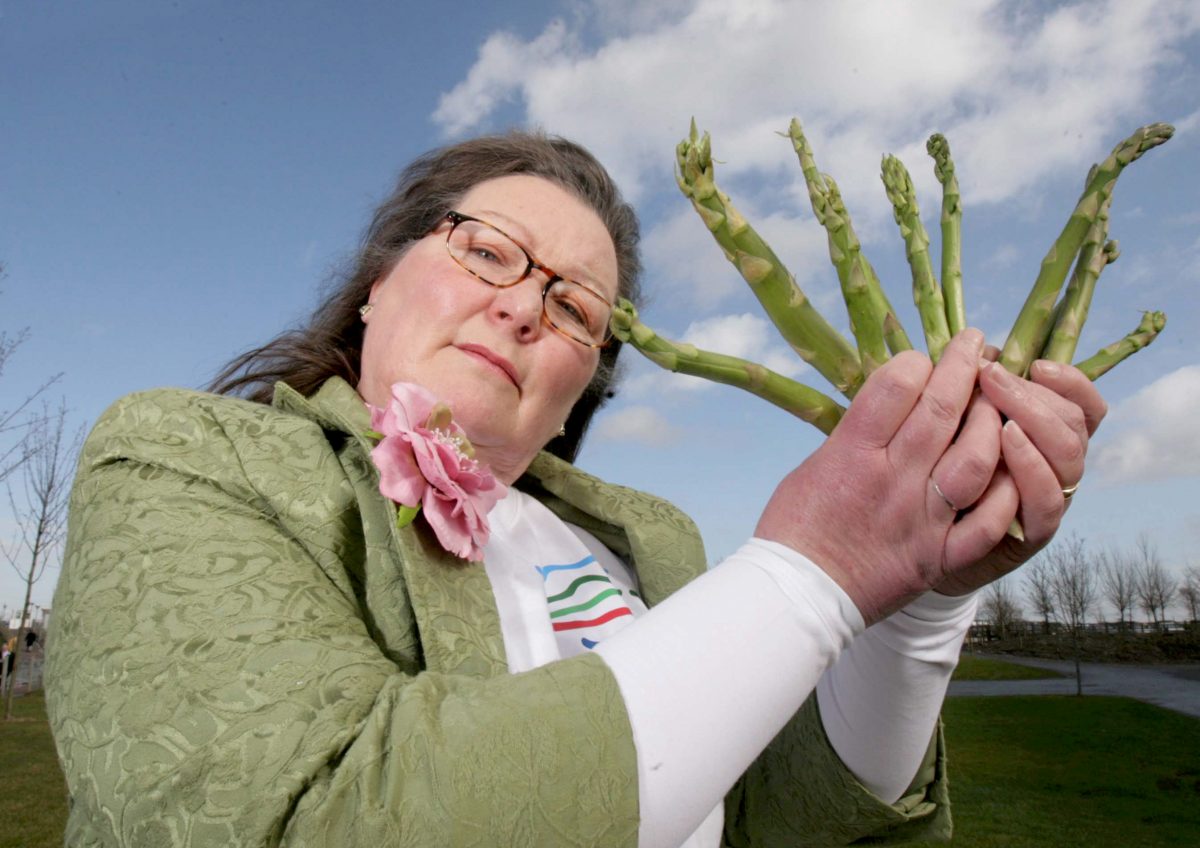 PREDICTION: Record number of Royal births.
RESULT: WRONG: Only one Royal baby was born this year – Louis Arthur Charles who was born on April 23 while Meghan Markle announced her pregnancy.

PREDICTION: UK will suffer flooding at the start of the year.
RESULT: WRONG: The UK was in the grips of the beast from the East – whilst flooding happened later on in the year.

PREDICTION: Earthquakes and volcanic eruptions will occur around the globe.
RESULT: CORRECT: Mount Soputan, in North Sulawesi province in Indonesia erupted in October – whilst an earthquake in the same country in August left over 2,200 dead.

PREDICTION: Theresa May will be ousted and Britain will get a new Prime Minister.
RESULT: WRONG: The PM narrowly avoided a coup by her own party who forced a no-confidence vote in December.

PREDICTION: Politics will be rocked by a string of scandals.
RESULT: CORRECT: The Windrush scandal and numerous accusations of sexual harassment and bullying by MPs have dogged Westminster.

PREDICTION: US will be an unlikely peacemaker as the world is on the brink of serious conflict.
RESULT: CORRECT: The US and North Korea were on the brink of nuclear war – but the situation was calmed down after intervention from China and South Korea.

PREDICTION: No major sporting achievements for our national teams.
RESULT: CORRECT: Andy Murray withdrew from Wimbledon through injury and England’s men football team were knocked out in World Cup semi-finals.

PREDICTION: Brexit will cause many countries outside the EU to review their border and immigration policies.
RESULT: CORRECT: Donald Trump is determined to crack down on migrants by building a border wall.

PREDICTION: The Bitcoin bubble will burst.
RESULT: CORRECT: Bitcoin suffered its worst year with a 77 per cent drop – taking its losses above $250 billion.

PREDICTION: Major world economies will suffer a downturn but will rally slightly.
RESULT: CORRECT: The economies of Germany and Japan shrank in the third quarter.

PREDICTION: Resurgence of the book as opposed to cyber libraries and video gaming.
RESULT: CORRECT: Book sales income rose by 5 per cent.

PREDICTION: More countries around the world will follow the Danish ethos of Hygge – or contentment and wellness of spirit and body. A significant return to family values will be seen.
RESULT: CORRECT: Hygge blogs and supporters have increased around the globe.

2019 PREDICTIONS:
1. Fears over Brexit will prove largely unfounded.
2. The Trade War between China and the US will end but there will be a recession in the US that will affect the world.
3. Exciting new technology will be launched.
4. England’s women’s football team will win the World Cup in France.
5. TV’s Big Brother will return to our screens.
6. Extremes of temperature become the norm.
7. US romantic musical ‘A Star is Born’ will win an Oscar.
8. Household British businesses will fold.
9. England’s cricketers and rugby team will enjoy success.
10. Asparagus will see an all-time high in sales

Watch: The hilarious moment a GB News presenter realises their own Brexit poll has gone against them