East West Spice took to Facebook to reveal its family crunchy box, which included a whopping amount of battered grub. 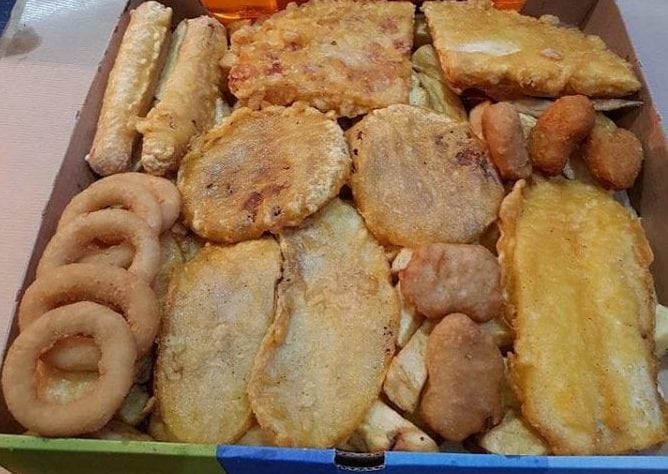 A Scottish chippy is selling Britain’s unhealthiest takeaway – one box containing a pile of fried foods and a gut-busting 7,000 calories.

The ‘Crunchy Box’ also comes with a two-litre bottle of Irn-Bru – taking the calorie count to a whopping 6,792.

In 2014 Pizza Hut was panned by health campaigners after unveiling a new “Cheeseburger Pizza” that contained 3,000 calories – half as much.

The shop ‘East West Spice’ is selling the Scots delicacies for £10 – and say people can’t get enough.

Bahadur Singh, manager of the shop in Greenock, says he has had a positive response about the high-calorie meal – which he says is designed for more than one person. It is known as the Family Crunchy Box.

He said: “I just thought it would be nice to combine the ideas and bring something which would appeal to everyone.

“We put the deal on and people seem to love it. Everything is cooked in fat but the dish is big enough for three or four people to share.

“It’s definitely for the family to eat. People think it’s a great deal.”

Another joked the box would be a “nice starter”.