Twisted David Gifford, 37, punched, kicked and choked Ashley Watkins, 29, who claims he whispered in her ear: "I’m going to make you watch your son kill you" 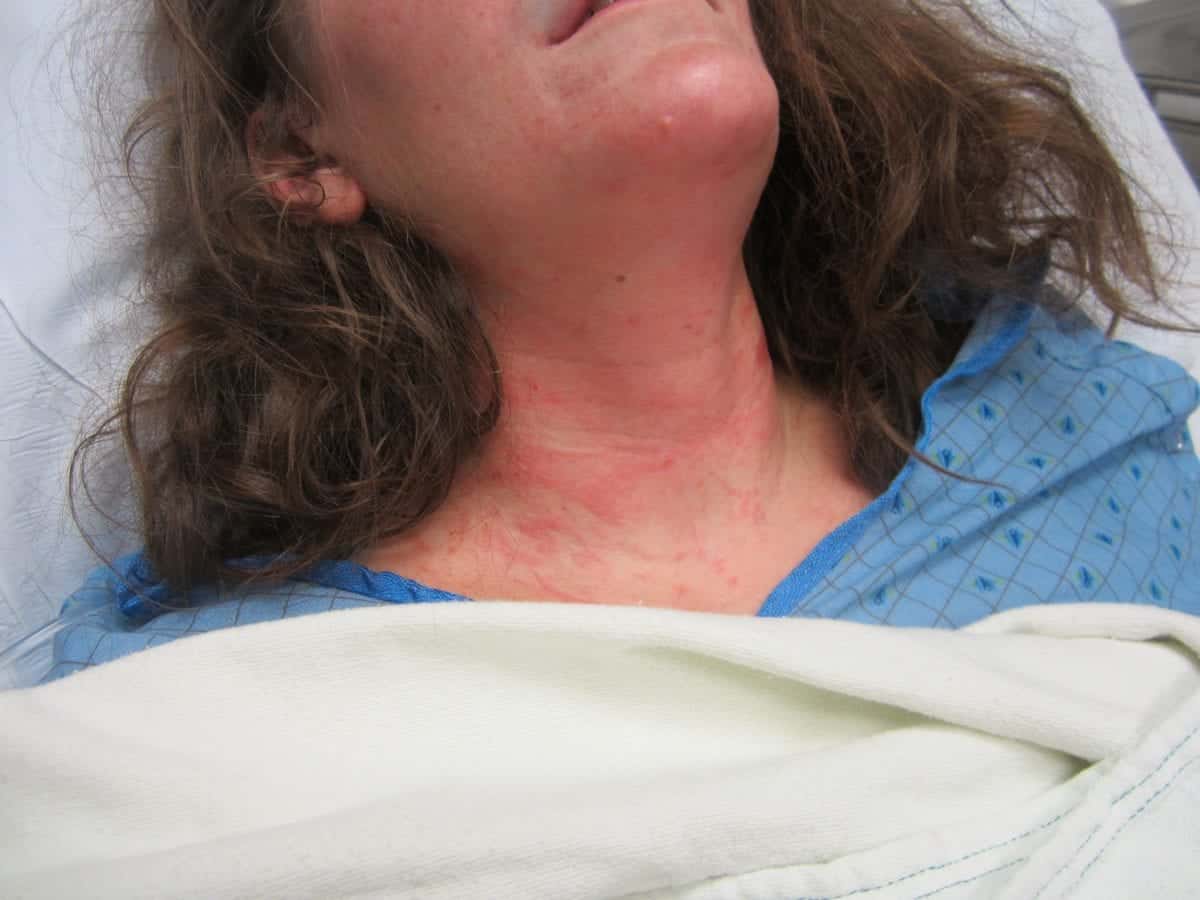 A mum whose boyfriend told her “I’m going to make you watch your son kill you” and forced her two-year-old to STAB her has bravely spoken out about the ordeal.

Twisted David Gifford, 37, was jailed for up to 10 years after the brutal attack on mum-of-three Ashley Watkins, 29.

The gas station attendant flipped out after a Thanksgiving Day row which Ashley says began when he put the festive turkey in the oven upside down.

Ashley told David to leave, but he returned to their home in Burley, Idaho, US, in a rage at around 6pm last November 23, a court heard.

The mum-of-three said: “We were just trying to have a nice family Thanksgiving, but then my mum noticed he put the turkey in upside down.

“She said he was ‘f*cking idiot’ and he picked up the turkey and got very upset.

“I decided it was best he left but later that night he came back with this mean, ugly look on his face.

“I said, ‘I’m very sorry for what happened,’ and I didn’t want to fight, but he started screaming.

“Then he goes into the kitchen and starts grabbing lots of cups and grabs the turkey and throws it up the walls.” 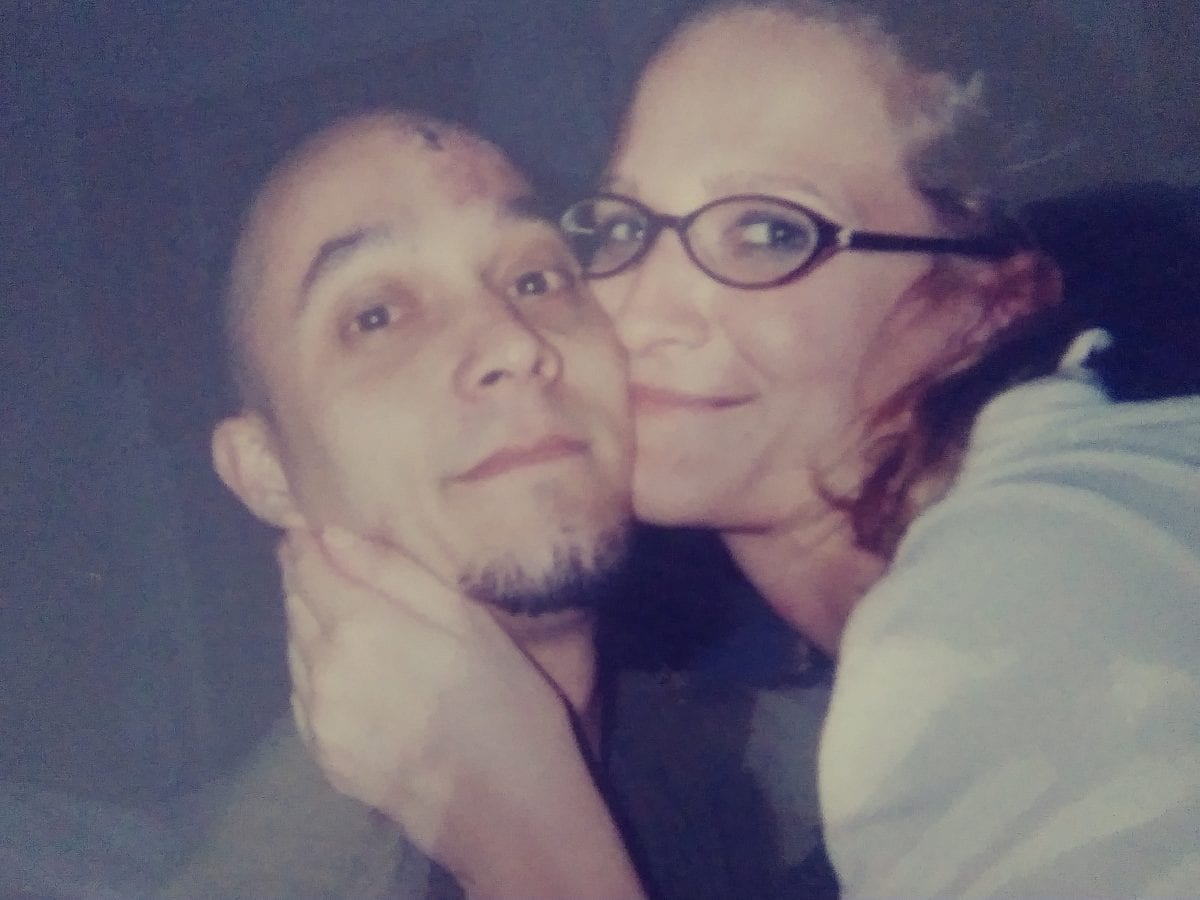 When Ashley fled to her bedroom to try and call the police, Gifford threw her onto the bed and beat her until she was covered in blood.

Ashley said the noise woke up her son Aason, who was tucked up in bed, and he wandered into his parents’ room.

“David said, ‘What else should we do to Mommy?’,” said Ashley, who says she tried to bolt down the hallway at one point but was thrown to the living room floor by her captor.

David then instructed little Aason, who was two at the time, to spit on his mum and hit her before instructing him to fetch a kitchen knife from the kitchen.

Aason, who has since been diagnosed with PTSD, was made to plunge the blade into his mum’s right shoulder.

Dad-of-four Gifford, a gas station attendant, was jailed for three to ten years in July after pleading guilty to felony domestic violence.

Ashley, a political science student, said: “He was beating me and pulling out chunks of my hair.

“The whole time he was screaming at me, ‘You stupid b*tch. I’m going to kill you.’

“This is the only dad he’s ever known and they had a close relationship. He trusted him.

“David had Aason spit on me and was making him kick me. David was saying, ‘Your son hates you. He’s not your son, he’s my son.’

“He was crazed and enjoying himself. He was happy, excited. You could tell he had no intention of stopping.

“I was face down on the floor and crying and Aason said, ‘Sorry Mommy.’ I said, ‘It’s OK baby.’ I just didn’t want him to say no and have David get mad at him.

“He ended up telling Aason to go grab a knife.

“He grabbed what I’m assuming was a butter knife, so David ended up going and he came back with a butcher knife and a steak knife.

“He flipped me over and told Aason, ‘Stab Mommy.’

“He whispered in my ear, ‘I’m going to make you watch your son kill you.’”

Because Aason’s blows didn’t have enough force, Gifford grabbed the little boy’s fist and helped him drive the blade into Ashley’s shoulder, she said. 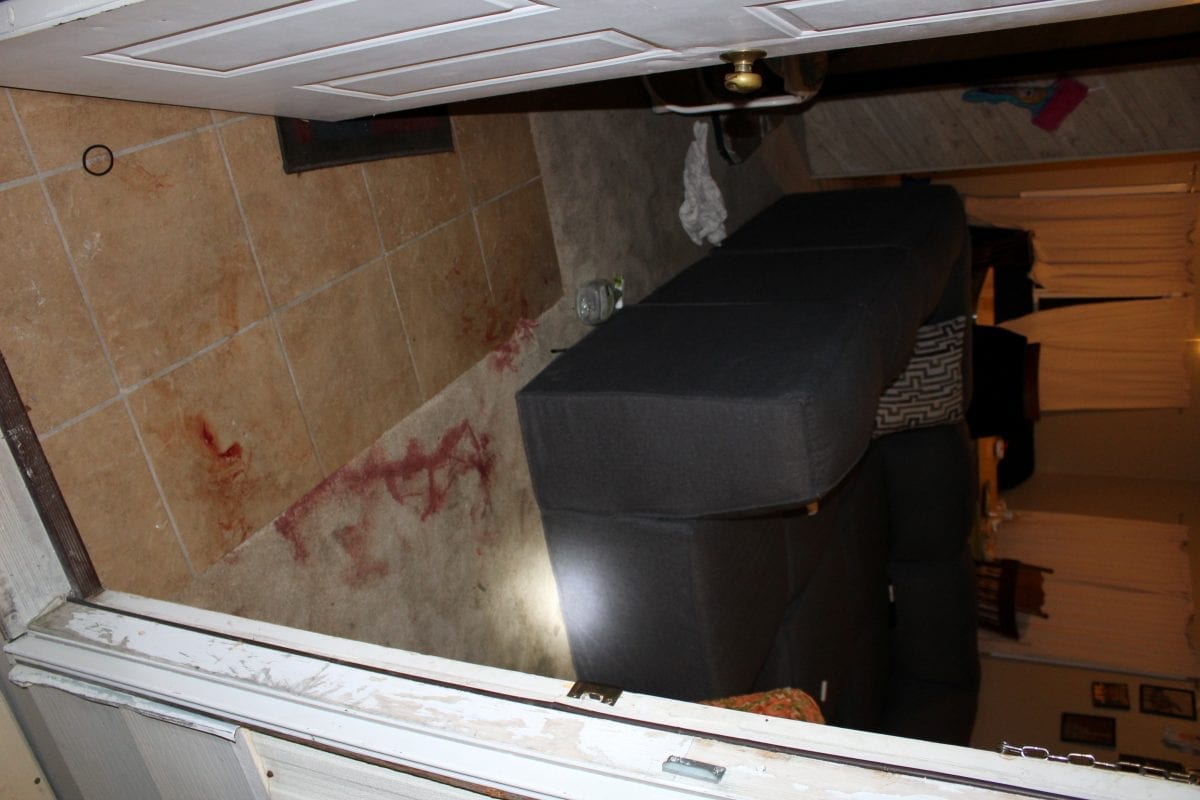 The mum, whose one-year-old son Daviam was asleep on the couch, said: “When it punctured me I screamed so loudly.

“I think David was in shock because there was a lot of blood.

Ashley – whose eldest daughter Corrayah was staying at her gran’s house – said Gifford then tried to stab himself before handing her the blade and telling her to kill him.

When she refused, she claims he said: “Well I’m going to kill you then.” 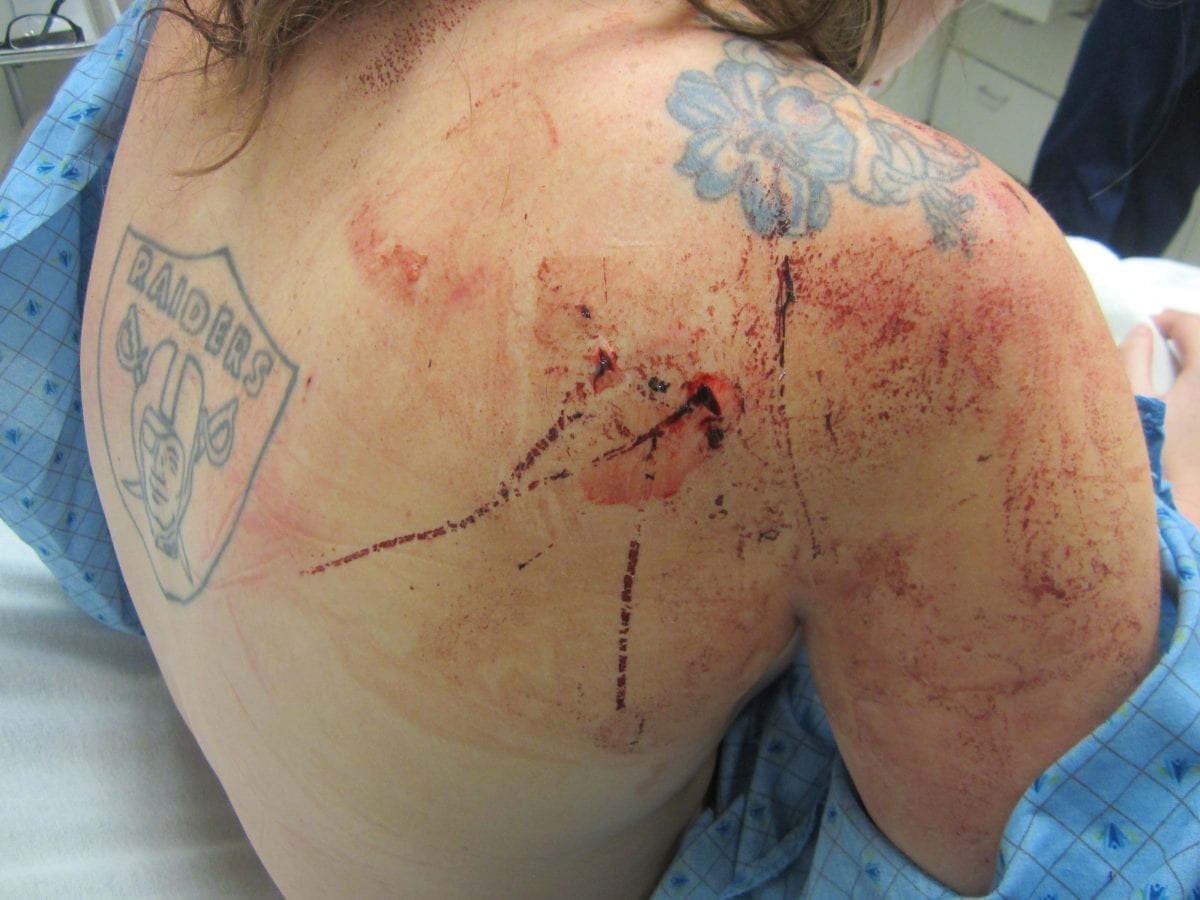 The ordeal only came to an end when Ashley managed to convince Gifford to stop attacking her, promising him that she would commit suicide so he wouldn’t go to jail.

Incredibly, she persuaded him to call a close friend to help him clean up but when the pal arrived she staggered outside and police were called to the scene at around 10pm.

Gifford – Ashley’s on-off boyfriend since 2011, and the father of her youngest son – was arrested and later jailed for the assault at Cassia County Court in Boise, Idaho.

The prosecutor dismissed felony charges of attempted strangulation and injury to a child as part of a plea arrangement.

Ashley said: “When David and I started dating in June 2011 he was kind and sweet. He was so romantic in the beginning.

“He would buy me cute messages in a bottle and gourmet chocolates. He was perfect.”

Over time the pair began rowing so separated in 2013, and university graduate Ashley went on to date another man. 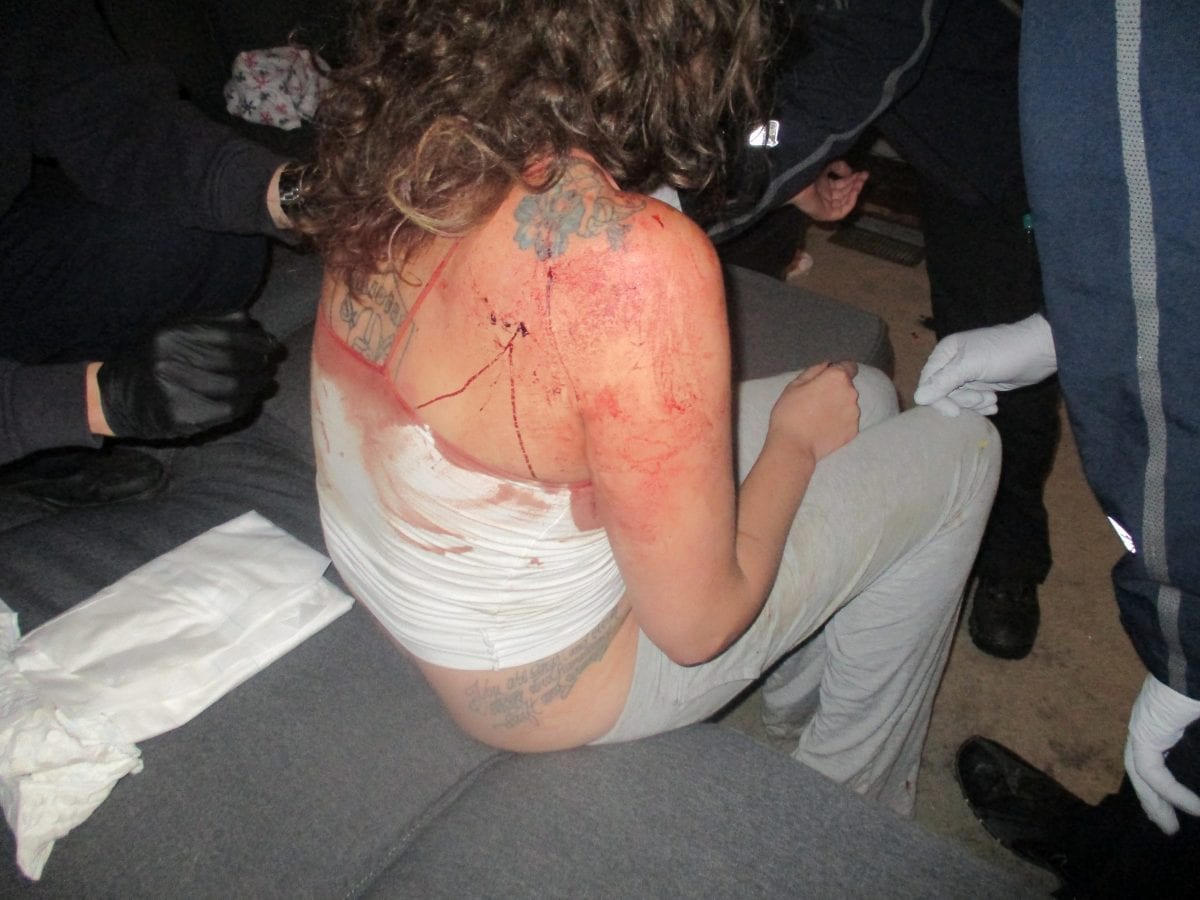 But in November 2015 the mum was admitted to hospital after that partner beat her so badly she suffered broken ribs and a concussion.

“I ended up calling David for help and he was right there, no questions asked. It ended up pushing me back to him.”

They had a baby, Lucifer, whose name Ashley is currently changing to Daviam, in July 2017 and were “so happy”, Ashley said. But she claims he later became “combative”. 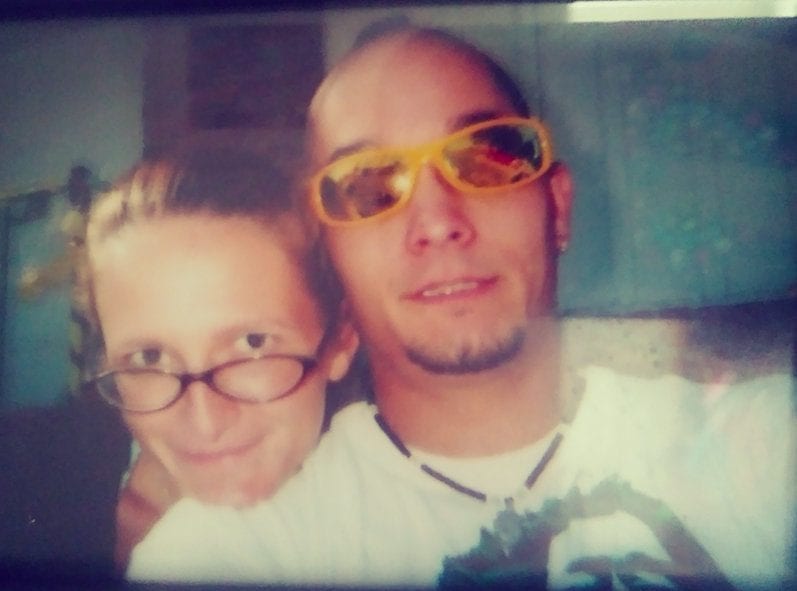 On the day of the attack, Ashley said she initially wasn’t frightened when Gifford came home angry because he had never hit her before.

He smashed plates and tried to start a fight, so Ashley attempted to call the police. But David flipped, shoved her onto the bed and began his brutal assault, the court heard.

Despite Gifford being jailed, Ashley said the incident continues to haunt her and the thought of celebrating Thanksgiving this year fills her with dread.

Little Aason, now three, also remains scarred by the ordeal and Ashley – who is sharing her story to give other domestic violence victims courage – fears he will never fully recover.

She said: “It has been extremely rough. Aason is not the same little boy any more.

“Before all this happened he was very sweet, calm, loving and gentle.

“Now he fights with everybody. He screams and breaks things. He is volatile and combative. He is traumatized. It has probably disturbed him.

“I’m a pretty tough cookie. There is not a whole lot that can upset and hurt me. The only way to get a rise out of me is through my kids.

“There is no doubt in my mind that he did it on purpose to hurt me.”