In a statement read out to the court, his the victim's wife said: "He is confused and fearful – he feels that he has lost all faith in the system." 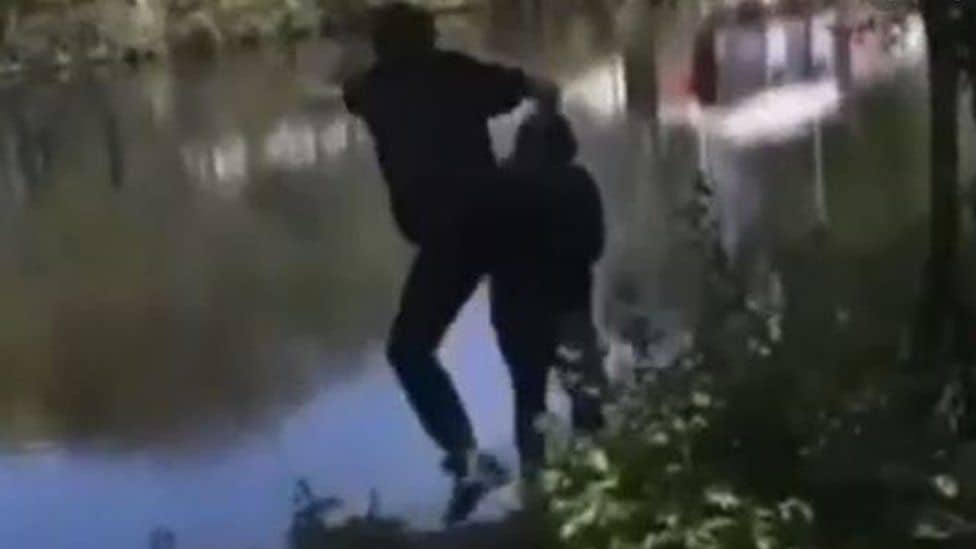 A teenage thug filmed kicking an OAP into a river in a “sickening” viral video that caused national uproar has been jailed for ten weeks.

Benjamin Bridgeman, 19, was filmed carrying out the cowardly attack before running away laughing as his 74-year-old victim struggled in the River Mersey in Warrington.

The video shocked the nation when it went viral following the incident in April, as it emerged two teenage girls came to the man’s aid and pulled him out of the river.

The man, who had been fishing at the time, walked home “freezing cold” where he told his family who then reported it to the police.

Bridgeman was sentenced at Warrington Magistrates Court today (Thurs), when it was heard the victim, who was not named, is “completely changed” as a result of the ordeal.

In a statement read to the court, the man’s wife said his mental health has declined, he is confused and “fearful” of going out as he thinks “all teenagers are trouble”.

Deputy district judge Ian Barnes said Bridgeman, who was 18 at the time and admitted assault at a previous hearing, committed an “extremely serious offence”.

Sentencing him to ten weeks behind bars, he added: “This involved a kick to a person who was isolated, standing by the river.

“We have the frankly quite sickening video.

“You ran away afterwards, leaving him struggling in the water. It clearly had a massive effect on the victim in this case.

“It was not reckless, it was a deliberate act, that’s quite clear.”

Judge Barnes said he had no choice but to hand down a custodial sentence as the defendant had failed to engage with probation officers for previous offences.

The court earlier heard the elderly man was stood on the banks of the river while magnet fishing at around 2.30pm on Sunday, April 25.

Bridgeman then callously delivered a sickening flying kick to his back, causing him to career into the Mersey and bang his head as he fell.

He suffered a cut to the face as a result.

He had been wearing a puffer jacket at the time of the attack, a coat which quickly filled up with water and left him struggling to breathe or exit the fast-flowing river.

The victim “just about managed to keep his head above water” before he was rescued by two Good Samaritans.

Judge Barnes said “considerable credit” should go to the young girls who formed a human chain to haul the OAP from the water.

After walking home soaking wet and shivering, his family reported the incident to the police.

Bridgeman, from Warrington, handed himself in at a police station following a public appeal for information over the assault.

After admitting the offence at a court appearance last month, Bridgeman issued a public apology outside court in a moment that was caught on video.

Speaking to a reporter from the Warrington Guardian newspaper, he said he expected “to do time” for the offence, adding: “Obviously I’m very sorry.

“You’ll see me do my time, which I deserve.”

In a statement read out to the court, his the victim’s wife said: “I feel I have seen a decline in his mental health – I have tried to get him to go and see a doctor, but he is refusing to get help.

“He is confused and fearful – he feels that he has lost all faith in the system.

“The incident has made him think that all teenagers are trouble and would treat him in the same way if given the chance.

“We used to go for walks along the river, but since the incident he is refusing to do so – particularly near any kind of water – as he is scared of being assaulted again.

“He feels he is lucky to be alive and I agree with him, because he might have drowned.

“This incident will have an impact on him for the rest of his life.

“I can only hope that in the coming weeks and months he will be able to process what has happened.”

A 15-year-old boy who uploaded the clip to Snapchat admitted assault and was handed a 12-month youth referral order on June 4.

Speaking after the sentencing, Inspector Daniel Haddock from Cheshire Constabulary, said: “This was a disgraceful act which not only shocked the local community but the nation.

“What the pair saw as funny could have cost this man his life. They have also taken away what was once a favourite and enjoyable place for him to go fishing.

“It is pure luck that two teenage girls were walking past at the time and saw him in the water.

“Without a second thought they came to his aid and pulled him to safety. It is their actions that restore our faith in humanity.

“At the time our appeal for information generated an overwhelming amount of support from the public which we are grateful for. It meant they had no choice but to hand themselves into the police and admit to what they had done.

“I know how much of an impact this has had on the gentleman.

“I only hope the support from the community, and knowing those responsible have been punished for what they did, helps him to feel comfortable to one day return to his favourite place.”

He tries to explain why he did it.

Related: Video: Racist tormenters who called woman a ‘big black dog’ and appear to perform Nazi salute at her