Blue Cross ‘Tap Dogs’ will soon be spotted across the UK thanks to support from PayPal. The team of four-legged fundraisers, who wear special dog coats with contactless payment devicses fitted in a pocket, is increasing. The new team of Tap Dogs will be taking £2 donations at events from 10 March 2017 when Gracie […] 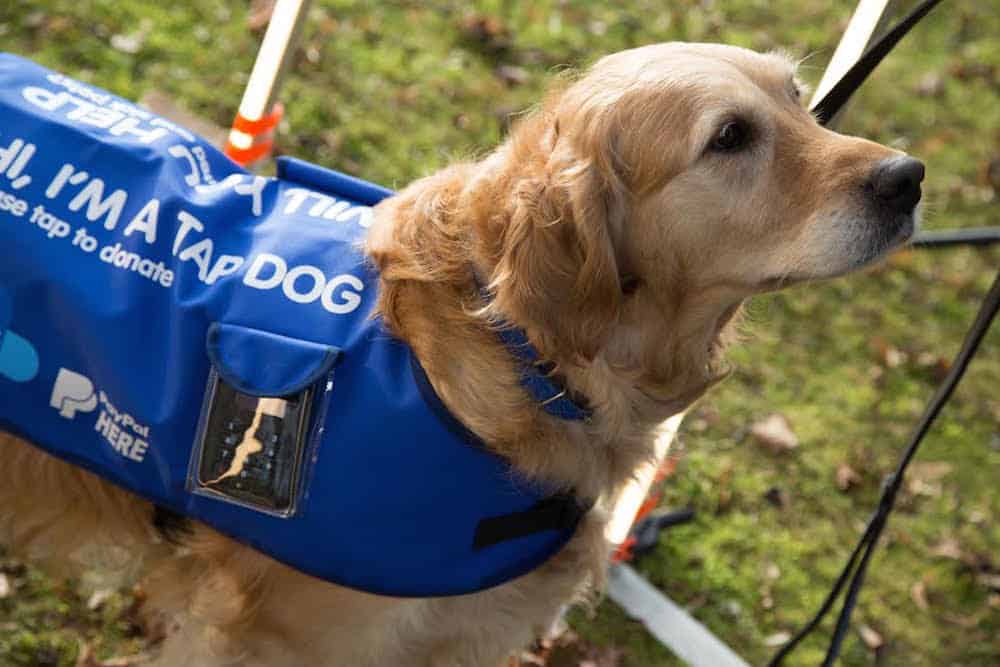 Blue Cross ‘Tap Dogs’ will soon be spotted across the UK thanks to support from PayPal. The team of four-legged fundraisers, who wear special dog coats with contactless payment devicses fitted in a pocket, is increasing. The new team of Tap Dogs will be taking £2 donations at events from 10 March 2017 when Gracie the Italian spinone will reveal the new dog coats at Crufts 2017.

Anyone wishing to donate can simply ‘pat and tap’ the dog to make a £2 donation using their contactless payment card or smart device (smartphone or watch) – or speak to its Blue Cross volunteer if they’d like to give a different amount.

Prototype coats were created and trialled in 2016, principally to raise awareness of the charity’s work helping thousands of abandoned, homeless, sick and injured pets every year. PayPal offered its support for the scheme and funded a range of new contactless dog coats and donated PayPal Here card readers for each of the coats.

Julia McKechnie-Burke, Director of Fundraising, Marketing and Communications at Blue Cross said: “Tap Dogs were created to raise awareness of our work helping thousands of pets every year. We were limited in the capacity of Tap Dogs as a fundraising tool with our prototype coats but now, thanks to PayPal, we are able to expand the scheme and have Tap Dogs at even more events. We are in an increasingly cashless society and need to be versatile in the ways people can donate to us. We love that dogs are able to directly help us raise funds as pets are at the heart of everything we do. We are grateful for PayPal’s support and look forward to exploring further expansion of this scheme and other initiatives.”

Tap Dogs are behaviour assessed Blue Cross event dogs, mainly owned by dedicated volunteers. They regularly visit events to raise awareness of many different aspects of pet welfare but they have never before had the chance to play such a direct role in helping the cats, dogs, horses, rabbits, guinea pigs, chinchillas, mice, guinea pigs (and many more) that Blue Cross cares for every day.

Bas Gevaert, Director of PayPal Here in the UK said, “PayPal is proud to support this new initiative which allows people to easily donate to Blue Cross using contactless cards. It goes without saying that fewer people carry cash on them now, so this new way to make donations with a card or smart phone really highlights how forward thinking Blue Cross are as a charity.
It’s such a fun and innovative way, not only for people to donate to a charity but actually get to engage with what the charity does as well. It’s nice to think that rescue dogs are helping to raise money for other rescue animals.”

The mechanics behind the Tap Dog technology is very simple. It consists of PayPal’s contactless card reader sitting in a pocket of the Tap Dog’s coat linked to the PayPal Here smartphone app via Bluetooth. The card reader accepts contactless payments by card or smart device phone or watch. The app is operated by a Blue Cross volunteer via a smartphone. It is set up to take a £2 donation. Donations for other amounts can be adjusted by the volunteer using the app and receipts can be issued by email or a text message if required.

Click here find out more, see a video of Tap Dogs in action and find out where they will be fundraising in 2017. Follow us on social media #patntap.

Read The London Economic’s recent article about a dog called Goofy who couldn’t find a home.