By Michael McNulty The office is abuzz with the conversation typical to a Friday afternoon. What are you going to do tonight? But, who needs to make plans when you’ve got a Forgotten Film Friday picked and ready for viewing? Not you, it’s time to sit back, relax and enjoy this weeks offering. Given the […] 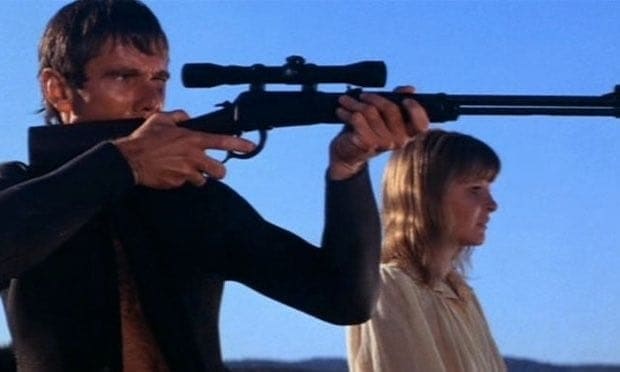 The office is abuzz with the conversation typical to a Friday afternoon. What are you going to do tonight? But, who needs to make plans when you’ve got a Forgotten Film Friday picked and ready for viewing? Not you, it’s time to sit back, relax and enjoy this weeks offering.

Given the attitude and opinions concerning environmental policy of a certain person, who lives in a Big White House, Long Weekend feels all the more relevant today.

Shortly after the film Long Weekend begins we hear, in the background, a report on a flock of cockatoos invading and attacking homes in the western suburbs of Sydney. The Department of Agriculture can provide no explanation other than, perhaps, a disruption in the bird’s diet forcing them to find different sources of food. And so the scene is set.

Long Weekend written by acclaimed writer Everett De Roche and directed by Colin Eggleston is a horror-thriller framed within a relationship drama. Centred on a dysfunctional couple, Peter (John Hargreaves) and Marcia (Briony Behets), who escape the city to go camping (although with Peter’s $2000 dollars’ worth of camping equipment, it’s more like glamping) in a secluded woods at Moondog beach in a desperate attempt to reconnect and rekindle a romance that is damper than a puddle.

What ensues is a camping trip from hell. The two argue and fight, before the root of their dysfunction is made clear, an affair and an abortion. However, Peter, Marcia and their drama are bit parts in a wider story. It is their wanton disregard for nature; Peter throws a cigarette out his car and starts a fire, kills a dugong and fires his newly bought rifle blindly into the beautiful natural surrounds, while Marcia is willing to abandon their dog, steals an eagle’s egg and smashes it, which gives the film its meat.

Slowly nature begins to hold them accountable for their actions and the two suffer the consequences as they are attacked, invaded and haunted by birds, possums, ants and the chilling cries of a dugong pup. There is a slow burning intensity to it all that grows bit by bit as the happenings move from justifiable consequences of being out in the bush to a resounding crescendo of realization that the surrounding nature has a much more sinister agenda.

It is here that Long Weekend really excels. Beneath the veneer of a brilliantly suspenseful thriller in which none of the creature-feature horror feels exploitative, a statement is being made. Like the tagline suggests, Peter and Marcia are trespassers, they are the true villains of this film. They are not the ones who are fighting to survive, but the nature they have dumped themselves in that is.

Long Weekend works as a commentary on our interactions with the environment and throwaway culture, from the bottles Peter throws into the sea to the tree he wants to cut down just because. So beware the squawking of the man in the Big White House when he says global warming is an expensive hoax, because if Mother Nature has anything to say about it we may be paying with our lives.