This is the shocking moment a broad daylight mass brawl involving 20 people erupted in the street outside a magistrates court building. Dramatic phone footage shows punches and kicks being traded between the group – with one elderly man even wading into the fight to use his walking stick as a weapon. The melee is […] 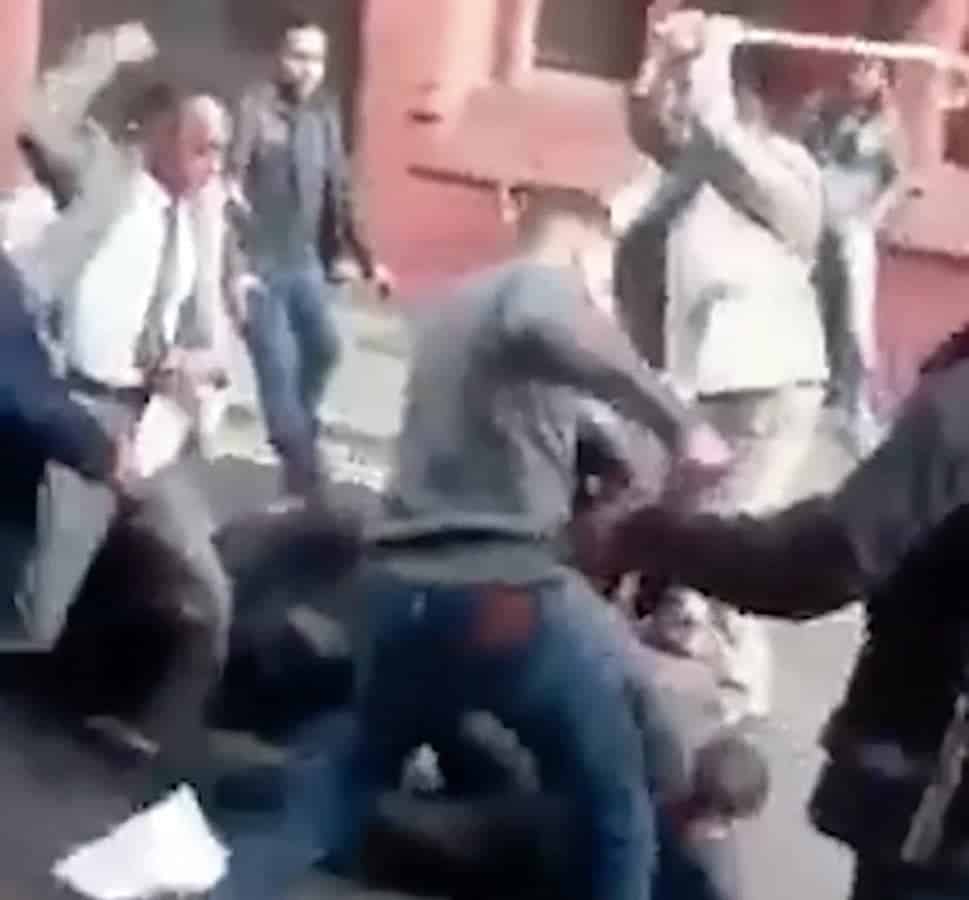 This is the shocking moment a broad daylight mass brawl involving 20 people erupted in the street outside a magistrates court building.

Dramatic phone footage shows punches and kicks being traded between the group – with one elderly man even wading into the fight to use his walking stick as a weapon.

The melee is believed to have started after a victim and his relatives were let out at the same time as the defendants following a case at Birmingham Magistrates’ Court.

Police arrested eight men and are appealing for witnesses after three people were taken to hospital following the shocking scenes at 11am on Friday morning (6/10).

In a mobile phone clip filmed by passers-by the group can be heard arguing before the violence breaks out and quickly descends into a “Wild West-style” brawl.

Detectives are now appealing for anyone who recorded the fight on mobile phones to get in touch.

Detective Inspector Tom Hadley, of West Midlands Police, said: “This was a very violent disorder outside the city’s law courts in the middle of the day.

“It’s completely unacceptable and no doubt would have been frightening for many members of the public.

“Officers were on the scene quickly and arrested eight people who were believed to have been involved.

“We’re examining CCTV footage but we know several people stopped to record the fight on their phones.

“Clearly this footage could be hugely valuable for the enquiry in identifying the ringleaders and who was involved in the violence – and I’d urge them to get in touch.”

A barrister, who did not wish to be named, said: “It all started when the victim and his relatives were let out of the building at the same time as the defendants.

“One man was left covered in blood. The police and ambulance were called.”

Six men, aged between 21 and 61, plus male youths aged 16 and 17, have been arrested on suspicion of violent disorder and affray.

Three people were taken to hospital with facial injuries, with one having suffered a suspected broken hand, but no-one is understood to have been seriously hurt. 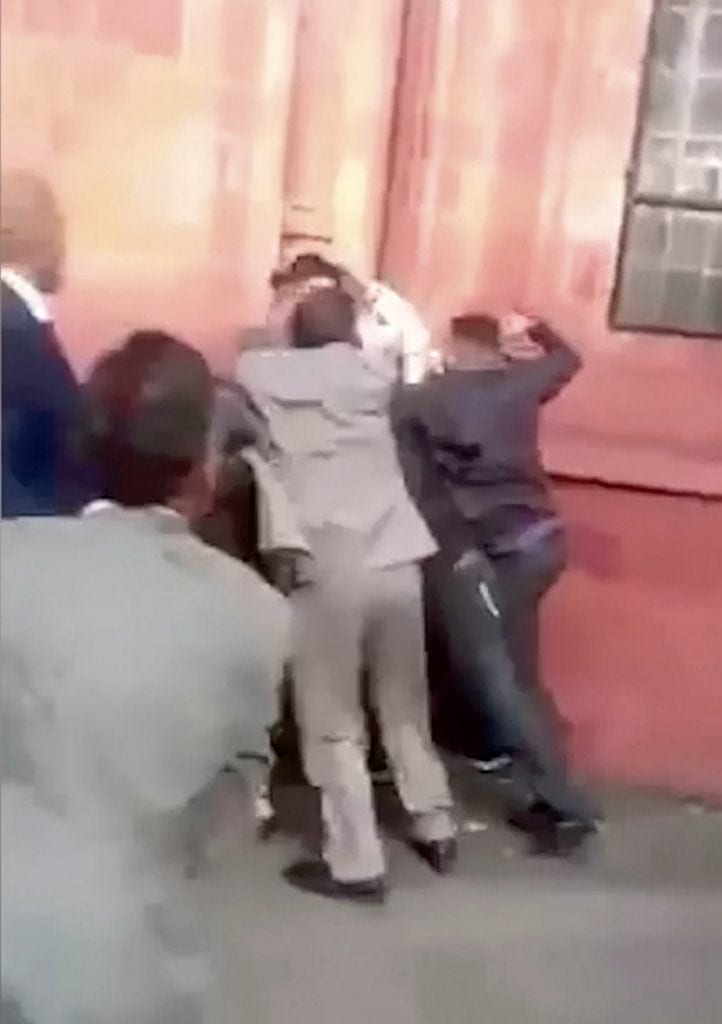 A West Midlands Ambulance Service spokesman said: “We were called at 11.19am to the junction of Newton Street and Corporation Street.

“We were called to reports of a fight. Three ambulances attended in total.

“We have treated four patients. A man in his 40s with cuts to his arm and head – he was given pain relief and taken to hospital.

“A second patient, a man was treated for cuts to the head and given pain relief and taken to hospital.

“The third patient was given pain relief for a chest injury and taken to hospital.

“The last patient was discharged at the scene after receiving treatment for cuts and grazes to his arm.” 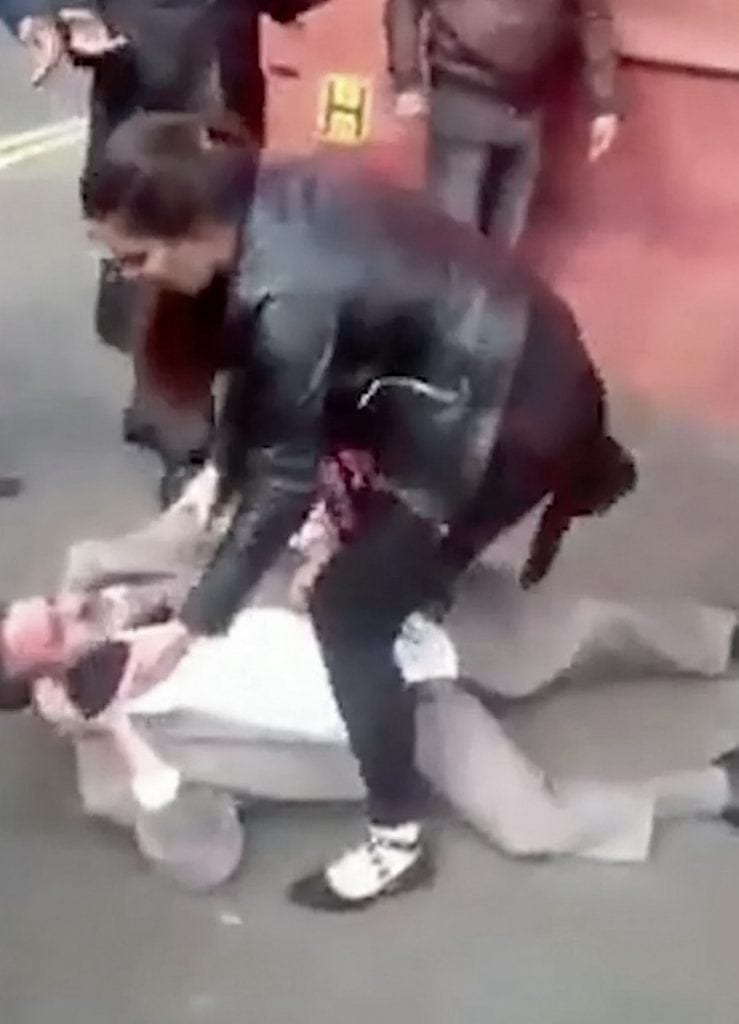 After the video was posted on social media, web users flocked to condemn the violence.

Emma Harrison wrote: “Disgusting behaviour by fully grown men. It was in broad daylight and kids would have seen this. Utter disgrace. Throw the book at them.”

Dave Carter added: “Looks like something straight out of the Wild West. Crazy scenes.”

Witnesses or anyone with information about the disorder is urged to contact West Midlands Police Investigation Team in Force CID on 101.