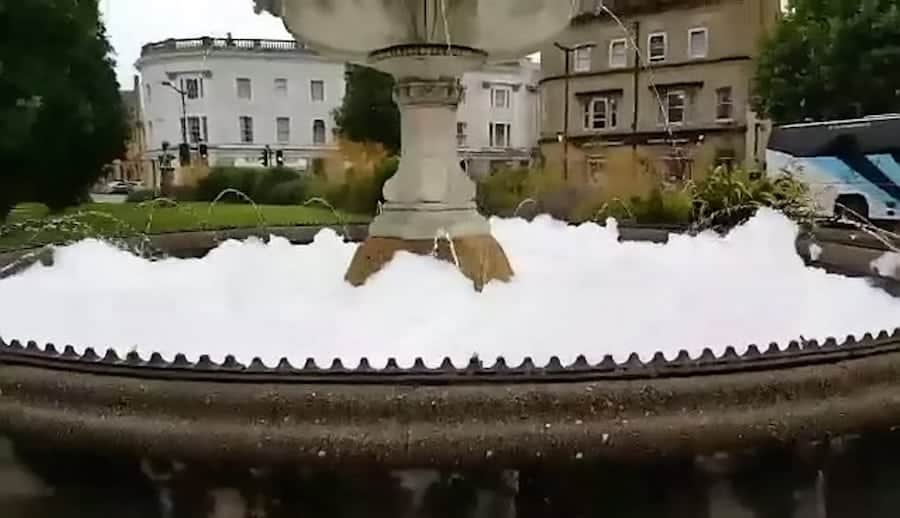 Reams of fluffy bubbles could be seen seeping out onto the high street in video footage posted on social media following the random attack on Wednesday.

The stunt was orchestrated by mischievous youths who reportedly threw unknown quantities of the washing up liquid into the sandstone fountain.

Within minutes, the fountain in Barnstaple Square, north Devon., was a sea of soapy bubbles and maintenance staff had to add anti-foaming chemicals to the water.

A bystander, who does not wish to be named, captured video footage showing the frothy bubbles about to breach the sides of the fountain.

The fountain dates back to the 17th century and had thousands of pounds spent on its restoration and upkeep.

The landmark, which is owned by North Devon Council, has also had its pump system repaired in recent years.

North Devon Council parks officer Andrew Moulton said: “Although it may seem like a fun prank, we would prefer people not to add bubble mix to the fountain.

“It takes time and money to fix, as we have to send someone out to add anti-foaming chemicals to the water.

“The fountain is now working well after restoration work last year and we would hope that people help to look after this historic feature.

“The Square is covered by CCTV, which we hope will act as a deterrent.”