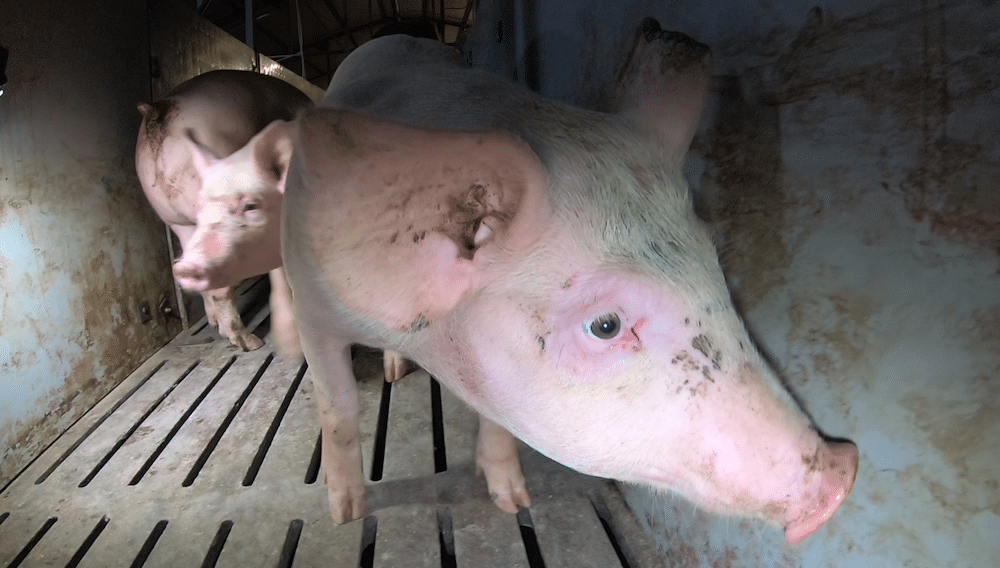 Sadly, this isn’t the first time this farm has been in the limelight. Last year, Viva! Campaigns’ undercover team hit the headlines by exposing shocking conditions at Hogwood pig farm in Warwickshire where they discovered severe overcrowding, pigs covered in excreta, barren, filthy conditions, animals abandoned to die, cannibalism of corpses left to rot amongst the living and decaying piglets were engulfed in a sea of writhing maggots.

The initial 2017 investigation was reported to the government’s Animal and Plant Health Agency (APHA), Trading Standards and Tesco, all of which denied that there were any issues on the farm, with Tesco claiming, “We take animal welfare extremely seriously and expect all our producers to meet recognised farm assurance standards, including Red Tractor certification, as well as our own stringent, industry leading requirements.”

Following this report Viva! Campaigns demanded Tesco stop using this farm as a supplier. Despite the damning evidence, public pressure and over 300 demonstrations organised by Viva! Campaigns outside their stores nationwide in 2017, Tesco refused to drop Hogwood farm. They publicly denied that the farm had any failures and vowed to continue buying meat from the farm, claiming they were happy to continue using Hogwood as a supplier.

Their blatant denial of hard evidence questions the integrity of Tesco and their identity as a trustworthy consumer brand. Failure to acknowledge the incidents discovered at Hogwood farm also raises the question of how closely organisations such as Red Tractor, Tesco and APHA work together to conceal the truth about our country’s farming industry. An industry which is worth £8.2 billion yet is shrouded in a web of lies and smokescreens.

Following a tip off that conditions had not improved, Viva! Campaigns decided to revisit the farm in July 2018. Once more, the team discovered animals dumped in a gangway with no access to food or water with no escape, filthy barren sheds and a complete disregard for animal welfare.

Trapped in a gangway, beneath a mass of pig bodies lay a blood bath where one living piglet was being cannibalised. Farm Animal Welfare Council (FAWC) guidelines state dead animals should be removed from the living and diseased animals should be kept in isolation. Cannibalism is not natural behaviour for pigs and is caused by this bleak environment.

An investigator who witnessed the scene explains: “My stomach began to churn as I watched the three pigs surrounding her, each in turn, pull at her trotters with their teeth. Her flesh bitten from the bone and the blood pulsating onto the wooden slats beneath her, I was mortified. We needed to get out and we needed to report this! And so we left, horrified and heart-broken.”

Investigators reported their findings immediately to the RSPCA and local police explaining the clear breach in animal welfare. After some persuasion the RSPCA called a local vet to the scene, a cattle specialist who freely admitted having no experience in dealing with pigs. Viva! Campaigns have since requested a full veterinary report from the RSPCA but to date have not yet received any response pertaining to the incident of cannibalism or the welfare of pigs more generally inside Hogwood farm.

Viva! Campaigns’ most recent footage has been submitted to APHA, only to receive their generic reply which states that they take all reports seriously and will endeavour to investigate further. Viva! have submitted countless reports of unnecessary suffering and cruelty to APHA on a range of British farms, each one authenticated with dated images and a written summary of the findings. Despite providing indisputable evidence of animal welfare issues, APHA rarely respond to Viva!’s reports. At best, they acknowledge receipt of the information but never anything more.

Founder and Director of Viva!, Juliet Gellatley, explains the importance of this investigation: “Our initial investigation showed pigs so tightly crammed into a disgustingly dirty industrial unit that it was hard to walk through them. Many were covered in lacerations and all were smeared in filth. Mothers were kept in crates, forced to birth on cold concrete floors with no space to move or interact with their young.

“Despite the overwhelming amount of damning evidence exposed at Hogwood in 2017, both the government and regulatory bodies overseeing the industry have failed to issue any sanctions to this farm. There have been no repercussions for the people who are keeping these animals in such horrific conditions. “Our second investigation shows that Hogwood farm is contemptuous towards animal welfare; with pigs kept in filthy, barren conditions and injured and ill pigs still being left in a gangway with not even a blade of straw for comfort. One little piglet at the bottom of the heap was visibly shaking – she was being eaten alive! Her hind legs were injured and bloodied and the blood was smeared over walls and floor. Other pigs were biting at the exposed flesh. It must have been excruciatingly painful and the look on her face will live with us forever. She was making no effort to escape – there was nowhere for her to go – and so all we could see was her absolute and total dejection and pain. It was mortifying – something none of us ever want to see again.

“What purpose does the government’s legislation serve if it cannot protect animals in farms such as this? The blatant lack of concern from Tesco has demonstrated they do not practice what they preach and their consumers should take heed that this farm will not be an isolated case, if Tesco are happy to buy from this hell- hole, where else are they buying from?

“I believe anyone with a heart seeing the state of the animals in today’s modern farms would want factory farming to end. Hogwood Farm is not some aberrant little farm, it is large scale with about 16,000 pigs [5] and typifies large scale institutionalised cruelty, sanctioned by a giant supermarket chain and the British government and it must end.”

Unfortunately, these conditions echo the lives of most pigs in Britain (and elsewhere), who endure short and brutal lives on farms where their welfare is of far lower importance than production.

In light of the shocking investigation at Hogwood, Viva! has asked that Tesco takes action against these atrocities and stops buying meat from this farm. It is their duty to their consumers to whom they say “We take animal welfare extremely seriously”.

Despite the abhorrent findings of Viva! Campaigns at Hogwood and the ignoring of reported cruelty and neglect the public is still being spun the line that we have the ‘best animal welfare in the world’. The sweeping under the carpet of animal cruelty and abuse can never be justified, and it must end.