Tom Moore, 99, says the NHS have been "marvellous" in helping him recover from both a hip replacement, and skin cancer on his head, 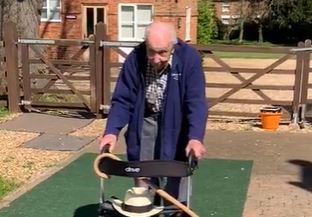 A World War Two veteran who is walking 100 lengths of his back garden before his 100th birthday has raised over a MILLION pounds for the NHS in just one WEEK.

Tom Moore, 99, says the NHS have been “marvellous” in helping him recover from both a hip replacement, and skin cancer on his head, over the last couple of years.

As a way of saying thank you, the former civil engineer has been doing daily laps of his 25-metre long garden, with the aim of walking 100 lengths – or 2,500 metres – by his 100th birthday on April 30.

Tom, who began his walks last Monday (April 6), initially set a fundraising target of £1,000 for NHS Charities Together, only expecting support from his village of Marston Moretaine, Beds.

But after hitting headlines last week, Tom quickly smashed through his target – and has now raised over £1.3million for frontline health workers.

He told the BBC: “I thank the British public from the bottom of my heart.

Tom added: “It’s difficult to imagine all these kind people who have donated so far. It’s just amazing.”

She took to Twitter to say: “We are overwhelmed by the response. It’s extraordinary. We remain proud and humbled by the generosity of the British public.”

Tom was born and raised in Keighley, Yorkshire, where he went to grammar school and later went on to complete an apprenticeship as a Civil Engineer.

He was then enlisted in 145 Regiment Royal Armoured Corps at the beginning of the war, and in 1940 was selected for Officer Training.

After completion, Captain Tom Moore went on to be posted in the 9 DWR in India and served and fought on the Arakan and Burma.

After all overseas duties were said and done, Tom returned to the UK to become an Instructor at The Armoured Fighting Vehicle School in Bovington, Dorset.