Crematoriums across the UK have imposed tough rules for funerals, with some limiting the number of mourners to just five people 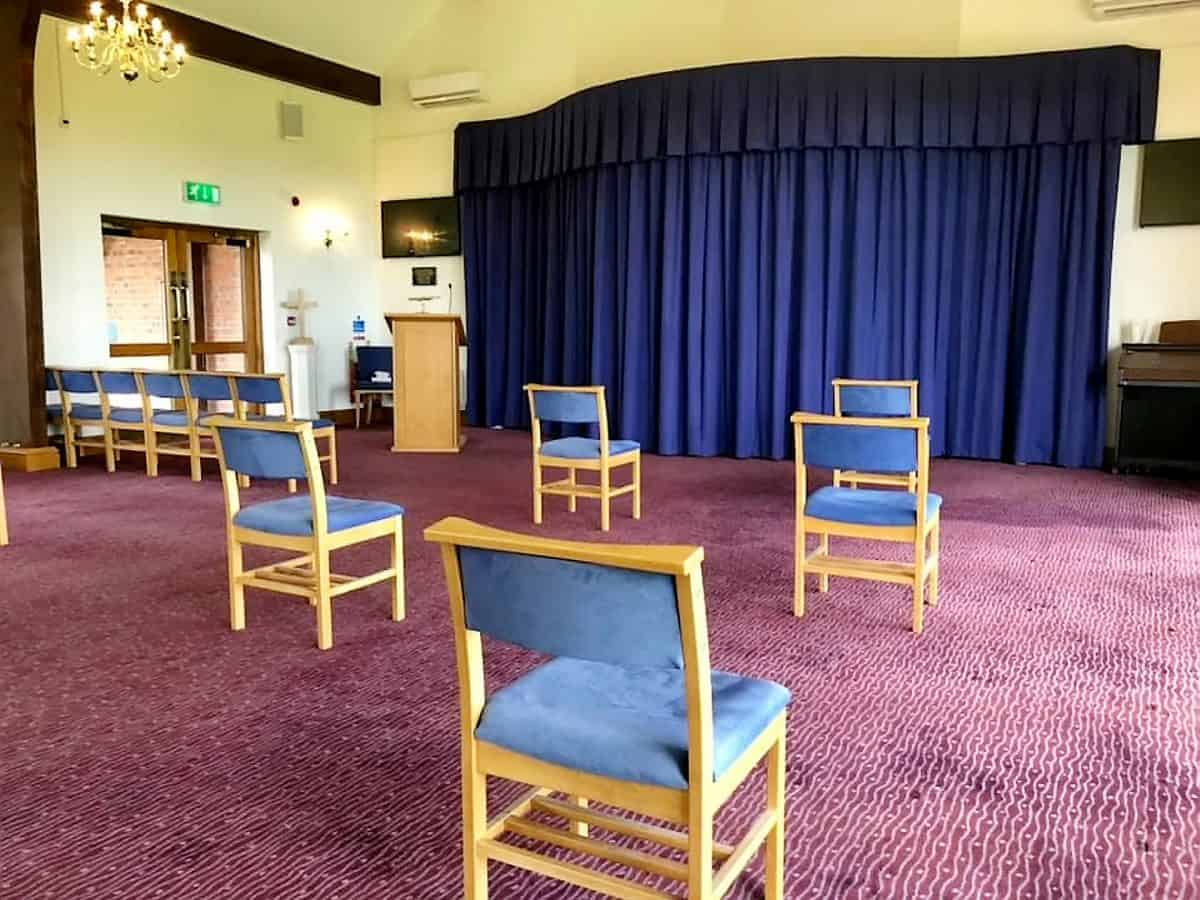 A poignant photograph shows five solitary chairs set aside for mourners at a UK crematorium as stricter coronavirus distancing rules are introduced for funerals.

The heartbreaking scene captured the sobering reality grieving families are having to face amid the COVID-19 outbreak which has forced Britain into lockdown.

The five empty chairs were placed two metres apart ahead of a service at an unidentified crematorium on Monday (23/3).

It comes as venues across the nation introduce tougher rules for funerals, with some limiting the number of mourners to five or just immediate family.

Boris Johnson announced funerals will still be allowed to go ahead, despite banning other social events such as weddings and christenings.

Those grieving deaths have already been advised to avoid hugging, kissing or shaking hands when consoling loved ones as well as not handling orders of service.

Now local authorities are stepping up measures to reduce capacity at crematoriums in light of the Prime Minister’s announcement on Monday night (23/3).

One clergyman, who wished to remain anonymous, said: “It breaks your heart to see scenes like this when conducting a service.

“Funerals should be a celebration of someone’s life, with friends and family surrounding each other for support and being able to hug each other.

“To see them reduced to such tiny numbers of people is a sad reminder of the crisis we are facing as a nation at the moment.”

One funeral director in Worcester has revealed some funerals are going ahead without anybody in attendance to say their final farewells due to the coronavirus fears.

Mark Campion, director of Jackson Family Funeral Directors, said many cremations were now being carried out without a funeral service beforehand to be safer.

He also said a vicar held out a broomstick at a recent service to keep people apart and other upcoming funerals due to have hundreds in the congregation will now only be attended by three close family members.

He added: “Things have dramatically changed for us. I have not seen anything like this in 36 years.

Guidelines, published by the Funeral Celebrancy Council and issued by Humanists UK, advise families only have “essential attendees” who must obey social distancing rules.

Isabel Russo, head of ceremonies at Humanists UK, said: “Our main priority is ensuring that we support bereaved families to say farewell to their loved one in a personal and meaningful way, while still following the guidelines to keep people safe.

“We are also urging the Government to issue specific advice for the funeral industry to bring clarity across the sector.”

The Funeral Celebrant Council’s Independent celebrant rep, Emma Curtis said: “Over the last week funeral celebrants around the country have felt a great deal of anxiety.

“The Funeral Celebrancy Council has responded swiftly to issue clear guidelines to funeral celebrants as a coherent approach to help protect, not only the health and welfare of the bereaved people we serve, but also our fellow professionals, and wider society.”

York Crematorium now only allows five mourners at a time and offers video streams of funeral services in a bid to stop the spread of the virus.

Elsewhere, The London Cremation Company, has followed suit and is only permitting 25 mourners at a time.

Dudley Council has written to funeral directors saying only next of kin, siblings and partners, parents, children and partners, and a carer if applicable, will be allowed to attend cremations .

Last week the Westerleigh Group – one of the largest operators of private crematoriums in the UK – announced that it would be implementing a number of new rules.

A spokesperson said: ““We are asking everyone to observe a sensible space between each other when they attend a service.

“We want to reduce the chances of the virus being passed on .

“We will ask mourners to avoid hand-shaking and hugging, which we understand is difficult at such a time, and we will also be encouraging hand-washing at the facilities we have made available.”