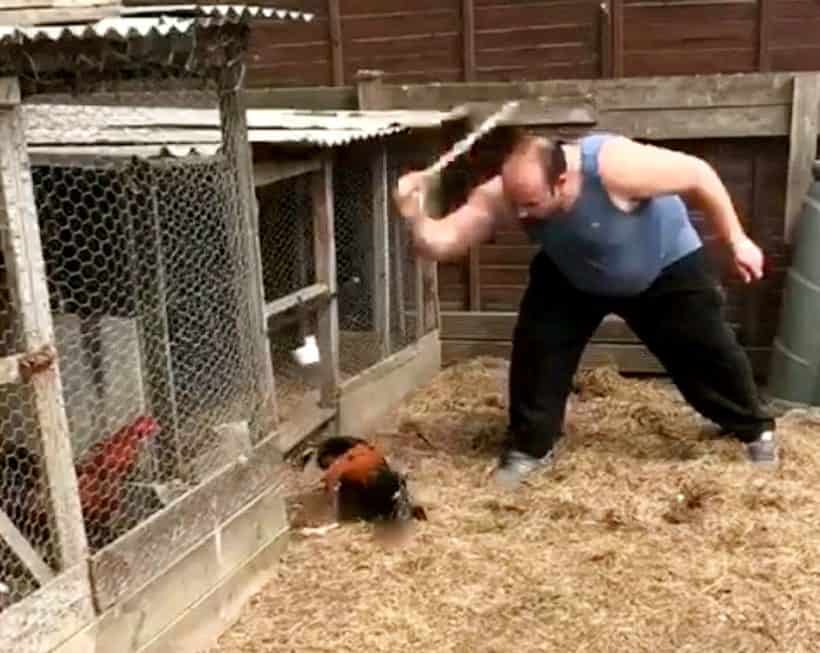 A man has been jailed after police found a video of him viciously beating a cockerel to death – with a metal kebab skewer.

The sick footage shows him holding the bird upside-down and beating his head “like a piñata” said and RSPCA boss.

Jimmy Goddard, 27, was jailed on Thursday after officer found the footage on his phone while investigating an unrelated matter.

The footage showed the man, wearing a blue vest, chasing a cockerel around a fenced area with a metal pole.

RSPCA Chief Inspector Will Mitchell described the violent footage: “Mr Goddard chases the bird around taking swipes with the 3ft-long metal skewer like a baseball bat.

“He then grabs hold of the cockerel, holds him upside down by his feet and, while the bird frantically flaps around and tries to escape his clutches, he beats his head with the pole.

“He swings at the poor bird again and again, hitting him in the head like a pinata. He then throws the bird’s body onto the ground and celebrates the vicious kill.

“It’s absolutely shocking to watch. His violent behaviour and the savage cruelty he shows towards this bird is difficult to comprehend.”

Goddard was sentenced to an eighteen week custodial sentence by the court and disqualified from keeping any animal for five years. He also had to pay £750 and victim surcharge of £115.

Sergeant Andy Williams from Hampshire Constabulary’s Country Watch team said: “We are pleased that Goddard has finally been punished for what really was a shocking and cowardly act against the animal.

“We work closely with our partners from the RSPCA on a variety of rural and animal welfare matters.

“Offences such as this have no place in modern society. When information is received about such offences, the Country Watch team is only too pleased to assist in investigating them and bringing offenders to justice.”

He was sentenced to 18 weeks in prison and banned from keeping animals.

In August 2018 he was found guilty in his absence of one offence of causing unnecessary suffering to the bird but he failed to attend court so a warrant was issued for his arrest.