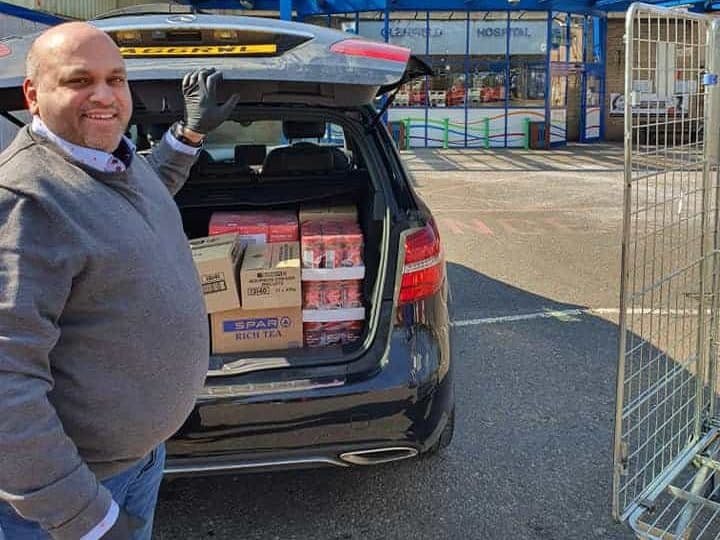 A well-loved shopkeeper has died of coronavirus at the same hospital where he delivered supplies to frontline staff just days earlier.

But just 13 days later the father-of-two lost his life to the killer virus at that very same hospital.

Many tributes have been made to the shopkeeper with a “big heart” as his death comes as a shock to the community he served.

Not only was 51-year-old Raj taking supplies to the hospital but, just days before that, he donated loaves of bread and sandwiches to the homeless – something he has done since 2018.

Raj was well known in Leicester and was described as a “real character” who ran two Spar shops and a coffee shop, Insomnia, in the area with is brother Sanjiv, 50.

They also had another Spar shop in Sheffield.

On March 27, he posted a picture of him arriving at the hospital with a carload of supplies.

His post reads: “Next stop Glenfield Hospital, Leicester, dropping off Tea, Coffee and Biscuits for our frontline NHS staff who are doing an amazing job #strongertogether.”

But by Thursday, April 9, Raj had died.

Paying tribute, his heartbroken brother said: “Raj started to feel unwell so he went into isolation but just eight or nine days into that he deteriorated and had to call for an ambulance.

“Paramedics said he was dehydrating and took him into hospital.

“At first he seemed to be on the mend but he soon went downhill and had to be taken into intensive care where he was critically ill.

“By last Tuesday he was on a life support machine.

“We finally got the call on Thursday morning to say he was not going to make it and we had to go in.”

Sanjiv went to the hospital with Raj’s wife, Sunita, and his children, daughter Ambika, 23, and son, Varun, 20, but only two members were allowed to see him, wearing protective gear.

His wife and son got to say their goodbyes.

Speaking today (Thurs) heartbroken Sunita described her husband as a “beloved” man who will be “missed by all who know him”.

She said: “He enjoyed life to the full and approached everything with a huge beaming smile… often putting the needs of others before himself.

“It is Raj the devoted family man who we will remember, he took immense pride in each and every one of our achievements as we did in him.

“As a family we are trying to come to terms with our loss but have taken great comfort in the outpouring of affection we have seen.”

One of a kind

Another nephew Ritesh and a niece called Rishika described their uncle as “one of a kind”.

His death has come to a complete shock to their whole family as Raj had no underlying health conditions.

Sanjiv is continuing work in their stores and has upped their protection.

He said: “We are trying to spread the word as much as possible how dangerous this is.

“But people are still coming into the shop and acting like nothing is happening.”

The pair followed in the footsteps of their parents who came over from India and opened a greengrocers shop over 50 years ago.

As yet Raj’s family do not know when his funeral will be.

They fear it will be hard to select which family members, of such a big and loving family, will be able to go.

Sanjiv said: “He was full of life, energetic – always wanting to help others, putting them first. He had a very big heart.

“He loved life and his business and his family.

“He was polite to anybody he met and he was always talking, he was a character who was fantastic at everything he did.

“He was an absolutely amazing brother.”

The family do not know where Raj picked the illness up from.

Raj also sat on the board of the Association of Convenience Stores and was known across the UK.

In a tribute the ACS said: “We were absolutely devastated to hear the news about the passing of Raj Aggarwal.

“This is a terrible loss that will be felt personally by many people in our industry.”

In a tribute Spar said: “He will be sadly missed by all his colleagues. Always positive, always smiling, always helpful.”