The Warwickshire Hunt chased and killed a fox in front of saboteurs the day after the 15th anniversary of the Hunting Act. 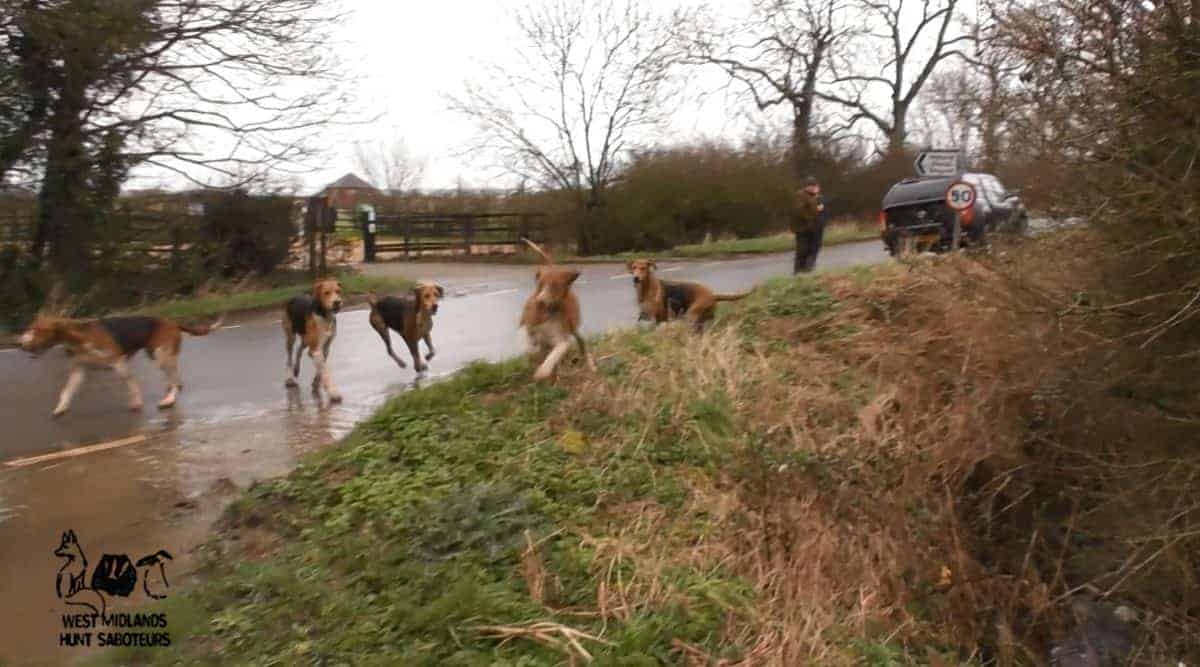 Shocking footage shows the moment a pack of crazed hounds appeared to maul a fox to death – the day after the 15th anniversary of the Hunting Act ban.

Members of the Warwickshire Hunt were filmed by saboteurs allegedly using their dogs to savage the defenceless animal in Lower Tysoe, Warks., on Wednesday (19/2).

Video footage shows the hounds swarming around bushes before a hunter jumps from his horse to remove the body away from the cameras.

Disturbing images then shows a chunk of flesh which had apparently been ripped from the fox lying in the bloodstained hedgerow on the A422.

West Midlands Hunt Saboteurs said it was the second time in a matter of months that the prestigious hunt had been filmed killing a fox.

A spokesperson for the group said “We saw the hounds chasing something down the hill towards Lower Tysoe.

“We drove round just in time to see a fox cross the road and dive into the hedge with huntsman and hounds close behind.

“The fox looked exhausted as if it had been running for some time. The hounds chased it up and down the hedge line before surrounding it and killing it.

“The hunts Whipper-In jumped off his horse and into the hedge where he grabbed the body and took it away from our cameras.

“Members of the Warwickshire Hunt physically prevented us from entering a field to help save the fox and even tried to block us from filming what was happening.”

Further footage shows the hounds causing chaos on country lanes by dashing across the road and holding up traffic.

Th saboteur spokesperson added: “They carried on as if nothing had happened and minutes later they were chasing another fox and the hounds ran out on the blind bend on Sun Rising Hill.

“It’s a busy road and the hunts actions could easily have caused a road traffic accident.

“Hounds and riders then went up and down the road causing tailbacks.

“This isn’t the first time we have witnessed the Warwickshire Hunt use a busy main road as their personal playground.

“We were subjected to vile and provocative behaviour from the hunt’s stewards all day which included homophobia, sexual comments and joking about mental health issues.

“It is ironic that this fox was killed almost 15 years to the day since the Hunting Act came into force to ban hunting.

“This fox kill serves as a reminder that 15 years later foxes are still being hunted and killed on a regular basis, that the Hunting Act with all of its loopholes is not preventing fox hunts from killing foxes.

“The Hunting Act needs to be strengthened, the loopholes got rid of and a recklessness clause added to prevent hunts from using the excuse that they ‘accidentally came across a fox and killed it.’

“What we need is a complete and total ban, however, until that time comes there will always be hunt saboteurs trying to save all hunted wildlife from the hunters.”

The Warwickshire Hunt have been contacted for a comment.