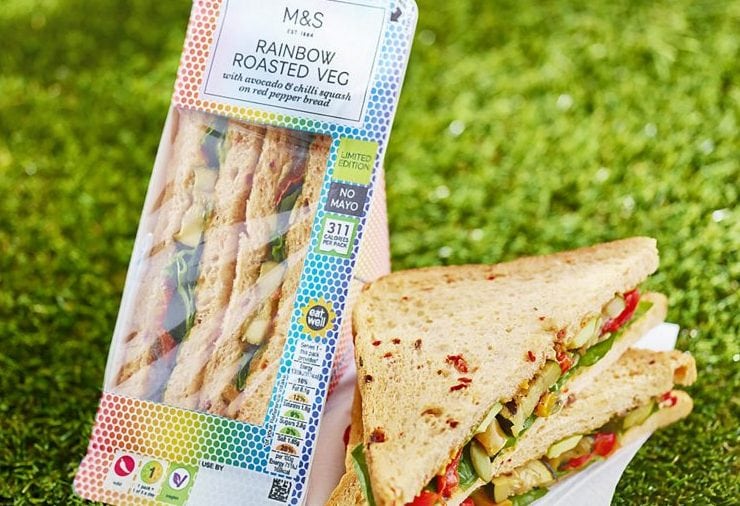 A special Marks and Spencer ‘rainbow’ sandwich to mark Pride has left a sour taste with some shoppers.

They have accused the High Street bellwether of using the celebration of LGBT culture to make money.

M&S has given its Roasted Rainbow Veg Sandwich a “makeover” with limited edition colourful rainbow packaging launched in stores this week.

But the vegan snack has got some people’s backs up, claiming the firm is trying to cash in on the ‘Pink Pound’.

Others even questioned why there is no packaging that “celebrates being heterosexual as well”.

Posting on the M&S Facebook page, Pat Purdy said: “Please, leave the PC out of food, fashion and drink.

“There is a time and a place for everything and this is not it.”

“A far cry from what it actually set out to be years ago.”

Sarah Bolton said: “You should not use people to make money! To entice a group!

“Stop all this silly nonsense and just except! Don’t need to celebrate anything and everything!

Keith Garland said: “Can we have packaging that celebrates being heterosexual as well?”

Recreationally Offended said on Twitter: “I don’t applaud it.

“It’s the sort of idea that only comes from middle management meetings with people called Pippa who did Meeja at one of the lesser universities.

“The Poly ones. ‘All the gays love rainbows. And vegetables! I know! Gay sandwich wrapper!’ Get stuffed, Pippa.”

Marks and Spencer said it will be donating £10,000 to LGBT charities around the UK.

Other shoppers were supportive of the packaging, saying anything that supports the LGBT community is welcomed.

Jade Lewis said: “I think this is fantastic.

“I work for M&S and I am really happy to be part of a workforce that is willing to support pride and the LGBTQ+ community, a community which is always been a part of me and my family’s life.

“It doesn’t matter if it’s just a sandwich, it could be anything, but it still shows that they are willing to support the community and i think that’s great.”