Preparations for the ‘wedding of the year’ involving Britain’s most violent prisoner Charles Bronson were today (Tues) underway. A suit believed to be the one hardman Bronson, 64, will wear when he ties the knot to soap star fiancee Paula Williamson was hand-delivered to HMP Wakefield at 10am in a white cotton bag. A black […] 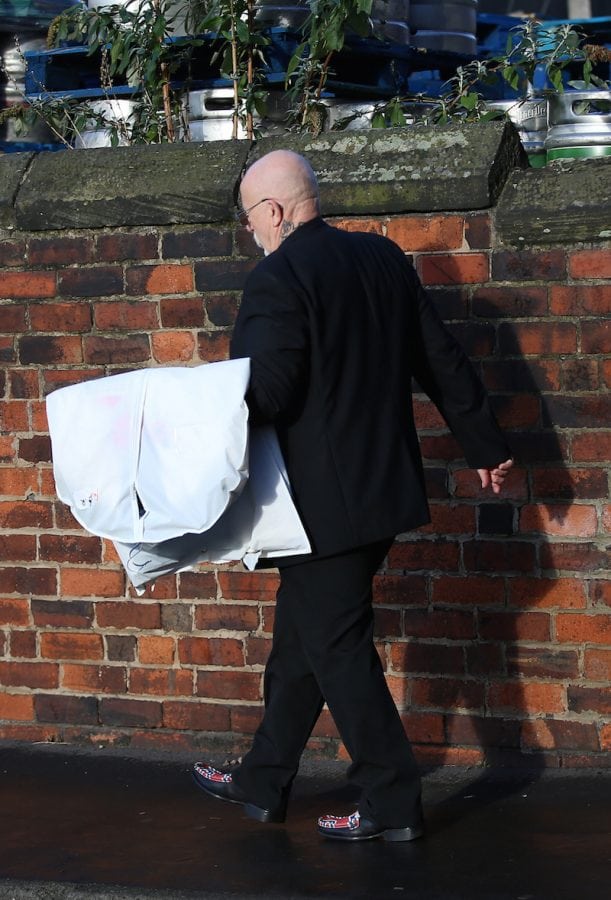 Clothes believed to be destined for the wedding of Charles Bronson arrive at Wakefield Prison. 14 November 2017. Bronson is to marry former Emmerdale star Paula Williamson. Bronson – who is now known as Charles Salvador – is due to get married to fiancee Paula Williamson in an intimate ceremony at HMP Wakefield.

Preparations for the ‘wedding of the year’ involving Britain’s most violent prisoner Charles Bronson were today (Tues) underway.

A suit believed to be the one hardman Bronson, 64, will wear when he ties the knot to soap star fiancee Paula Williamson was hand-delivered to HMP Wakefield at 10am in a white cotton bag.

A black Saab convertible car with the words ‘free Charles Bronson’ emblazoned on the side is stationed in a hotel car park where the bride is thought to be staying.

A second car, a silver-blue Mercedes, is also located in the hotel car park with the words ‘Just Married’ in individual letters strung to the rear of the vehicle with ribbons on the front.

Just five people will get to witness Bronson saying “I do” in a behind closed doors ceremony at the West Yorks prison which is understood to get underway at 2pm.

His fiance Miss Williamson, 37, has previously said Bronson is “excited” about the ceremony – especially as he gets to wear trousers with a zip for the first time in 25 years.

It will be the first time Bronson – who is now known as Charles Salvador – has not worn anything but a prison-issue tracksuit in over two decades.

The pair will exchange rings which reportedly have CPS engraved on them – standing for Charles and Paula Salvador, but sharing an acronym with the Crown Prosecution Service.

Prison hardman Bronson will reportedly be handcuffed to a warden for the ceremony before heading back to his cell – unable to consummate the marriage.

His bride, family and friends party are set to carry on the celebrations at the three-star York House Hotel – which is just a few minutes walk from the prison.

Rod Harrison said Bronson was “keeping calm” – but bemoaned the fact “some agreed arrangements” have been thrown out.

The prisoner will still be getting married, but it won’t quite be the perfect ceremony he had arranged with prison, Mr Harrison has claimed.

Bronson’s pal said the lag is taking it “in his stride” and still hoped it would be a “fantastic day” at the prison chapel.

Paula and Bronson got engaged on February 13 after they had been a couple for five months – describing their relationship as being “madly in love”.

Ex-Corrie actress Paula, who has starred in Corrie, Emmerdale and Hollyoaks, will head to Malta for their honeymoon without her new husband.

Bronson is one of Britain’s most notorious prisoners and has been in and out of jail since 1974.

He has spent 41 years behind bars, including 37 in solitary confinement, after a string of brutal attacks on prison guards.

Bronson was given a life sentence after taking prison art teacher Phil Danielson hostage at HMP Hull after he criticised one of his drawings in 1999.

The parole board is set to make a decision on Salvador’s future within the next two weeks.