A homeless man who rescued some DUCKS and raised them as his own has been left devastated – after they were removed from his care. Russ O’Conner says he saved the animals and raised them on the street. He kept them in a cardboard box but the conditions of the two ducklings fell foul of […] 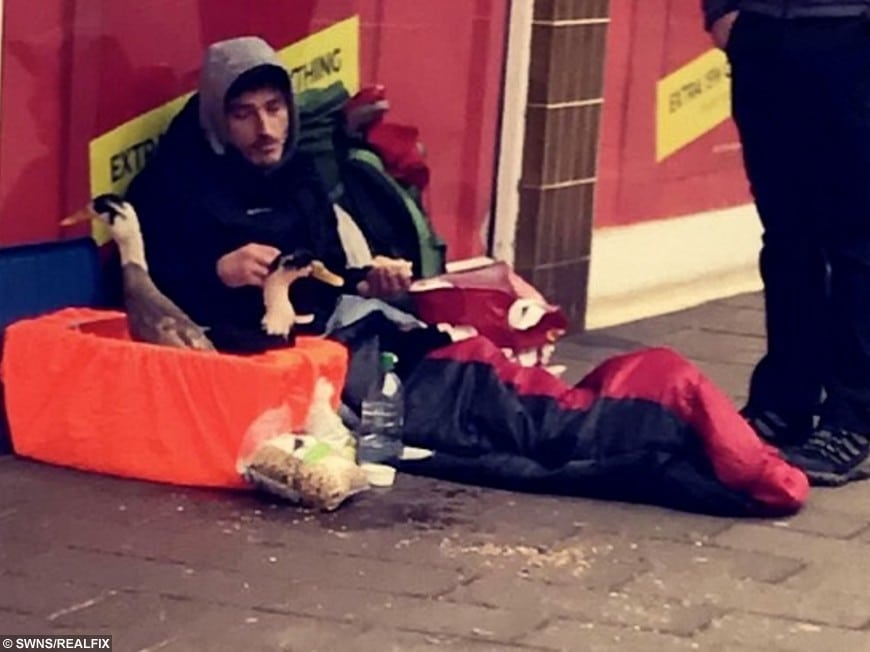 A homeless man who rescued some DUCKS and raised them as his own has been left devastated – after they were removed from his care.

Russ O’Conner says he saved the animals and raised them on the street.

He kept them in a cardboard box but the conditions of the two ducklings fell foul of the authorities and police have now taken them away.

The RSPCA said it took action following a number of calls from concerned members of the public concerned about their welfare.

But Russ, who lives on the streets in Newton Abbot, Devon, said he was distraught at the loss of his pets.

He added: “They played every rule in the book to take my ducks (away). “I wouldn’t sign my pets over to them so the police seized them from me.

“I gave up smoking weed to take care of my ducks, they did not like that people liked to visit my ducks each day.”

Witness Kymberley Pearl-Hatton said there was a heavy police presence when the ducks were seized – including a riot van.

She had previously spoken with Russ who told her how he saved the ducks and looked after them.

Writing to Facebook, she said: “Remember the homeless man I posted about, the one with the ducks he had rescued and raised? “Someone has called the police and RSPCA, there were nine officers, a riot van and two police cars – what the hell?

“Don’t they have some real work to do instead of harassing a guy down on his luck?”

The RSPCA said: “We received a number of calls regarding a homeless man who was keeping two ducks in a cardboard box in Newton Abbot, Devon.

“On Thursday, February 2 police seized the ducks and placed them into RSPCA care over concerns that their welfare needs were not being met.

“The ducks have been placed into boarding at a private establishment and there is now an investigation ongoing.”

Devon and Cornwall Police said: “Police were called to assist the RSPCA.

“Officers seized two ducks on behalf of the RSPCA