"I had to ask them to clean it, we covered it, hours later still no sign so we washed it." 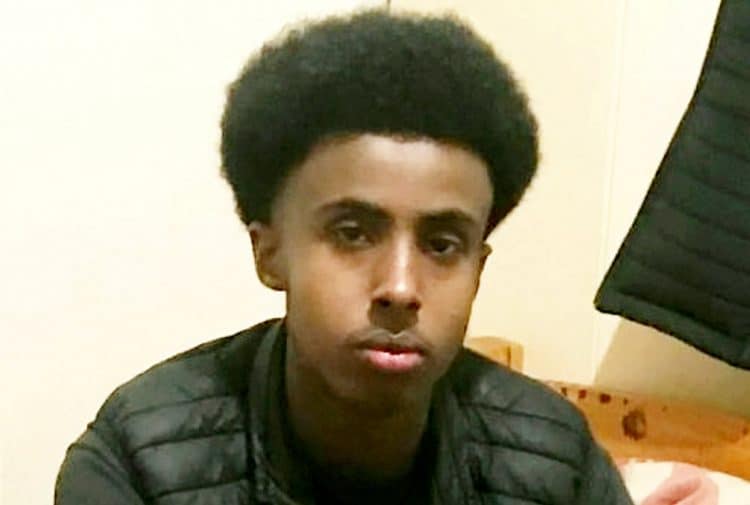 A police force has apologised and launched an “urgent enquiry” after grieving relatives of a killed teen were left to scrub bloodstained streets following his fatal stabbing.

Abdirahim Mohamed, 18, died in the early hours of Thursday morning (9 September) after being knifed in the street just before midnight.

Cops were called to Melbourne Street, Leicester, at 11.45pm on Wednesday night following a report of a serious assault.

Abdirahim was found with multiple stab wounds and rushed to hospital where he tragically died of his injuries.

Locals had arranged a vigil in the area at around 5pm on Thursday, but were shocked to find the street was still stained with blood after the knife attack.

It is claimed Abdirahim’s brothers were forced to help clean up the street, sparking anger among residents.

Shareefa Energy, a youth worker who attended the vigil, said people became “angry and upset” about the scene.

She tweeted: “Police left the blood of a Somali boy murdered in Highfields on the streets.

“I had to ask them to clean it, we covered it, hours later still no sign so we washed it.

“Why were the boys brothers and the community left to clean his blood off the streets?!”

The force issued an apology to Abdirahim’s family, who said they had been “overwhelmed by the events of the past few days”.

Leicestershire Police’s Assistant Chief Constable Julia Debenham said : “I want to apologise unreservedly to the family and friends of this young man, along with other members of the community involved in cleaning up blood from the road and pavement.

“This must have been extremely distressing. It is totally unacceptable that this mistake happened and I have asked for an urgent enquiry into the circumstances.

“The investigation into this terrible crime and bringing the offenders to justice is our top priority.

“We have a large team of dedicated specialist officers engaged in this investigation who are working tirelessly to that end.”

A force spokesman said a 58-year-old man has been arrested on suspicion of conspiracy to murder.

He remains in police custody where he is being quizzed by detectives.

In a statement issued by the police, Abdirahim’s family said: “We are overwhelmed by the events of the last few days and cannot believe Abdirahim is gone.

Police have appealed for witnesses to the incident.

Detective Chief Inspector Joe Banfield said: “We understand there were a number of people in the area around the time of the incident and are appealing to anyone who was in the area and who has any information to make contact.”

Anyone with any information is urged to call 101 quoting incident 680 of 8 September.

Related: Watch: Police apologise to family of mum – choked to death – after claiming she died in sex game