A lucky pilot has told of his miracle escape when he plummeted 2,300ft to earth after a wing on his microlight collapsed in mid-air. Eric Rhodes, 57, managed to radio his wife Denise, 65, as his aircraft was falling to tell her: “I love you lots, sweetheart. Goodbye, I’m going to die.” Incredibly, seconds before […] 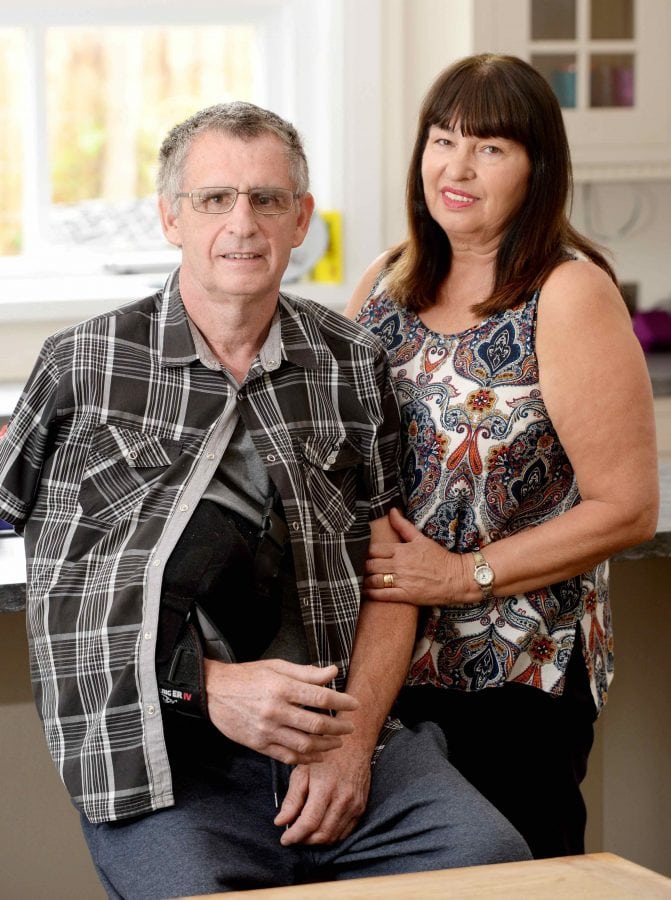 Microlight pilot Eric Rhodes whon had a lucky escape after crashing near Skegness in May - Pictured with his wife Denise. See NTI story NTIFALL. A Leicestershire microlight pilot whose aircraft plunged to earth from 2,300 feet when a wing collapsed has spoken of his escape. Eric Rhodes, 57, of Asfordby, near Melton, fell to earth within seconds of the catastrophic incident, suffering several fractured ribs and vertebrae, a punctured lung and wrenching his right shoulder from its socket. Eric was flying from Skegness to Boston Aero Club, in Lincolnshire, where he is a member, at 65mph at about 4.15pm on Sunday, May 28 when the drama unfolded. He said: "I'd only been in the air 10 minutes. There was a terrific bang and the aircraft shook. Something hit me under the arm and ripped my shoulder out. I was lying down across the aircraft looking at the ground. "I could see the steering mechanism dangling from underneath the aircraft and I could see the ground coming towards me at a terrific speed. "I managed to pull myself up, looked up and saw the wing had folded and I was spiralling down." In the handful of seconds Eric's aircraft plunged straight through a tiny gap in the canopy of a densely wooded copse in Wainfleet St Mary without hitting a single tree, missing deep lakes feet away on either side.

A lucky pilot has told of his miracle escape when he plummeted 2,300ft to earth after a wing on his microlight collapsed in mid-air.

Eric Rhodes, 57, managed to radio his wife Denise, 65, as his aircraft was falling to tell her: “I love you lots, sweetheart. Goodbye, I’m going to die.”

Incredibly, seconds before he hit the ground, Eric managed to manoeuvre the two-seater microlight to avoid two lakes and a cluster of trees to crash land in a field.

Fortunately, the father-of-six was just two miles away from the Nottinghamshire and Lincolnshire Air Ambulance, who were at a nearby fete and tended to him.

Staggeringly, a party guest of the farm Eric touched down on was a doctor, who rushed over to the scene in the farmer’s 4X4 to help him.

It is thought the crash happened when the wing folded in on itself due to either turbulence or a small hairline crack as Eric flew towards Boston, Lincs.

Eric escaped with several fractured ribs and vertebra, a punctured lung and an injured right shoulder which was wrenched from its socket.

Doctors at the major trauma unit at Queen’s Medical Centre, in Nottingham, expressed their amazement at the miracle survival following the crash at 4.15pm on May 28.

Eric, of Asfordby, Leics., said: “I took off from Skegness Airfield with a friend of me. My friend was flying at the side of me.

“I’d only been in the air ten minutes. There was a terrific bang and the aircraft shook.

“I just saw a huge flash.

“Something hit me under the arm and ripped my shoulder out.

“I was lying down across the aircraft looking at the ground.

“I could see the ground coming towards me at a terrific speed.

“Then I could see the steering mechanism dangling from underneath the aircraft with a wire dangling out of it.

“I tried to grab the wire, but I couldn’t get to it because of my shoulder.

“I looked up and saw one of the wings had folded – one was at about three o’clock, and the other was at 12 o’clock.

“If you looked at the aircraft front on, it would have looked like an ‘L’ shape.

“I was spiralling so fast that it made me dizzy.

“I was just waiting for the big bang on the ground.

“I was spiralling out of control like a sycamore seed. I didn’t think there would be anything left of me.

“I spoke to my wife while I was coming down. I said ‘I love you lots, sweetheart. Goodbye. I’m going to die.’

“I wasn’t worried about dying, I just held on to the aircraft, and thought how lucky it was that my wife wasn’t with me.

“I was concerned about the people I was leaving behind, particularly my wife.”

The grandfather-of-eight was flying from Skegness, Lincs., to Boston Aero Club, where he is a member, when the horror crash took place.

His friend, Phil Brooks, was flying alongside him in a separate plane and immediately put in a Mayday alert to trigger the emergency services when Eric fell.

He stayed airborne as an aerial marker to guide the rescue helicopters.

Amazingly, Denis, who works in the tearoom at Boston Airfield, had been due to fly with her husband, but was unable to because she was dog sitting.

“He watched me go down and hit the ground.

“The emergency services were alerted very quickly because of Phil flying above where I crash-landed.

“The farm that I landed on, they were having a family do and one of the people there was a doctor.

“He was able to take me in a 4X4 to the air ambulance.

“The doctors at Queen’s Medical Centre where I was airlifted to were expecting a corpse.

“They couldn’t believe I was alive, I heard one of the doctor’s saying that.

“When I got there, they were telling me that I had to get my lungs back working, and I can’t remember much after that.

“The doctor that treated me came to see me the next morning and whispered in my ear that I when I felt up to it, I should buy a lottery ticket.

“He was so amazed.

“I ended up with a load of broken ribs, a punctured lung, several cracks in my spine and my shoulder out, but I’ve been told they will all heal.

“I want to thank everyone who was involved in the rescue operation and who looked after me in hospital.

“It’s been investigated and they think it was turbulence or a hairline crack that couldn’t be seen by the naked eye.”

Denise said: “The chief flying instructor told me Eric had gone down.

“The next thing, all went quiet.

“Then the police phoned and asked me what frame of mind Eric was in.

“That’s when it hit me. They said they were doing everything they could to find him.”

After an agonising wait 45-minute wait, she received a call telling her that her husband had been found alive.

She added: “I just said ‘thank Heaven for that’ Where he fell, there was a lake six feet to one side and ten feet to the other.

“He would have drowned. I just can’t believe how lucky he was, it’s just a miracle.

“When we were waiting at the hospital a doctor came out, shook his head and smiled and said ‘he’s got a few broken bones, but they’re all repairable.

“We all just burst into tears.”