74-year-old Shyam Lal Yadav, a farmer from Rahli village in Madhya Pradesh, India, underwent surgery to have the five-year-old growth chopped off his head 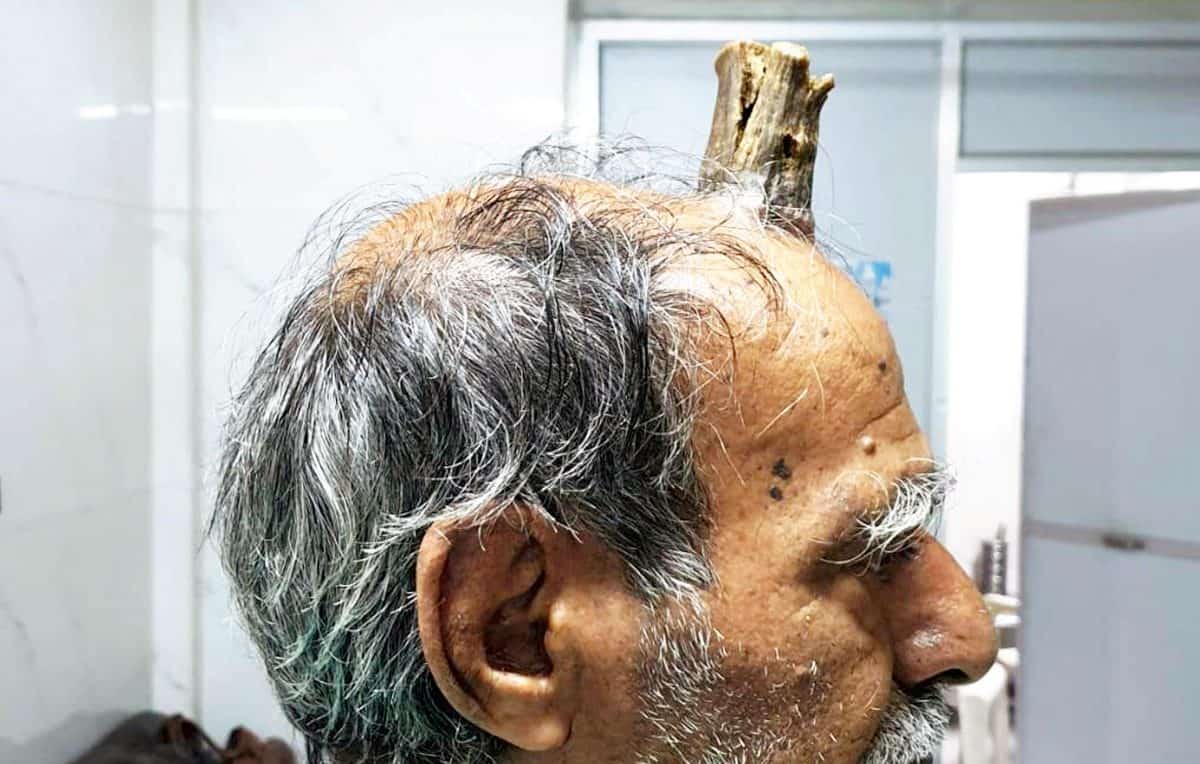 A man was forced to have a four inch HORN removed from the top of his head – after it sprouted from his scalp.

Shyam Lal Yadav, 74, said the unicorn-like horn started growing around five years ago, after he bumped his head, and was initially kept under control by his barber.

But the farmer said it soon became hard and got so long he had to seek help from surgeons.

The growth – called a sebaceous horn – is understood to be made of keratin, found in toenails and human hair.

Neurosurgeons at Bhagyoday Tirth Hospital in Sagar city, India, removed the lump – sometimes called a ‘devil horn’ and he is now recovering.

Surgeon Dr Vishal Gajbhiye said: “Around five years ago the patient had hurt his head after which a lump started growing.

“Initially, he ignored it as it did not cause any discomfort. Also, he got the growth cut by the local barber.

“But, when the lump hardened and started growing further, he approached the hospital at Sagar.

“As the horn is composed of keratin, the same material found in fingernails, the horn can usually be removed with a sterile razor.

“However, the underlying condition will still need to be treated.

“The sebaceous horns are predominantly benign lesions however the possibility of malignant potential should always be kept in mind.

“Treatments vary, but they can include surgery, radiation therapy, and chemotherapy.

“Immediately after its removal, skin was grafted on the wound which has now healed completely.”

Shyam, from Rahli village in Madhya Pradesh, India, said the lump had been growing in size since 2014.

The cause of horns is still unknown, but it is believed that exposure to radiation or sunlight can trigger the condition.

Photos showed it towering out the top of his head, before he got help.

Doctors initially performed a CT on Shyam to determine what treatment would be necessary.

Surgeons used a razor to remove the horn and will need to treat the root cause of the growth to prevent it from returning in the future.

Shyam spent ten days in hospital recovering from the surgery and a biopsy of the growth confirmed it as harmless.

Details of the case have been sent to he International Journal of Surgery because of how rare this type of growth is, doctors said.