Carl Marshall, 89, left his home in Glossop, Derbys., last year ago over fears it was bad for his health 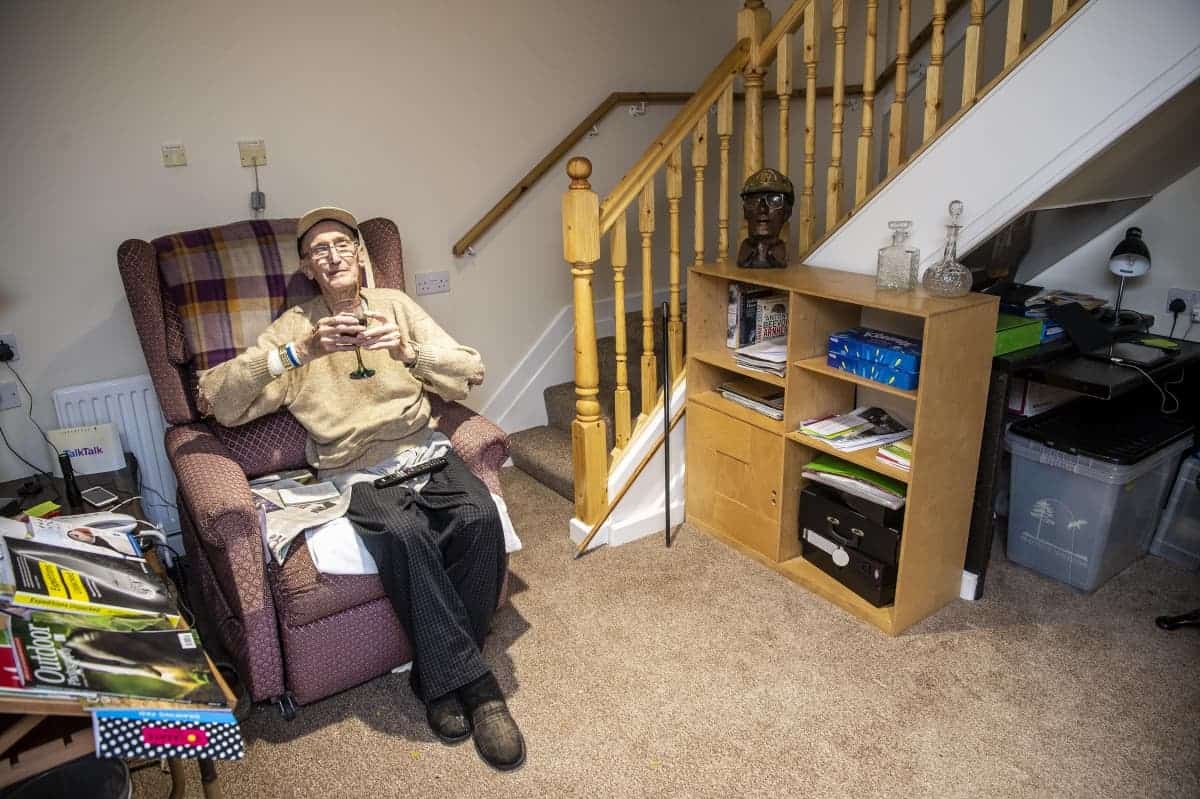 A pensioner has thanked pub regulars from his local boozer who clubbed together to give his home an incredible makeover after they learned he was living in squalor.

Former soldier Carl Marshall, 89, left his home over a year ago after his damp, mice-infested property began affecting his health.

He had lived in a shed next to his family’s former home without any heating, no downstairs window, or a bath and shower.

The Ex-Coldstream Guard, who has no surviving family, never told friends about the poor living conditions at his home in Glossop, Derbys.

But when he fell ill with pneumonia and was forced to move into a care home, regulars at his local pub found out just how desperate his living situation was.

So regulars at the Oakwood pub clubbed together to raise a total of £16,000 for a major refurbishment of his home in Dinting Vale.

Mr Marshall, a retired park ranger, said he was overwhelmed by the generosity of his local community who tirelessly worked to transform his home in just 10 months.

Mr Marshall, who has lived in the town for 78 years since 1941, said: “I was just blown away by the support. It brought a tear to my eye.

“I am very happy to be home. The place is so lovely and warm. All the people, all the businesses and people that rebuilt this home for me, I am so grateful.

“I’m glad to be back. I must say though staff at Whitfield House, which is a living facility, were very kind and gentle.

“I was there for 11 months. I was treated with nothing but kindness and patience.

“They were very good to me. The kept me warm because when I first got there I had pneumonia.

“They said that two more days and I would have had it. I’ve been back in the house for three weeks now. I have settled back in.

“I am still finding electric light switches and getting used to all the different things they’ve done for me.

“My bathroom and the shower in it is absolutely superb. It looks like a photograph you find in those posh magazines.

“I wish to say I did not ask anything of anyone. It all came voluntarily. I never said, ‘can I have this can I have that’, absolutely not.

“Whatever they did, they did because they cared and they wanted to do it.

“I have a great group of friends. It sounds corny, but I keep on saying thank you. But what else can you do?

“After all that work, to be able to stay here as long as possible is just great.”

Mr Marshall left to join the Army in 1952 and served in Cyprus and Egypt, but returned to Derbyshire to live with parents who died 28 years ago.

He sold the terraced property and moved into a two storey outhouse next door, formerly used as a cattery, which has been his home ever since.

In total around 50 volunteers from the local community worked for over 1,800 hours to complete the project just in time for his 90th birthday on November 16.

Mr Marshall, who never married or had children, added: I didn’t know the extent of the work that’s gone into it at the time.

“The new carpets, the showers, the lights, two new windows. You name it, they did it.

“It really is fantastic. It’s wonderful. I am very much happy to be back. I am so thankful.

“The state of the house sort of got on top of me a little bit. I kept thinking, ‘I must do this or I must do that,’ but the house was a good age.”

Mr Marshall catches a bus or takes a taxi to The Oakwood pub every day apart from Sundays where he enjoys a glass of red wine and a read of the newspapers.

Landlady Alison Swithenbank said: “His home was not fit to live in.

“It’s shocking but Carl is such a gent, he didn’t want to bother anyone so no-one knew.

“But when we saw it we had to do something.

“We embarked on it with a bit of naivety, I think that was required – if we had known it would never have got off the ground.

“But you can see it in his face, it has given him years of life back.”