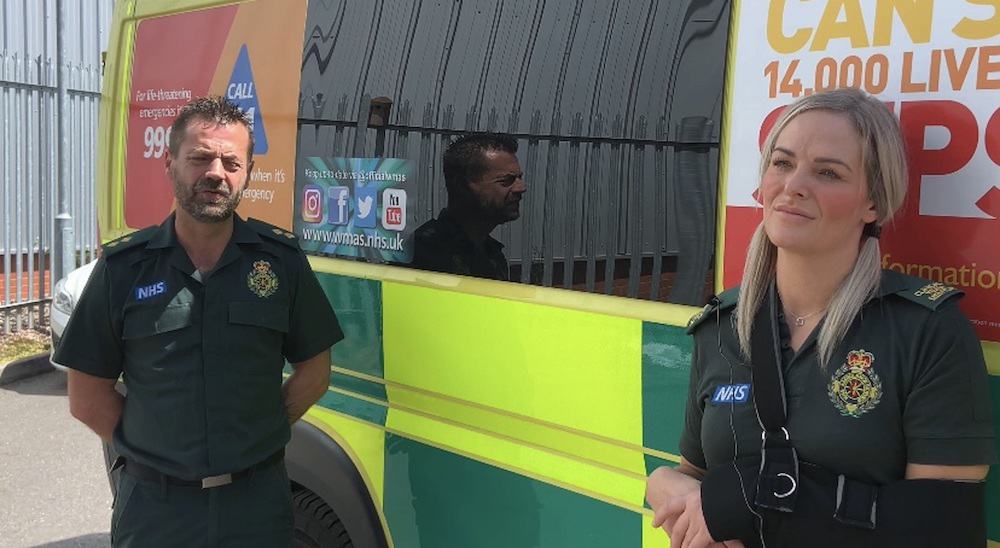 Paramedic crew-mates recovering after being stabbed on a 999 call-out have spoken of their shock at the attack and their desire to return to the jobs they love.

Deena Evans was stabbed once in the chest and fellow medic Michael Hipgrave was slashed across his back during an incident at a maisonette in Stephens Close, Wolverhampton, at about 12.20pm on July 6.

The experienced medics had been called to the property to carry out a concern-for-welfare check on the sole male occupant after the alarm was raised by a relative.

Mr Hipgrave was discharged from hospital later the same evening while Ms Evans had to spend another two days receiving treatment.

Speaking for the first time since the incident, both have told of their shock over what happened and of the lasting physical, mental and emotional scars.

In an interview released through West Midlands Ambulance Service, the pair said their families and children had “suffered” and the colleagues who treated them were “victims too”.

Ms Evans has been wearing a sling to support her left arm after suffering nerve damage in the attack, she said.

She said: “It’s affected some of the nerves in my arm and although I can use it, I can’t lift it fully.

“It feels like I’ve got a glove on – it feels really numb.”

She said her chest was still “really sore, really painful”.

Ms Evans, a clinical team mentor, added: “You close your eyes at night and relive the whole situation.

“You can’t get it out your head and it is getting over that stage, being able to put it to bed. At the minute, I don’t think I’m there.”

Senior paramedic Mr Hipgrave described how he was physically getting better but his emotional state was “changing hourly, daily”, adding “some days are better than others”.

He said: “It’s still quite a shock. I’m having good hours and bad hours at the moment.

“We’re getting a lot of support from colleagues and friends and family, and general members of the public we’ve never even met before sending us lots of good wishes.”

The pair also said they were extremely grateful after being inundated with messages of support.

“There’s not enough thank yous in the world to thank everybody,” said Ms Evans.

Recalling the incident and its impact on her colleagues, she added: “I think when it happened what was going through my mind was ‘how are they feeling?’

“It has been really upsetting, they’re our friends and colleagues, and it’s been quite difficult for us all.”

Mr Hipgrave, who had his stitches out this week, said: “We had quite an emotional meeting with the staff involved yesterday – lots of tears and talking and questions.

“Although we already knew how difficult it would be for them – being clinicians ourselves – being friends as well made it doubly bad.

“They’re victims too in a way because you never expect to go out to a colleague, especially in a situation like the one that occurred.”

Both are facing the road to recovery with a determination to get back on the job, they said.

Mr Hipgrave said: “Hopefully I will return to work as soon as possible, that’s my objective. The ambulance service is my life, it’s not a job to me.”

Ms Evans said: “I think it’s same for me, I love my job. I joined the service to do this job and as soon as I can I’d like to go back out on the road.

“I want to be back out there, helping people.”