The North East Ambulance Service said the violence unfolded over seven hours on Saturday night and into Sunday morning. 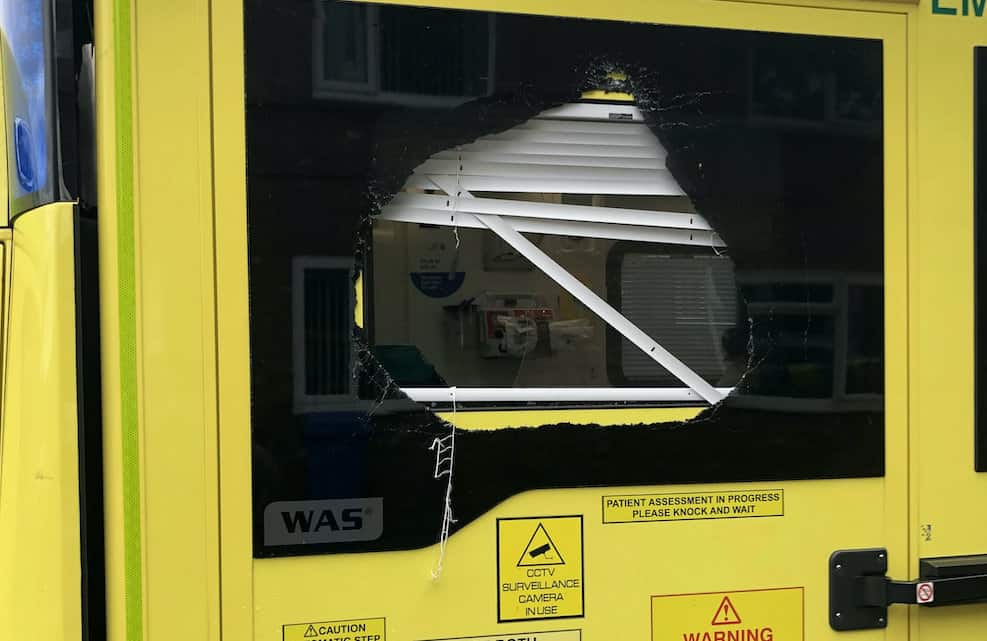 The North East Ambulance Service (NEAS) said the violence unfolded over seven hours on Saturday night and into Sunday morning, resulting in two vehicles needing thousands of pounds of repairs before they can be used in their life-saving role again.

Deputy chief executive Paul Liversidge condemned the violence that led to three people being arrested and one 999 worker being kept in hospital overnight.

He said: “These were appalling and despicable attacks against our staff who had responded to 999 calls for help; in one case because a man was considered to have an immediate threat to his life and needed urgent medical care.

Run in for help

“In this case, the patient became threatening and violent towards our staff and they were only protected by the good fortune of passing by a police station, where they were able to stop and run in for help.”

The attacks came a week after a paramedic was stabbed in the chest in the West Midlands.

Mr Liversidge added: “We are seeing an increasing and very worrying trend of violence towards ambulance crews and other healthcare professionals.”

NEAS crews have CCTV on board their vehicles and body-worn cameras are being introduced.

Mr Liversidge added: “The NHS and NEAS has been under an enormous amount of pressure and strain dealing with coronavirus for the last four months.

“Our crews and staff are tired and I am concerned for the longer-term implications of this pandemic on their mental health.

“For our staff to have been put under such an enormous pressure on Saturday night because of an increase in drink and drug-related calls has become a real concern.

“We are still dealing with a coronavirus pandemic, which the sensible majority is helping the NHS to tackle.

“But the acts of a foolish minority have now spilled over to violence and these people need to be swiftly and appropriately dealt with so that they do not put any others of my staff in any danger.”

In the first incident in Blyth, Northumberland, a crew who were treating a suspected overdose were attacked by another man.

The crew of three locked themselves in the vehicle and continued to treat the patient while the attacker allegedly threw bricks at the ambulance and smashed a window.

Then a crew in South Shields, South Tyneside, was attacked while treating an unconscious patient on the pavement.

As he revived, he became verbally aggressive and threatening, and on the way to hospital, he became physically violent, damaged equipment in the back of the ambulance and was only restrained when the crew pulled into a police station to seek help, before finally continuing to hospital.

In the final incident, an advanced technician crew, employed by a private company working on behalf of NEAS, was called to a drunk patient in South Hetton, County Durham, around 1am on Sunday.

The patient allegedly kicked and punched the 999 worker before retreating from the house.

The employee later reported feeling unwell and was kept in hospital overnight to check for suspected internal injuries before he was discharged home.