Jonus Raye was born a girl but told his mom Stevi Coye, 38, he was male when he was in the second grade and asked to cut off his long hair 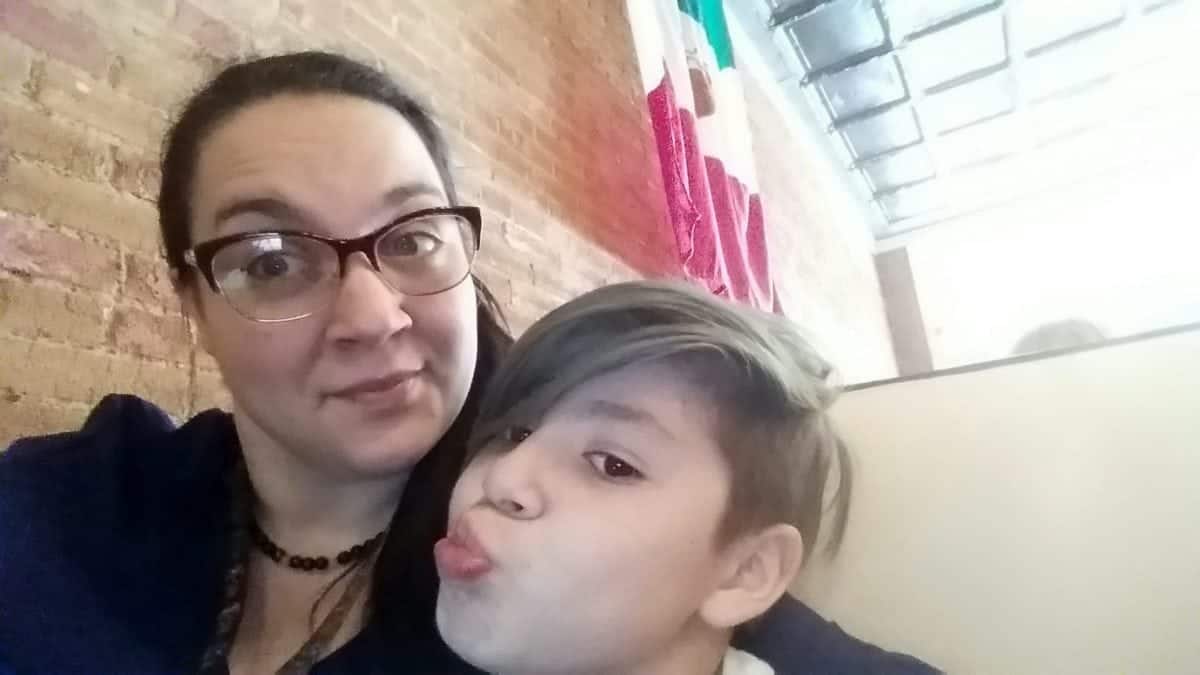 A nine-year-old pupil told by classmates that “God doesn’t make mistakes” after coming out as transgender has defied the bullies to return to school – as a boy.

Jonus ‘Raye’ Maydon was born Layla and raised a girl, but told his mother Stevi Maydon he ‘was male’ in mid-2016, when he was just seven.

Marketing executive Stevi, 38, dismissed the comments at first, concluding that Layla was confused or might simply be a tomboy.

She let him chop off his hair last September, but became concerned when he suffered long periods of low mood and frequently missed school because he was unwell.

But the troubled youngster “broke down” in tears after a day at school in February and confessed he felt “sick” when he was made to use the girls’ bathroom. Stevi then made the daunting decision to let her child transition and enrolled him in therapy, started using male pronouns and stopped calling him ‘Layla’ – in favour of his middle name, Raye.

The journey so far has resulted in a “complete 180” in Raye’s health and mood, but open-minded Stevi said it has left her family in conservative Texas, USA, divided.

Meanwhile, she said some religious colleagues have told her that being transgender is “not right” and others have blamed her for her child’s gender dysphoria.

Despite the criticism and cruel jibes from some children at school, Stevi said the community and school system have been largely accepting of her son.

Last month, Raye started in the fourth grade at a new middle school, where he is registered as a boy and teachers are treating him like his male classmates.

Mother-of-one Stevi, of Dallas, Texas, said: “Raye was always interesting. Growing up she had girl toys and boy toys and she played with them both equally.

“She would wear her Buzz Lightyear costume and her Woody Toy Story costume with a tutu over it.

“It wasn’t really anything I thought about until pre-school and she was acting out a little bit. I thought it was for attention at first.

“She was always having stomach issues and I thought it was an allergy.

“In the beginning of second grade he said, ‘Mom, I feel like, I feel like I… I have a boy brain and a girl’s body.’ I kind of froze. All these thoughts ran through my head.

“As open-minded as I am, I still didn’t want to go through with that and I thought it could be altered. I thought, ‘You are just androgynous.’

“I was trying to comfort him. Then he said, ‘OK, well, there is something else I need to tell you. I’m gay.’ So I started laughing.

“It was such a grown up thing and I didn’t really know if he knew what he meant.”

Stevi, who considers herself androgynous, wondered whether Raye – who aspires to be an architect or a mechanic – could be a tomboy or was going through a phase.

But by third grade, Raye had discovered the definition of transgender online and identified that way himself. Then, one night, he ‘broke down”.

“And that’s when it hit me. I realized I couldn’t let my son live like that anymore. I said, ‘Let’s do it.’ “As soon as I let him transition, this boy came out who was very sporty. It was like I had a different child; a complete 180.”

Stevi, who is separated from Raye’s birth dad, spoke to her son’s school principal in February and after that he was allowed to begin using a mixed gender bathroom.

Last month, Raye got a fresh start after starting a new middle school, where he is listed on the register as male.

While the school system has been supportive, some children in his class have made hurtful comments and Stevi has faced criticism from colleagues at work.

Raye said: “When people would refer to me as a girl it was like, ‘Oh, I feel like I’m a boy. Why are they calling me this?’

“I didn’t like painting my nails or wearing dresses.

“I feel a lot more happy now and I’m not sick as much, but I have lost some friends from my decision.

“It’s very sad but it just teaches me that they’re not real friends and they weren’t friends to begin with.”

Stevi, who is married to Joshua, 38, a designer, added: “The boys at school thought he was weird and didn’t have much to do with him, but the girls were more accepting.

“Every now and then he gets comments like, ‘My mom says that God doesn’t make mistakes and the Bible says you can’t be transgender.’

“I have had a hard time talking about it at work. When I first decided my son was going to come out, I spoke to a lady at work about it.

“She said she wanted to talk to me about it and took me into a room and went on about her Christian beliefs and how this isn’t right.

“A lot of the ridicule has been directed at me. The child makes a decision but people tend to question the parent. “The question I get most is, ‘How do you think this is right?’ But I have seen such a dramatic change in my child.

“There is a high risk of suicide in transgender and gay people, especially in the teen years, so if I have to shelter my child until he is old enough to fight his own battles then I will.”

In the future, Raye – who recently started gender therapy – plans to legally change his name from Layla Raye to Jonus Raye.

At age 11 he will have the option to start hormone blockers to prevent him going through female puberty and at 17 he can start taking male hormone testosterone. Stevi runs an Instagram blog as a resource for other parents of transgender children. Follow her @transparent_adventures.