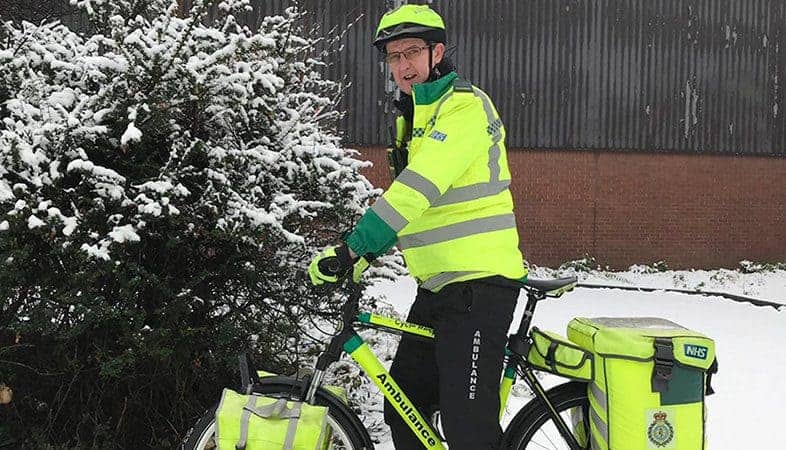 An NHS worker was savagely assaulted by a thug in an unprovoked attack just days before Christmas – while he attended to a patient.

Cyclist paramedic Ian Shortman was on his knees treating a patient when a man sprinted up towards him and booted him in the head.

He required hospital treatment including numerous brain scans due to dizziness and headaches, but fortunately is now recovering at home.

Police responded to the incident in Manchester city centre and an arrest was made just before 5pm on Saturday, December 21.

Ian, who has worked for the North West Ambulance service for 20 years, described the assault as ‘terrifying’, but thanked the Good Samaritans who intervened to help.

he said: “In 20 years’ service for NWAS and the people of Manchester, this is the most terrifying assault I’ve ever been subjected to.

“At the point of being kicked I was completely vulnerable and disoriented, if it hadn’t been for intervention of the good people out there, I dread to think about the outcome.

“However I refuse to allow one person to ruin a great career serving the people of Manchester, including the homeless, at this time of year when we are needed most.”

Head of Service, Pat McFadden said: “I am absolutely appalled at this abhorrent behaviour. Our staff who work so hard to care for other people when they are most in need should never be subject to such a vile and vicious attack but sadly it does happen all too often.

“Ian’s positive and courageous attitude is admirable and the trust is supporting him, as we do with all incidents of this type, but it should not be happening.

“I would like to send out a clear message that this kind of behaviour will not be tolerated and wherever possible, action will be taken against aggressors.”

In the year 2018/19, there were 385 incidents of physical assaults on North West Ambulance Service staff.