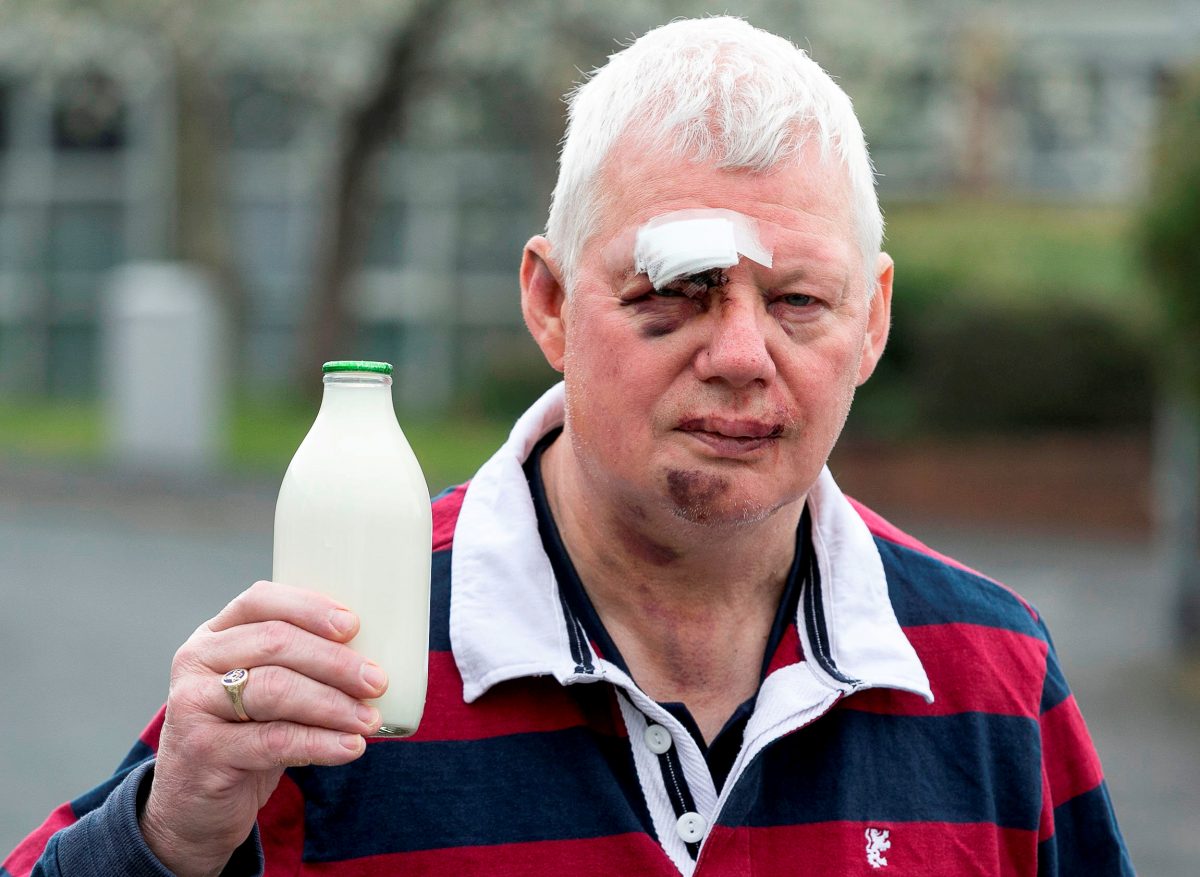 A poppy-selling milkman who has never missed a shift in 50 YEARS has been forced to retire – after a masked thief beat him up and stole his float.

Devastated John Kershaw, 65, should be celebrating half a century in the trade this year but has now quit after he was battered with a baseball bat.

He was pulled out of his van and attacked midway through his morning round on Easter Monday.

The granddad-of-four was rushed to hospital where he was treated for intense bruising to his face and body.

John had another van three months ago and has decided to cut short his fifty years delivering milk which he would have celebrated in August.

He and wife Jill, 64, decided to hand-write to his 200 customers explaining his retirement.

John, from Littleborough, Rochdale, said: “I had my van stolen three months ago in a different attack.

“I could have retired last year but I really wanted it to make it to 50 years in the trade.

“Making it to fifty was always my goal so it’s a shame I’ve not been able to make it.

“But I just thought to myself I can’t got on.”

Proud John was halfway through his shift on Monday morning when a masked-thug targeted the-dad-of-two and pulled him out of his float.

He was beaten for several minutes before the balaclava-clad thief drove off with the float.

He said: “I had just got in my car when this man in a balaclava just reached for the door.

“He pulled me out and dragged me across the floor.

“I decided to keep a baseball bat in the van after the last attack.

“I went in to get it but he grabbed it off me and started beating me with it.

“It was a good few minutes but it felt like forever.

“I had a bum bag on round my waist at the time had a spare set of keys in.

“He rifled through that before yelling: ‘Give me the keys, you’re old man I don’t want to have to kill you’.

“Then he got in the car and drove off.

“When I went to the hospital the doctors did a CT scan and all the works.

“As I was waiting for them to examine me I realised one of my teeth was very loose.

“I haven’t fractured anything but I came out of there very bruised and battered.

After speaking to wife Jill, 64, a retired NHS worker, he decided it was time to cut

He got self-employed plumber son John Henry Kershaw, 34, and daughter Helen, 40, to deliver the notes to his customers in and around Rochdale last night (Tues).

“It is with regret that I must retire from delivering your milk.

“It is a job that I have done nearly 50 years having taken over from my mum and dad.

“Unfortunately I have had my van stolen again and beaten quite badly trying to stop him stealing it.

“I am in talks with a friend of mine, who hopefully will take over the business.

“I would like to thank you for your support over the many years.

John left school in 1969 to join the family milking business, set up by dad Dennis Kershaw 1953.

For almost five decades the committed milkman has made 4am drives to the depot, delivering bottles of milk to the people of Rochdale.

“Both my mum and dad delivered milk so it’s something which has always been close to my heart.

“People do appreciate getting their milk delivered to the doorstep.

“I always tried to do it early as if you deliver it after 7:30am you’ll be hit by the traffic which isn’t helpful to people taking their kids to school and those going to work.

“I thought it was a nicer touch than for it to be typed out so I dictated to Jill what I wanted to say.

“I then signed it.

“She wrote it out four times on a piece of paper and we photocopied it fifty times.

“Jill then cut them up and I got my children to go round to all the customers I’ve served for years.

“It started as a family business and I suppose in a way it’s ended like that.

“I’ve got someone who I think will be a good fit to take over the business.”

Outraged neighbour Maria Burns posted on Facebook: “Just received this off my milkman for over 10 years, he has never missed a delivery in all that time, no matter the weather.

“He is having to give his round up because his van has been stolen again and he has been badly beaten up??

“He is a milkman ffs, he should be able to go about his business with no fear!!”

A GoFundMe page has been set up by horrified customers hoping to raise cash for the committed milkman.