Amy May Shead, 31, suffered anaphylactic shock when she took just one mouthful of a chicken and rice dish that contained nuts 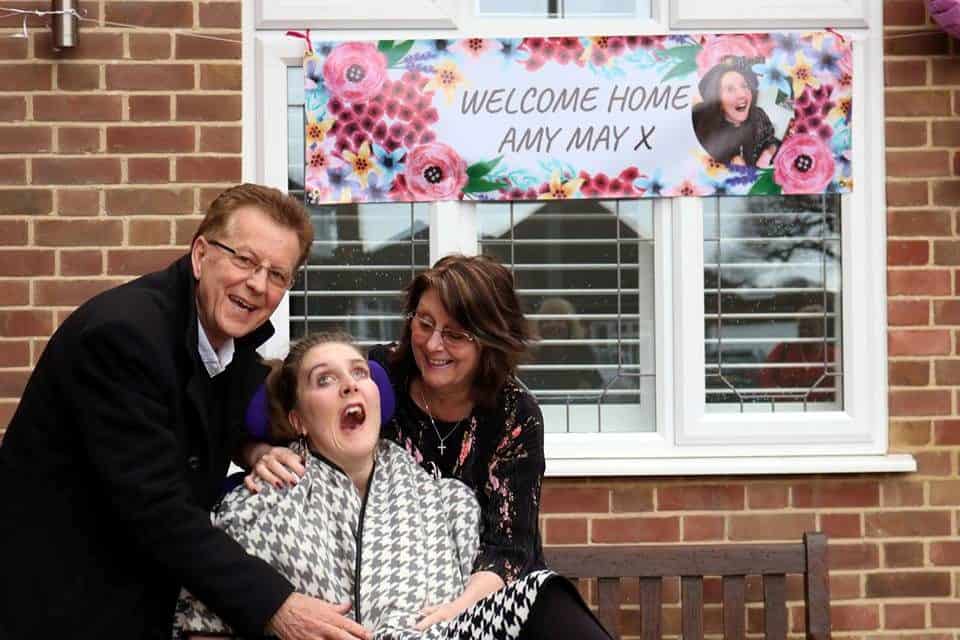 A former ITV producer who suffered a severe allergic reaction to nuts after taking a single bite of a chicken has finally returned home after five years in care.

High-flying This Morning producer Amy May Shead, 31, suffered anaphylactic shock when she took just one mouthful of a chicken and rice dish that contained nuts.

Amy was on holiday with friends in Budapest in 2014 when she experienced the fatal reaction which caused her to die for nearly six minutes.

Two doses of her EpiPen failed to contain the reaction and emergency services were called – but Amy had been starved of oxygen and was left in a coma with severe brain damage.

Because the reaction was so severe, Amy is now in a wheelchair, partially paralysed and unable to see or speak properly.

Amy has since needed around the clock care and has lived at the Marillac Care centre in Brentwood, Essex for the last three years.

Prior to this, Amy also spent a year at both St Thomas’ Hospital and the Putney Neurological unit.

But will now receive 24-hour care in a specially-adapted annex of her parents’ home in Westcliff-on-Sea, Essex.

Amy’s mother Sue Shead said it was “lovely to have her home”.

She said the family are still “devastated” about the reaction which nearly killed Amy, who was the most “vivacious, outgoing, bubbly young lady”.

Sue added: “Everyday is hard to get through. But we’d do anything for her.”

Sue said she had managed her nut allergy throughout school and university and and always carried medication and an allergy card with her.

And in Budapest she had produced an allergy card to staff at the restaurant three times and was assured the meal did not contain nuts.

Her reaction was immediate and resulted in a cardiac arrest.

Amy and her family have since set up a website, the Amy May Trust, which shares updates on her journey and campaigns for public awareness on the seriousness of nut allergies.

In an update about Amy returning home, the site reads: “Almost five years from when tragedy struck, Amy has now come home.

“Amy was given a wonderful send-off from the Marillac Care facility where she has lived for the past three years, to start a whole new chapter to live with her devoted parents, Sue and Roger.

“Amy has lived full time in three venues since 2014, St Thomas’ Hospital, Putney Neurological Hospital and Marillac Care, the staff from each treating Amy with great compassion, care and love and we thank the staff of all three of these facilities for their kindness – shown not only to her but also to her family and friends.

“However, as we all know, there is no place like home or the strength of family ties, and absolutely nothing which compares to the love of a parent.