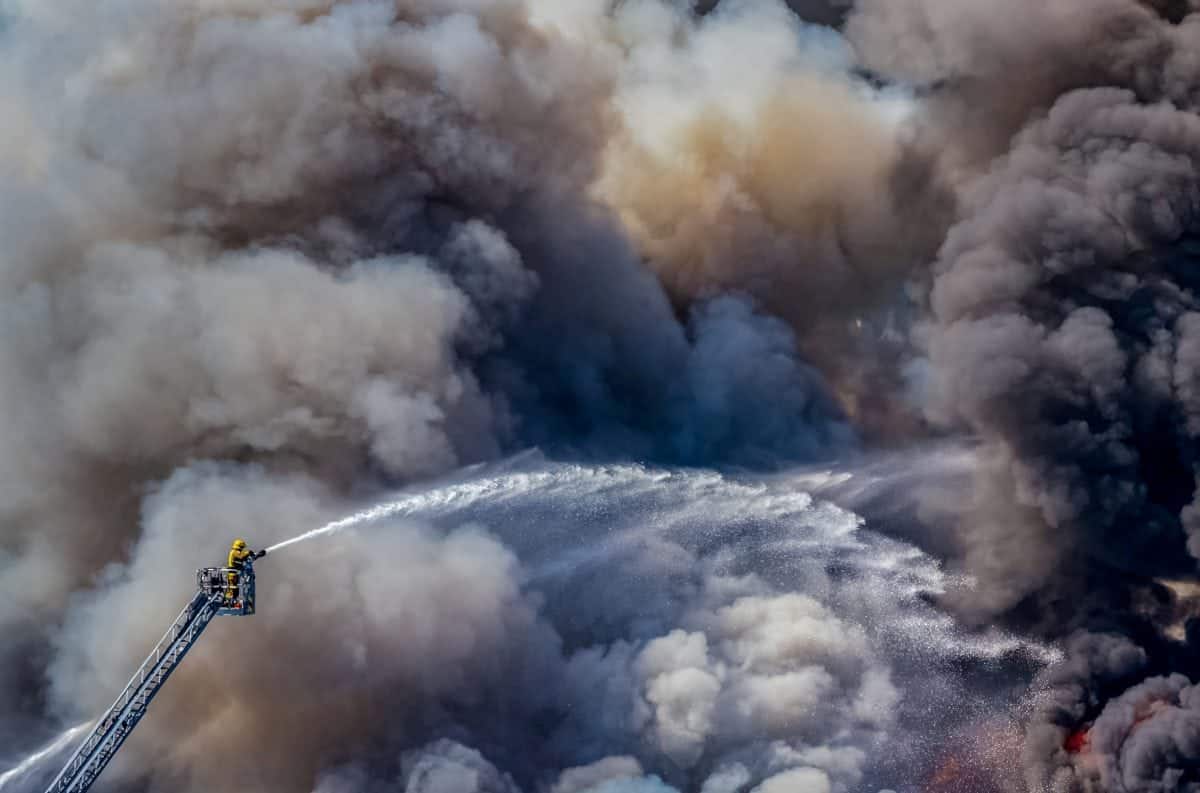 This incredible picture shows a lone fireman battling a massive blaze on a British channel island.

Emergency services were quick to respond when a fire broke out at a recycling centre.

Flames engulfed Guernsey Recycling in St Sampsons and a huge trail of smoke could be seen for miles around.

As the brave fireman sprang into action so did local photographer Martin Gray, 57, who fired off a few shots and captured this incredible picture.

Martin Gray, a carpenter, was working nearby at Bordeaux Harbour when the fire erupted.

He said: “It must have been around 10am. I had some camera gear in the van and decided to pop around and see what was happening.

“As I approached Vale Castle, I thought that might make a good vantage point and so parked up and ran up the hill, puffing like an old man.

“There were three or four other people up there so I went onto the ramparts.

“In my mind I thought it might make a good Eisteddfod competition entry – I didn’t realise at that point just how severe the fire was.”

Having taken a few pictures, he then noticed a standout photographic opportunity. “I thought I might get the plumes of smoke with the harbour cranes in the foreground.

“After taking a couple of shots I noticed the firefighter on his ladder coming out of the left-hand corner of my composition.

“With the flames in the right-hand corner and the smoke above, it all just came together.

“After a few more shots I realised that that was ‘the picture’ and there was nothing else to be had.

“I made my way home and quickly processed the image and sent a copy to the Press and also put it on social media.

“The rest is history.

“This kind of shot doesn’t come along too often, thank goodness.

“Not every composition plan comes to fruition but this one worked well and it’s going to be hard to beat.”

The recycling centre burned for two hours after the fire broke out on Friday, August 3, and 20 firefighters were at the scene.

A plume of smoke could be seen more than 20 miles away in Jersey, as scrap cars, plastic and metals went up in smoke.

A fire service spokesman said: “Because of the type of materials stored here the fire took hold very quickly.”