This is the heartwarming moment a homeless man broke down in tears when a Good Samaritan gave him his £120 trainers after seeing him walking barefoot in the street. Craig Wells, 36, was in a restaurant with his wife and three children when he spotted a homeless man wander past the window. Sales manager Craig […] 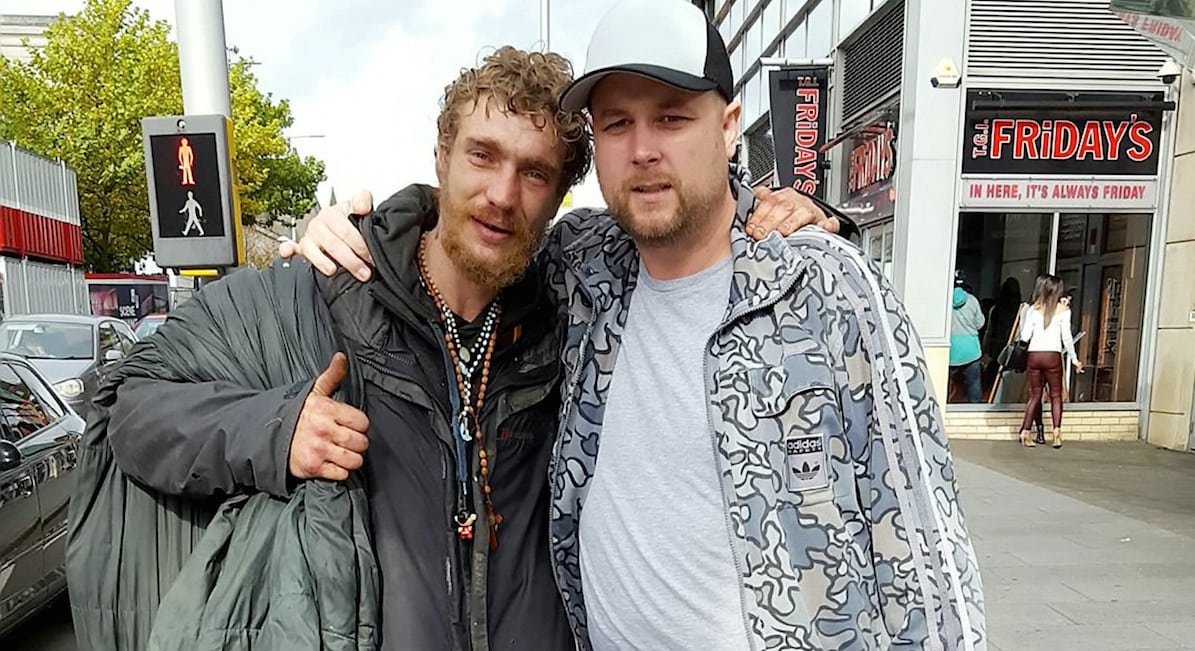 This is the heartwarming moment a homeless man broke down in tears when a Good Samaritan gave him his £120 trainers after seeing him walking barefoot in the street.

Craig Wells, 36, was in a restaurant with his wife and three children when he spotted a homeless man wander past the window.

Sales manager Craig noticed the man wasn’t wearing any shoes and his socks were threadbare so he dashed outside to speak to him.

In an incredibly kind gesture, he asked what size shoe the man took and after discovering he was also a size nine, gave him his brand new Nike Air Max trainers.

Pictures of Craig and the man, called Mark, embracing each other in Nottingham city centre on October 14, have gone viral with more than 500,000 people viewing and sharing it across the world.

Craig, from Chesterfield, Derbys., said: “I have been bowled over by the response.

“For me it was an impulsive decision. I was having a meal with my family and this guy walked past the window.

“He didn’t have any shoes on and his toes were poking out his socks. It was awful to see.

“I looked at my wife and just said ‘I’ll be back in a minute’. I walked outside and stopped him.

“I asked him what size foot he was and he said ‘nine why?’ I told him I was the same size and took my trainers off and gave them to him.

“He couldn’t quite believe it but he burst into tears and said ‘thank you’. A few people in the restaurant saw what had happened and came out and took pictures of us.

“We both got quite emotional. I said I wished him well and we went our separate ways.

“When I got home I saw some pictures on Facebook of what happened so decided to explain why I did it.

“He needed shoes much more than me. It was that simple.”

Craig is now hoping to start an internet craze of random acts of kindness.

Writing on Facebook, Craig said: “I was in Wagamamas having a nice meal with the family when I was drawn to Mark walking along the street without any shoes on and his toes hanging out of his socks.

“Immediately i ran outside to catch him. He mentioned how he didnt have any shoes and that he would love a pair. I asked what size he was and he was exactly the same size as me (coincidence..I think not).

“So i took my shoes (my favourite trainers) off and gave them to him. He then started to cry and gave me the biggest hug saying how nobody has ever been so kind.

“There is nothing worse than self praise and I certainly don’t want it. What I do want is people to recognise that Love is the greatest gift we have been given. It was given to us freely and freely we should give it away.

“So my challenge to you is this.. How have you loved on someone Today?? Love is the best gift we can wish for so PASS IT ON !!”