Barry Haywood, 59, planted the Asian Musa Basjoo trees ten years ago but this summer is the first time they have produced fruit 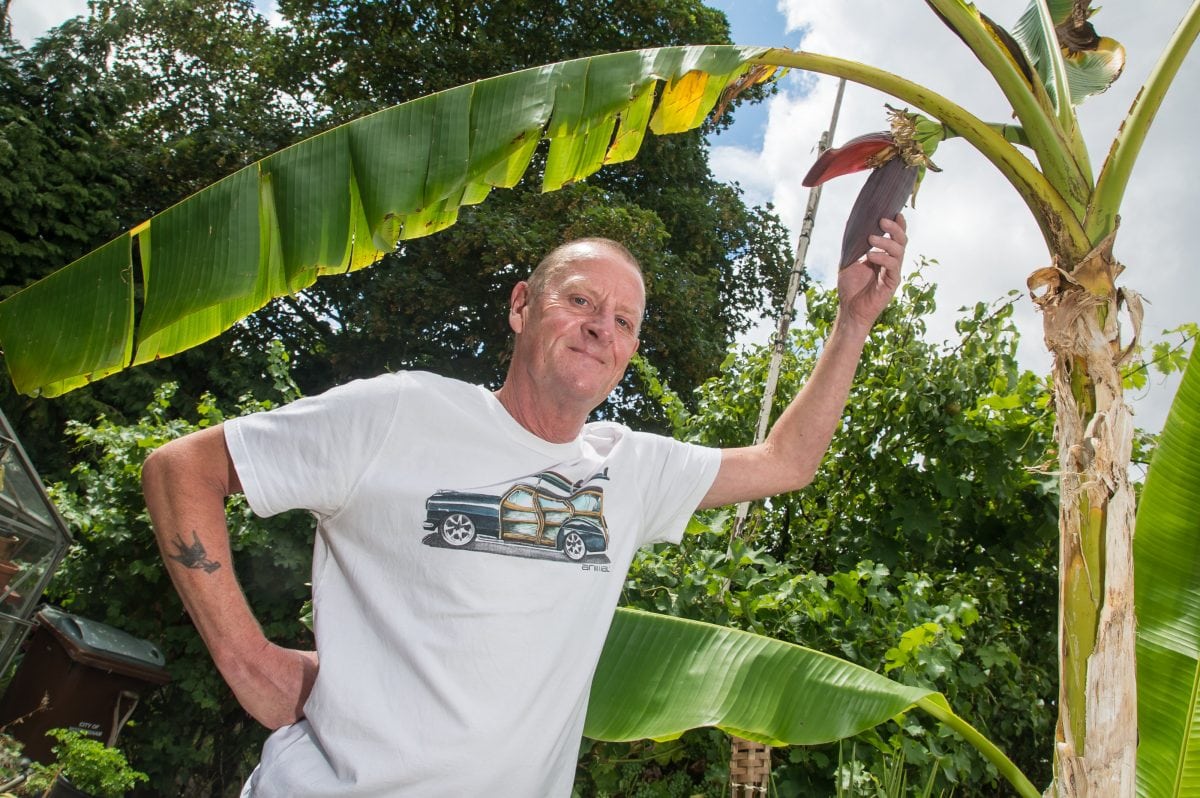 A green-fingered granddad was stunned when BANANAS grew in his garden thanks to the heatwave.

The tree has never produced fruit until the heatwave sweeping Britain caused it to bear bananas for the first time.

It now stands 15ft tall in Barry’s back garden in Clifton, Nottingham.

Magazine seller Barry said: “I grew the plant from seed off the internet about ten years ago “I have a big garden with what is basically its own micro-climate, it fully faces south which catches the sun and has high hedges so the plants are protected against the wind.

“I bought the banana plants for ornamental foliage but I think with all the hot weather must have caused it to fruit.

“They are not yet ripe so we have not tried them and I think it will take another two months of weather like this to get them ready to eat but I don’t know if we’ll get it.

“I’ve always been a keen gardener and doing something like this is an achievement, who else can grow bananas in their garden?

“I know there are other people that have banana plants but they haven’t yet got them to fruit.

“I think that there are a few people who have the pass it on for growing these sorts of plants but they don’t need any sort of special measures, I’ve just been watering them. “There is no secret to it I think all you can do is hope you get the right climate, that is what has happened this year.

“I’ve always been a keen gardener, I’ve been here 35 years and that’s how long it taken me to get the garden to where it is now.”

Barry, who has two grown-up children and two grandchildren, now plans to plant more banana trees in the hope of them producing more fruit in future years.

Wife Theresa, 62, a care worker, added: “It’s something that’s very unusual, at one time – he seems to be the only one that managed to them.

“We thought we might have grown bananas in the past, a few years ago when the fruit started appearing on a plant but it did not survive the winter. “We also do a bit of gardening for older people in the community although I much prefer going to car boot sales.”

Bananas need a sunny growing period of between nine and 15 months, with temperatures above 15C (60F), to fruit.

According to the Royal Horticultural Society, the optimum temperature for growth is 27C (81F).