These striking pictures show the hero lifeboat crews that helped save hundreds of lives of wounded soldiers during World War One. A national exhibition recounts the stories of the young volunteers who risked their lives in ferocious sea storms to rescue sinking naval ships. They include the daring rescue of 144 crewmen aboard a British […] 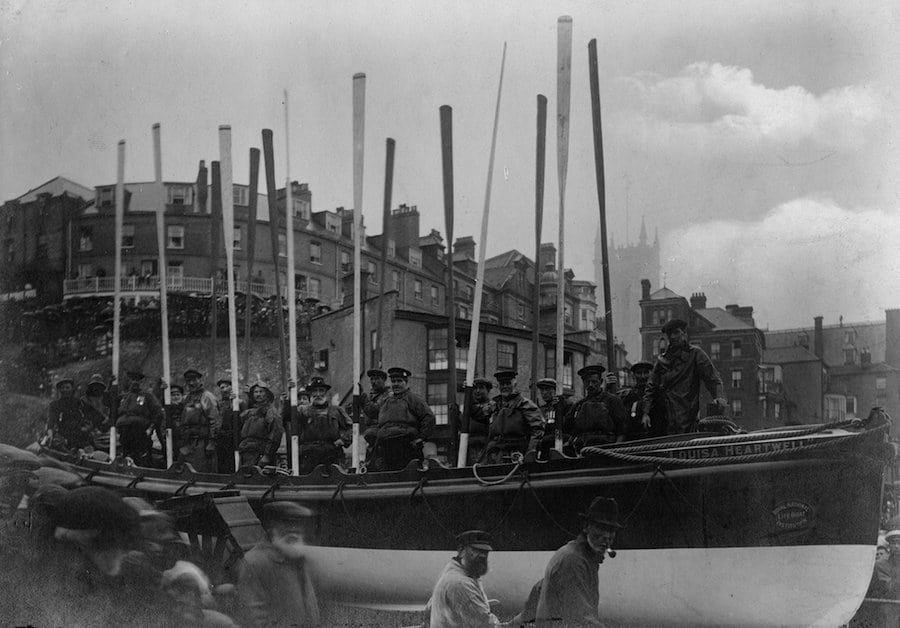 These striking pictures show the hero lifeboat crews that helped save hundreds of lives of wounded soldiers during World War One.

A national exhibition recounts the stories of the young volunteers who risked their lives in ferocious sea storms to rescue sinking naval ships.

They include the daring rescue of 144 crewmen aboard a British hospital ship that struck rocks off the coast of England as it headed to Dunkirk to rescue wounded soldiers.

The grainy photos and bravery medals awarded to inspirational coastguards are touring museums across the country to mark the centenary of the First World War.

The photos being shown at The Henry Blogg museum in Cromer show the six crews who saved the lives of 144 people after naval hospital ship ‘HMHS Rohilla’ hit rocks on a mission to evacuate wounded soldiers from Dunkirk, France, in 1914.

A spokesman for the RNLI said: “On the 30th October 1914 the HMHS Rohilla, travelling to Dunkirk to pick up the wounded, struck Whitby Rock.

“Although metres from shore, the high seas and storm force winds made any rescue difficult.

“Whitby’s RNLI lifeboat was carried by hand over a seawall to be launched from the beach.

“Eventually six lifeboats battled the sea to reach the ship, fill up with desperate passengers and return them to the shore.”

The exhibition also shows the story of the legendary double rescue led by boatman Henry Blogg whom the museum is named after in 1917.

Mr Blogg led 40 volunteers to help the Greek steam ship called the Pyrin hours before they were called out again to save the Fenebo Swedish ship after it struck a German mine.

He was awarded the charity’s Gold Medal – the lifeboat equivalent of a Victoria Cross – for his leadership with his Coxswain receiving a silver medal and 12 other crew received bronze awards.

It also shows three other historic rescues from RNLI crews across the UK whcih saw 57 people saved from the sea during the war.

Jacqui Palmer, the lifeboat charity’s Heritage Development Manager, said: “This exhibition highlights just a few of the many volunteers who saved others while the world was at war.

“Bravery and volunteering is central to the ethos of the RNLI and is as relevant today as it was during World War One.

“RNLI volunteers answer the call for help whenever it comes. Modern crews are fully equipped and trained thanks only to donations from a generous public.

“We hope that this exhibition will help to inspire current and future generations of supporters and lifesavers to enable the RNLI to continue to save lives at sea.”

The exhibition, which has visited 20 locations across the UK, will be on display at Cromerc until September 10 before continuing its tour until December 1918.

Each museum displays lifesaving stories from local community groups to create inspirational artwork that interprets their own local lifesaving story.