A shop celebrating the wizarding world of Harry Potter has taken opened on the street that inspired the series’ famous Diagon Alley. Diagon House has taken over from a brush shop that stood in the cobbled-stoned street for 101 years to sell memorabilia to Harry potter fans. Victoria Street in Edinburgh is thought to be […] 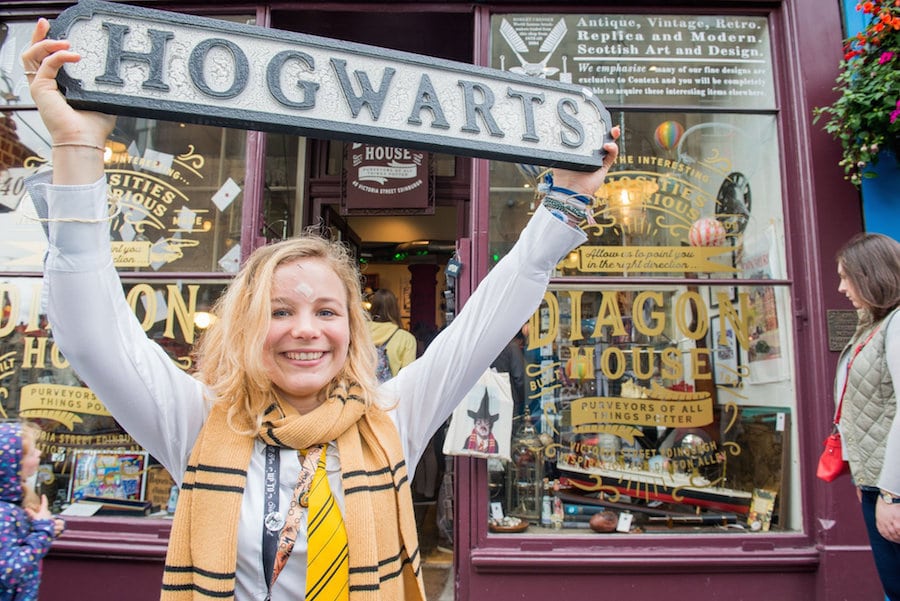 A shop celebrating the wizarding world of Harry Potter has taken opened on the street that inspired the series’ famous Diagon Alley.

Diagon House has taken over from a brush shop that stood in the cobbled-stoned street for 101 years to sell memorabilia to Harry potter fans.

Victoria Street in Edinburgh is thought to be JK Rowling’s inspiration for Diagon Alley — the wizarding alley and shopping area in the fantasy novel series.

Winding up two floors of stairs the shelves, walls and ceilings are packed with wands, signs, T-shirts and even replica Nimbus 2001 broomsticks.

Husband and wife team Andrew and Alice McRae have said that the building, which used to be Robert Cresser’s brush shop, has found its perfect use.

Andrew said: “The unique nature of this shop premises feels as if it was purpose built to offer the collection for Diagon House – celebrating the link with Diagon Alley.

“The brush shop was internationally famous. We like to think that when JK Rowling was writing the first books that Robert Cresser’s was trading and was so unique that it could bare some link to the shops on Diagon Alley and the broomsticks.

“This building feels like it’s found its perfect usage – you walk in and it feels like you’re walking into Ollivanders.

“We take what we do really seriously, we want people to be delighted by what we’re doing. This is JK Rowling’s home town and we want it to be absolutely top quality.

“It has such a spectacular feel to it that people really love to come in and enjoy the atmosphere that the building itself conveys – marry that with the world-class collection of officially licensed Harry Potter items in combination with our existing award-winning Museum Context collection and we hope it produces a lifestyle offer allowing fans to immerse themselves in the visual identity of the films.”

“The nature of the products we have are all functional, beautifully made items that you see as references throughout the films.

“And the response from customers is so overwhelmingly enthusiastic.

“Die-hard Potter fans are coming in and say they’ve discovered something new. ”

While it will be open throughout the Festival from 10am-10pm, Mr McRae insisted Diagon House was not “a pop-up” and was here to stay.