A doting dad is throwing a special early wedding so that his beloved terminally ill son gets the chance to be his best man. Lewis Jeynes, aged 13, suffers from a rare terminal disease and doctors didn’t expect him to live beyond the age of 12. But his loving family are determined that Lewis be […] 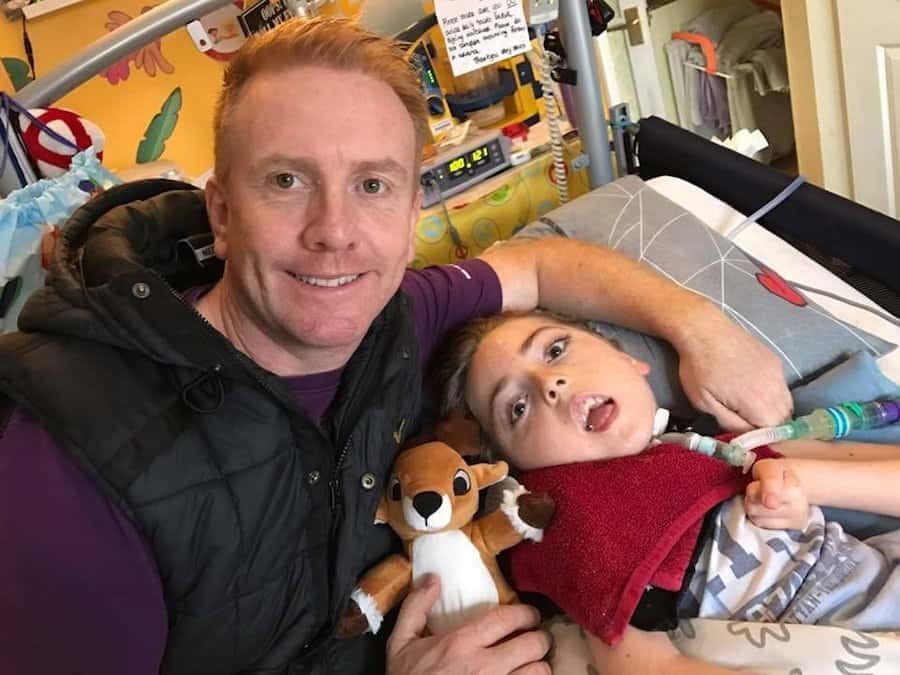 A doting dad is throwing a special early wedding so that his beloved terminally ill son gets the chance to be his best man.

Lewis Jeynes, aged 13, suffers from a rare terminal disease and doctors didn’t expect him to live beyond the age of 12.

But his loving family are determined that Lewis be the best man at a special ceremony in Lewis’ mum’s garden.

James Jeynes and ex wife Samantha Tolmie split in 2008, when their son Lewis, who suffers a rare variant of the terminal illness Batten Disease, was four.

The special wedding won’t be legally binding, with James set to tie the knot with fiance Emma Starkey next year in Portugal.

James said: “Because we’ve got an unpredictable outlook for his life expectancy we wanted to get married abroad.

“Lewis can’t travel so we wanted to make sure he had a chance to watch us get married.

“We really want to share the day with Lewis because the reality is he probably won’t be here next year.

“We didn’t want to risk waiting.”

But loving father James is focused on making Lewis the centre of attention on the day.

James said: “Even though it’s our wedding it’s definitely Lewis’ day. He’s going to be my best man and that’s what it’s all about.

“We love him so much. It’s not about his illness at all. We want him to be right at the heart of our wedding.

“My fiance’s six-year-old daughter Poppy is a bridesmaid and Lewis’s mum will make a speech from him, and he’ll help carry the rings.”

Lewis has reached thousands of people all over the world through his Facebook page which shows his day to day happiness.

James said: “He’s really popular on Facebook, I think he’s got just under 3,000 followers on his page from all over the world.

“I think he is quite an inspiration to a lot of people who look at him and see him so happy.

“But obviously they only see the happy side of things. They don’t see the horrible side.”

James was diagnosed with Batten disease aged two, and up until then he had developed normally.

His father described how he used to walk and talk, greeting everyone with a big ‘hiya’ while chasing the cat around the house.

Then one day he began limping. He lost the use of his legs, then his arms, then he couldn’t swallow.

James said: “Now he has a lot of machinery that comes with him so we really need to be within reach of a plug socket and so on.

“Lewis makes decisions with his eyes, but he can’t speak or make any sounds because of his tracheotomy.

“He has carers with him all the time.”

Lewis is on a ventilator and is prone to epilepsy and respiratory disease. He can no longer walk, move or speak.

The special wedding will be held in mother Samantha’s garden in Doncaster, South Yorks., on September 2.

James will legally tie the knot with fiance Emma Starkey in Portugal next year and thinks that his son’s condition cements their relationship.

“Emma’s fantastic with Lewis and she just understands. She’s even friendly with my ex wife and they have girly nights and so on,” said James.

“Because of this bigger issue that touches all of us everyone just gets on with it.

“That’s why my wedding will be in my ex wife’s garden.”

Mum Samantha said: “James and Emma really want Lewis to be there but he is not going to be able to be there next year – that is why they’re having wedding part one.

“He is too ill to be able to talk about it, but he adores everyone, and he will really enjoy this.

“You can’t help but love Lewis. He’s adorable. He is cheeky and has the most wonderful smile.

She added: “We’re so happy that we can do this for him.”

Lucky Numbers and Horoscopes for today 10 May 2022