A talented teenager has invented a brand new language with 1,500 unique words and a completely original script – at the age of 18. Multi-lingual Melissa May already speaks fluent German, French and Spanish and reads Portuguese, Norwegian, Italian, Swedish and Danish. She has dabbled in Latin and Old Norse, is learning Chinese and Dutch […] 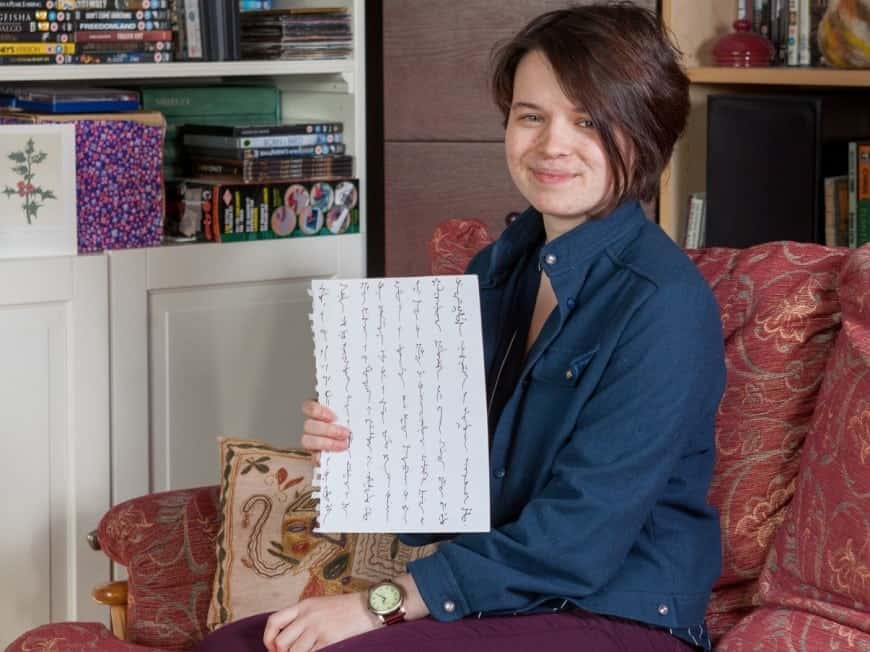 A talented teenager has invented a brand new language with 1,500 unique words and a completely original script – at the age of 18.

She has dabbled in Latin and Old Norse, is learning Chinese and Dutch and has applied to study Anglo-Saxon, Norse and Celtic at Cambridge University.

But not content with that the brainy student decided to invent her own language with its own words and script, written ‘backwards’ like Arabic.

Melissa has spent the past three years creating Skénavánns, which has a distinctive grammatical structure and a vocabulary of 1,500 original words.

She has already built up a 50-page dictionary which she is constantly adding to, detailing the definitions, related terms and roots of each word she invents. Melissa May, 18, who has invented a brand new language with 1,500 unique words and a completely original script.

But sadly she cannot hold a conversation with anyone in her new tongue – because she is the only person in the world who speaks it.

Skénavánns, which literally means ‘our speaking of the language’, sounds a little like a Nordic language but isn’t based on any other dialect.

Each root word was built around how Melissa thought that concept should sound, using a combination of letters she was “drawn” to.

And unlike Esperanto – the ‘universal’ language designed to be spoken around the world – she made Skénavánns slightly irregular on purpose – because it’s “art”.

Melissa, from Corsham, Wilts., said: “Most people don’t generally understand how it’s possible to create a language or why you would want to do it.

“I don’t have an aim, I’m doing it for the love of it. It’s an artistic venture and language creation is an art.

“I don’t want to dominate the world and make everyone speak my language, I do it because I can’t not.

“If you’re a writer you write and if you’re a painter you paint. This is what I do.” She added: “Skénavánns has really got nothing in common with other languages.

“It sounds like it has something in common with Nordic languages but the grammar is totally different.

“When I was trying to create words for things, a lot of it was about how something – a concept – sounds.

“I think you have to have a good imagination. I could have done it all as a linguistic process and thought about which consonants I was going to use.

“But I picked what sounds appealed to me from different languages. I really like long vowels, for example – it is very personal.”

Amazingly, Skénavánns is not the first language Melissa has invented. At the age of just 11 – inspired by J.R.R. Tolkein and films like Avatar – she created ‘Kalichiyaan’.

She said: “I write a lot and love creating my own roles and characters. Creating a language comes part and parcel with it.

“If you’re creating your own religion, people, magic and stories, why not a language?”

Melissa, who can read a book in minutes by processing a paragraph at a time, began learning French, German and Latin in her early teens at Hayesfield Girls’ School in Bath, Somerset.

She studied Spanish at A Level but found the classes too easy so dropped out and taught herself the two-year course in three months.

She began designing Skénavánns when she was 15 as part of her Extended Project Qualification (equivalent to half an A-level) – for which she got an A*.

She has since created three ‘drafts’ of her language, which is phonetic and has its own writing system but can also be written in the Latin alphabet.

Melissa eventually hopes to be able to write her own poems and stories in Skénavánns, as well as creating other sister languages.

The former student, who is considering humanitarian interpreting work as a career, said: “I am proud of it, but it’s also something which is extremely far from finished.

“It will continue to develop and morph in possibly unexpected ways in the coming years.

“It’s not finished and it probably never will be, but I have been working on this particular version for two years or so.

“I don’t spend as much time as I would like to because I’m quite busy – I also love writing, drawing and I do kung fu.

“But when I’m working on it I become completely immersed and spend hours on end doing it.”

She added: “My fascination with languages is something that forms a part of me so much so that most of my friends have accepted it a long time ago.

“Saying that, it’s only with the few people I’m most comfortable with that I let on just how deep the rabbit hole goes.

“Everybody’s different in their own way but purely in this respect, I have definitely felt alienated from a lot of people my own age.

“I can’t feign interest in what excites many other teenagers and they certainly can’t pretend to be excited about what interests me.”

Melissa has a younger brother, college student Jack, 16, and lives with her dad, Derek May, close to her mum, housekeeper Maree Whyte (dbl corr), 49, in Corsham, Wilts.

Mr May, a data handler and computer programmer who is currently off work due to long-term sickness, said he is “in awe” of his daughter.

He said: “She has been creating languages in one form or another since she could speak. It’s remarkable – it’s a faculty she has to the nth degree.

“She’s not very practical – if the TV doesn’t work because it hasn’t been plugged in it will take her ages to work that out, but her ability to process information is incredible.

“She can go to the toilet and take a book in with her and she will finish the book. She doesn’t read words by the words, it’s a paragraph at a time. She can skim down the page and onto the next page in the same time as I can read a sentence.

Nym i vólkyn sa ránaðin isirnen fallar, ka þænsjárir – formal greeting, literally ‘As the moon gazes upon the wandering stars, so I see you’

Elen – deep love and affection for all of humanity