by Ben Gelblum
in Good News, Health, Must Reads 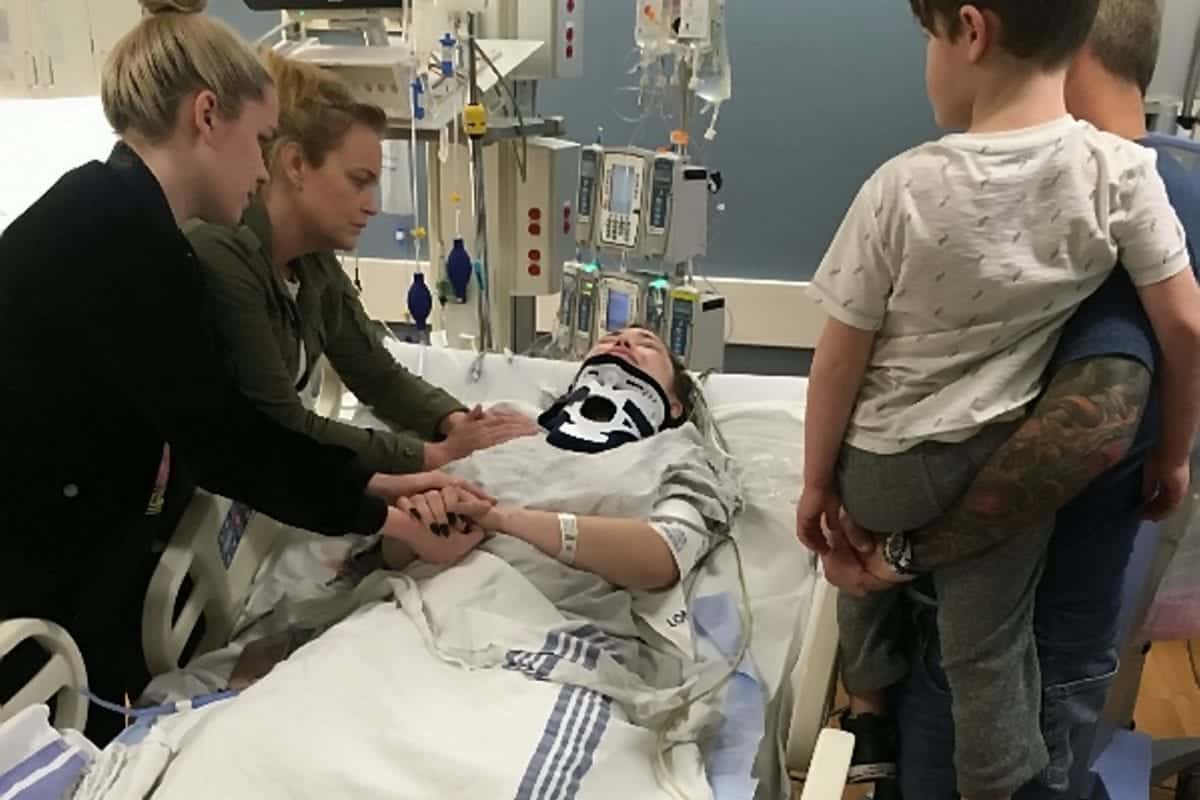 A young mum paralyzed in a car crash three weeks after her brother was killed on his motorbike can walk again thanks to an Iron Man-style robo-suit.

Monique Kelley, 28, was pinned to the ground by her SUV after it slid across black ice, flipped over and smashed into a tree.

The barbershop owner awoke to the sound of her six-year-old son Kamden’s voice on a rural road near Klamath Falls, Oregon, USA.

While Monique’s little boy – who had been asleep in the back seat – was uninjured in the crash, she had to be freed from the wreck by rescuers.

She suffered devastating injuries including a T7 spinal burst fracture which left her paralyzed below the chest as well as broken ribs, a punctured lung and concussion.

Ten months after the horror crash in January 2018, Monique remains in recovery.

Despite all odds, she has learned how to get into her wheelchair unaided and to stand up with support and is now learning to use a robotic ‘exoskeleton’.

She is taking part in a clinical trial at Stanford University where she will be given a high-tech ReWalk suit for one year.

The wearable device is strapped to the legs and provides the power necessary to take steps, which allows movement and helps strengthen the muscles.

Monique says every step she takes is in honor of her brother, denturist Kevin Mayo, 25, who died last December in an alleged road rage incident.

Raleigh Rodrigues, 65, is accused of causing the fatal crash when he swerved his pickup truck into Kevin’s motorbike. He is charged with manslaughter.

Brave Monique, of Bend, Oregon, US, said: “Using the exoskeleton for the first time was an extremely emotional experience.

“It was in fact the first time my legs had taken steps like that since the crash.

“When you become ‘a disabled person’, every part of your identity gets stripped away and then this is all you have left.

“For someone living with a spinal cord injury, the exoskeleton technology is the next best thing to being cured.

“There is certainly a learning curve involved, however once you get used to motions it starts to feel natural.

“The human body is meant to stand up and ambulate, but for someone with a spinal cord injury you spend most of your time sitting or laying down.

“The exoskeleton fixes that. I feel human again.”

“Everything I do is in honor of my brother,” she added.

“I push myself to the absolute limit and beyond because of him.

“I even bought myself some custom shoes in memory of him that I believe I will walk in someday and carry him with me in each step.

“He truly is my guardian angel.”

Monique’s ordeal began on January 8 when she was driving home from her brother’s house in Ashland, Oregon, to Bend, Oregon, shortly after his funeral.

Her son Kamden was fast asleep in the back seat when she hit a patch of black ice and the car careered out of control.

Monique said: “I remember waking up to my son’s voice. He was standing outside of the car completely unharmed.

“He crawled into the front seat and I could hear him with panic in his voice because he couldn’t find my phone.

“I told him to stay back from the vehicle and attempted to pull myself from the car.

“I realized in that moment that I was anchored to the vehicle by my sternum and I couldn’t push anything.

“I thought maybe I could pull my leg out and get unstuck. When I couldn’t find my right leg I turned to my left and found my foot conveniently located next to my head.

“It was completely lifeless.

“For some reason I didn’t panic. I just led back down where I was and started yelling for help.

“I must have blacked out because the next thing I knew there was someone’s hand gripping my shoulder.”

A passing driver found the wreck half an hour after the collision, Monique said, and she was rushed to a local hospital.

She was then transferred to Oregon Health & Science University Hospital in Portland where medics operated to stabilize her spine, which had almost been severed.

After one month in intensive care, Monique began rehab at the Rehabilitation Institute of Oregon.

Incredibly just six months after the collision, she managed to stand up with support for the first time after being inspired by a woman who approached her at the grocery store.

“She walked over to me and told me she was in a wheelchair for four years,” Monique said.

“She broke her neck, back and legs and showed me the scars.

“I went to therapy that day and had that urge to stand up. I did it on my first time and everybody just erupted in tears.”

Monique’s next milestone is to walk unaided – and the clinical trial she’s taking part in could prove a huge help in allowing her to take her first step.

Provided she can raise the $30,000 needed to cover travel costs, Monique will undergo up to 40 hours of training before being given an exoskeleton to take home for a year.

The technology should help improve her muscle tone and Monique – who first used an exoskeleton in June – hopes it’ll aid her in her journey to walk by herself.

“I just have to stay stubborn and never give up.”