A devoted barber chose to give his one-legged client a fresh trim OUTSIDE – because his mobility scooter wouldn’t fit inside the shop. Kieran Worthington, 28, moved his clippers and scissors outside to give Billy, whose in his 70s, a short back and sides in the reflection of the shop window. The barber realised […] 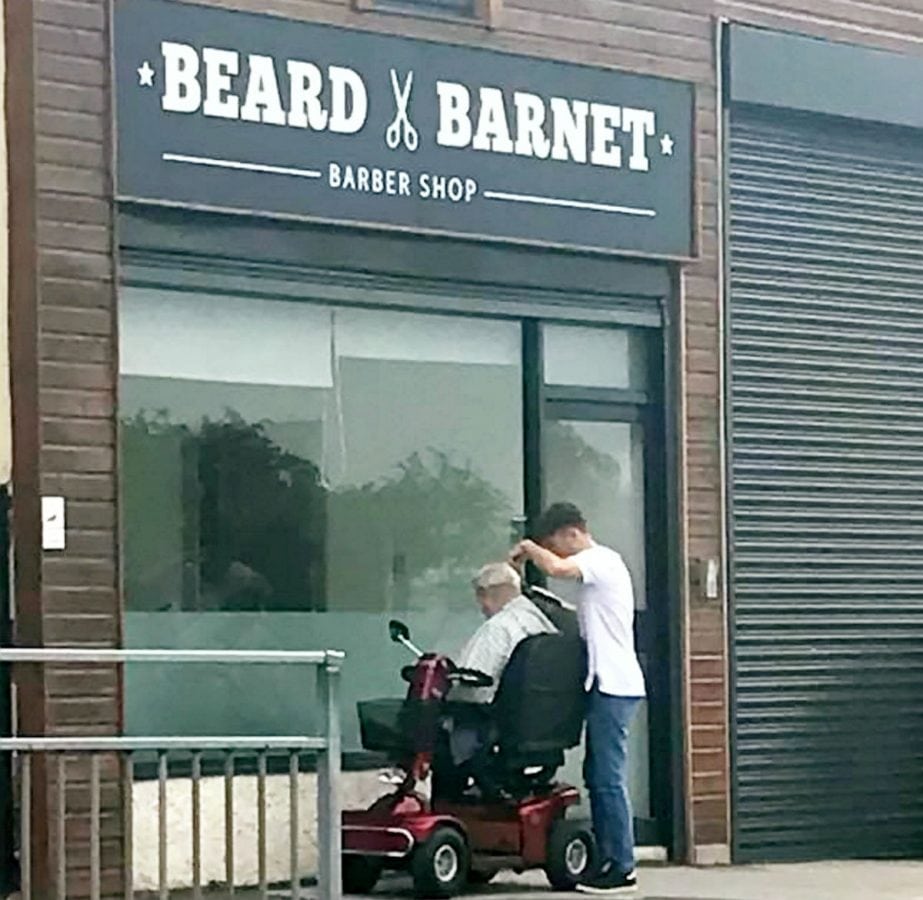 A devoted barber chose to give his one-legged client a fresh trim OUTSIDE – because his mobility scooter wouldn’t fit inside the shop.

Kieran Worthington, 28, moved his clippers and scissors outside to give Billy, whose in his 70s, a short back and sides in the reflection of the shop window.

The barber realised that poor Billy didn’t have crutches and his mobility scooter only had ‘one speed’ fast setting.

It meant that the scooter couldn’t be navigated inside the shop without crashing into the window or fittings.

Crafty Kieran then decided to sculpt the pensioner’s new hair doo outside Beard and Barnet barbers in Leeds, West Yorks., which was admired by members of the public.

Kieran said: “Being on a mobility scooter speed, Billy would have driven into the wall because it only had one setting – and that was too fast.

“I didn’t mind cutting his hair outside because it’s just what we do really – we’d do it for everyone and anyone.

“It’s not even a big deal, or knew anyone had taken a photo, as tomorrow we’d have forgotten about.

“He said he was struggling to get inside other shops in town and we told him we’d help him out.”

Beard and Barnet, who charge £13 for a gents haircut, said it was the first time they had ever cut somewhere out the store front.

Kieran had used the reflection of the store front to help cut Billy’s hair and even brought out a mirror to show Billy the back of his doo.

The barber shop owner Graeme Harding, 34, of Brighouse, West Yorks., added: “Billy had asked a friend of mine, it was my landlord actually, if there was anyway we could cut his hair and he came back yesterday (Thurs) and Kieran did it outside.

“The thing is, we’ve cut each other’s hair outside all the time so it’s no big deal to us, but we really wanted to help billy out.

“If I’m honest, we have old blokes come in on mobility scooters quite often and the guys park them up, get off and come inside.

“But unfortunately Billy couldn’t do that because he didn’t have any crutches.”

Helen King, 27, was the one who spotted the commendable deed and she said it had “restored her faith in humanity”.

Speaking about the picture, she added: “I absolutely loved seeing the guys helping out that old man.

“I was driving in my car and of course I just had to pull over and take a picture of it.”