A gay man who is being wrongly branded a paedophile by vile thugs in a sustained hate campaign says he will not be run out of his home. Charlie Joyce, 30, has been subjected to vile verbal abuse, graffiti and smashed windows since moving into his flat nine months ago. All the windows to his […] 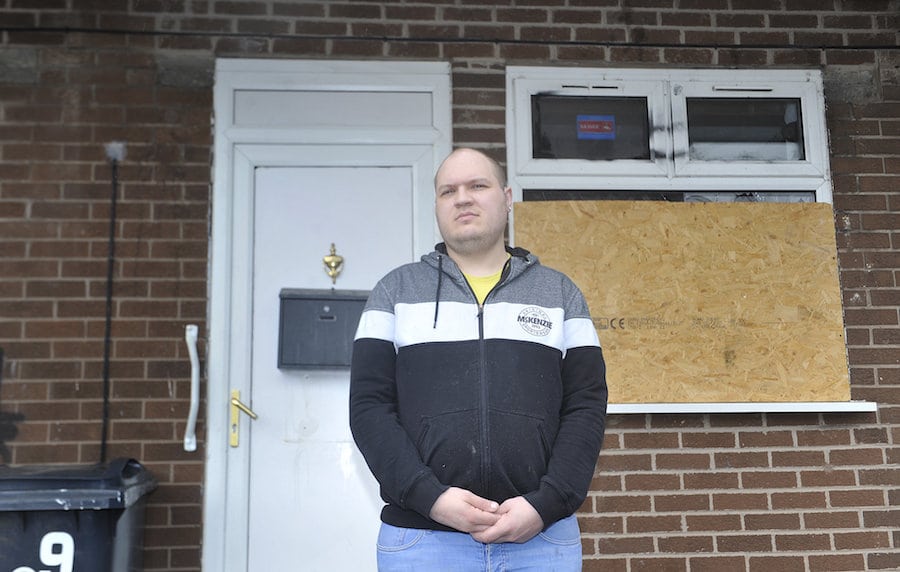 A gay man who is being wrongly branded a paedophile by vile thugs in a sustained hate campaign says he will not be run out of his home.

Charlie Joyce, 30, has been subjected to vile verbal abuse, graffiti and smashed windows since moving into his flat nine months ago.

All the windows to his flat have been smashed with hurled bricks and he has even had “paedophile” and “grass” daubed on his outside walls after reporting the abuse to police.

Charlie, of Oldham, Greater Manchester, who has been openly gay since the age of 11, believes somebody in the community has identified him through a gay internet chatroom.

He said: “The majority of gay people are bi-curious and are often in the chat rooms but they are still in the closet.

“And of course around here people think if you are gay you are a paedophile.

“Since word seems to have got around I can’t leave the house without being accused of being intimidating.

“I can’t even go outside for some air without being accused of staring at kids.

“I go to the shops and get vile abuse shouted at me by kids and their parents.

“I just don’t what the world is coming to when being gay and being a paedophile have become the same thing.”

Charlie has lived with having bricks thrown through the windows of his flat for so long now he no longer bothers having them replaced and leaves them boarded-up.

But, Charlie, who was homeless before he secured the rented accommodation, now fears for his safety.

He is diagnosed with complex epilepsy and is prone to fits brought on by stressful situations.

He said: “The bricks coming through my windows are massive.

“If one of those hits me on the head it’s going to be life-changing and I won’t come back from it.

“I’ve been hit on the head before and that brought on a fit that put me in hospital.

“Police say they cannot do anything due to a lack of evidence but I’m just wondering what it’s going to take for them to take this seriously.”

In an effort to protect himself Charlie has spent hundreds of pounds having CCTV installed only to have the camera lenses smashed.

He said: “It can be quite scary at times – the other day a group of lads at tram stop were calling me “faggot” but I don’t say anything.

“I’ve seen them pulling knives out of their pants around here before.

“I know gay and lesbian people who have been forced out but I think why would you move rather than face these people head-on?

“What bothers me is that they seem to think they can get away with it.”

A spokesman for Greater Manchester Police said: “We were called at around 11.30pm on July 18 to reports that a brick was thrown at a window, causing it to smash two panes of glass on St Stephens Street, Oldham.

“Officers are treating this as a criminal damage incident and are encouraging anyone who has information about the incident or any crime in their area to get in contact.

“The local Neighbourhood Policing Team led by Sergeant Atherton are working closely with partners which include Mr Joyce’s housing provider and other agencies.

“Patrolling within the area has been increased.

“Sgt Atherton stated that anyone found committing crime within the Higginshaw area will be held to account by police and partners.

“Antisocial behaviour and criminality can result in breaches of tenancy which can have implication for others within the household.

“Anyone doing such acts needs to consider their actions have consequences not only for them but also for others within their household.”