By James Mackney Move aside Minions, for ‘Captain Underpants: The First Epic Movie’ is the family film of the summer. It has everything: fart jokes, an arch villain who looks like a cross between Albert Einstein and Professor Weetos, sly and silly cultural references and a caped-crusader – in just his underpants! It is a […] 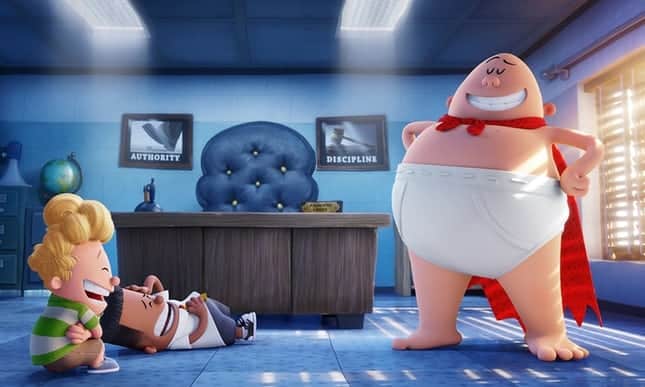 Move aside Minions, for ‘Captain Underpants: The First Epic Movie’ is the family film of the summer. It has everything: fart jokes, an arch villain who looks like a cross between Albert Einstein and Professor Weetos, sly and silly cultural references and a caped-crusader – in just his underpants! It is a film that unashamedly celebrates the sheer creativity of children’s imaginations.

Within the first 10 minutes there is a joke about Uranus being a gas giant. If you laugh at this then the film is playing squarely in to your ballpark, or perhaps you’re six? Either way the film is both silly and playfully crude. Yes, it is full of toilet humour but it is not an arduous slog that scrapes the bottom of the bowl, as it were. The film zips along at such a pace it is almost as if you’re watching a group of young children playing an imaginary game with their friends. The film heads off on tangents in all different directions, but still makes sense. There is heart to what is happening throughout; with a clear focus on friendship.

A key plotline of the film is that the two central characters may be split up from each other and put into separate classes. Friendship and the idea of ‘best friends’ are crucial to students of all ages, particularly to this target audience and friendship is used to hook them into the film and fundamentally drives the narrative. The film handles the tone of this plotline with skill and balances the journey for its audience (building suspense but ultimately providing the desired conclusion) expertly.

David Soren’s animation, taking inspiration from Dav Pilkey’s source material (of which there is a lot), is a surprise. The film is not afraid to throw in not one but two short musical numbers and uses actual sock puppet animation rather than the usual CGI. Like The Lego Movie and Zooptopia before it, the film is inventive enough to maintain audience interest whilst not being schlocky or derivative.

The central premise of the film is the friendship, or bromance, of George (Kevin Hart) and Harold (Thomas Middleditch). Due to an accident with a 3D hypno-ring – a plastic toy neither of them thinks will work – the characters transform their hated principle, Professor Krupp (Ed Helms) into the foolish, hapless but well-intentioned Captain Underpants. His stupidity is so evident that this ends up being his main superhero power. Peril comes from the evil Professor Poopypants (Nick Kroll) and his Turbo Toilet 2000, a gigantic robotic lavatory that he uses to try and steal laughter form the world. But why is he doing this? Because he hates people laughing at his name. Tough luck Professor, I laughed loudly all the way through.