The vile anonymous letter read: “Get that revolting flag down. This is a Christian village (three churches) and children pass by. What kind of morons are you?” 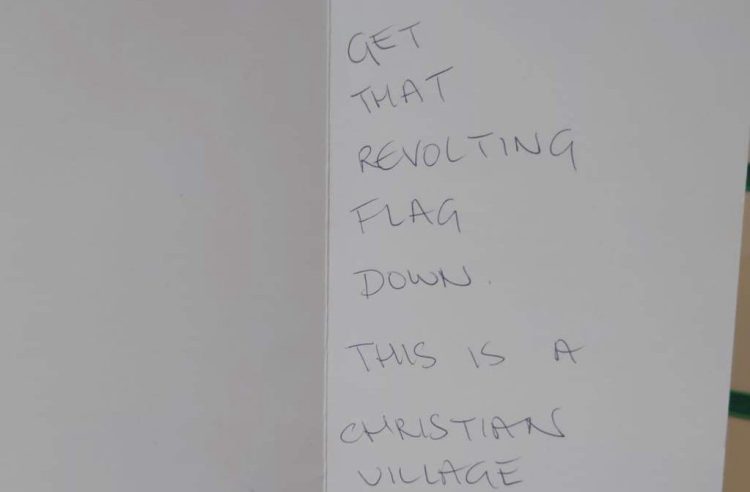 Hundreds of villagers have rallied around a gay couple who were targeted with vile homophobic abuse after erecting a pride flag outside their shop.

Around 200 residents joined a rally in which they carried rainbow flags in support of Daniel Cooper and Nathan Jones who said they were ‘overwhelmed’ by the event.

Daniel and Nathan, both 29, received four homophobic letters since taking over the village post office at New Longton, near Preston, Lancs, in February this year.

Their latest piece of homophobic hate mail targeted the ‘revolting’ Pride flag they have displayed outside New Longton Post Office and Convenience Store.

The vile anonymous letter read: “Get that revolting flag down. This is a Christian village (three churches) and children pass by. What kind of morons are you?”

Disgusted locals organised a rally where around 200 people showed their support outside the post office waving pride flags and banners.

Daniel said he was ‘shocked and mortified’ to receive the letters that target the LGBT+ community in Pride Month, which runs throughout June.

He said: “You don’t expect anything like that to come through your door, especially anonymously and through the post.”

But he added he was ‘overwhelmed’ by the level of support that was shown at the rally, which was organised by members of a local Facebook group.

Daniel said: “This whole thing is beyond crazy, it has all happened so fast as we only received the letter last week.”

“I am overwhelmed at how many people turned up.

“It just goes to show that love conquers hate and that there are so many more nice people out there than small minded ones.

“I have a thick skin and the letters haven’t deterred us from working here.

“In fact, it has pushed us to carry on and we have received so many messages of support this morning.”

He added that he ‘even had a 96-year-old man nearly cry in front of me’ as he showed his support.

Daniel said: “We are not 100% sure if the messages have come from the same person, but the letters made us feel dirty, like we are sinful, when we aren’t.

“This has now become nothing about us. It is about standing against oppression. No one should dictate your life.

“We can have the pride flag up if we want to, just because they don’t agree with it doesn’t mean we can’t have it up.”

Event organiser Sarah – who didn’t give her last name – said the villagers were ‘disgusted’ by the letters.

She said: “When the boys told me about the homophobic letters the villagers were disgusted by it.

“As the letters were anonymous, we wanted to try and send a message back and to show Nathan and Daniel these aren’t the views of the majority of our loving community.

“The rally was brilliant.

“I think the boys were really made up and overwhelmed at the support.

“Everyone was really happy and I could hear friendships being made and people arranging to meet up.

“It was just a really nice and positive event which I hope sent a clear message that outdated views and hate won’t be tolerated.”

Several villages have shown their support for the men on social media, and have also expressed their opinions on the people who have sent the anonymous messages.

Russell Hesketh said: “A wonderful show of solidarity and support for the guys at the New Longton Post Office.

“It was such a great positive, happy atmosphere. The perfect antidote to homophobic hate crime. Love wins over hate.”

Vic Cairns said the event was ‘incredible’ and had ‘a great turn out’.

She said: “It was wonderful to show support.

“Hopefully the sadness and hatred in that one person who sent the card and letter may begin to change.”

Related: Homophobic thugs kicked woman’s teeth through cheek after she defended man being ‘attacked for being gay’