Residents in Birmingham, which has been the centre of a vicious row between Muslim anti-LGBT groups and inner city schools, were shocked to get the leaflets through their letterboxes 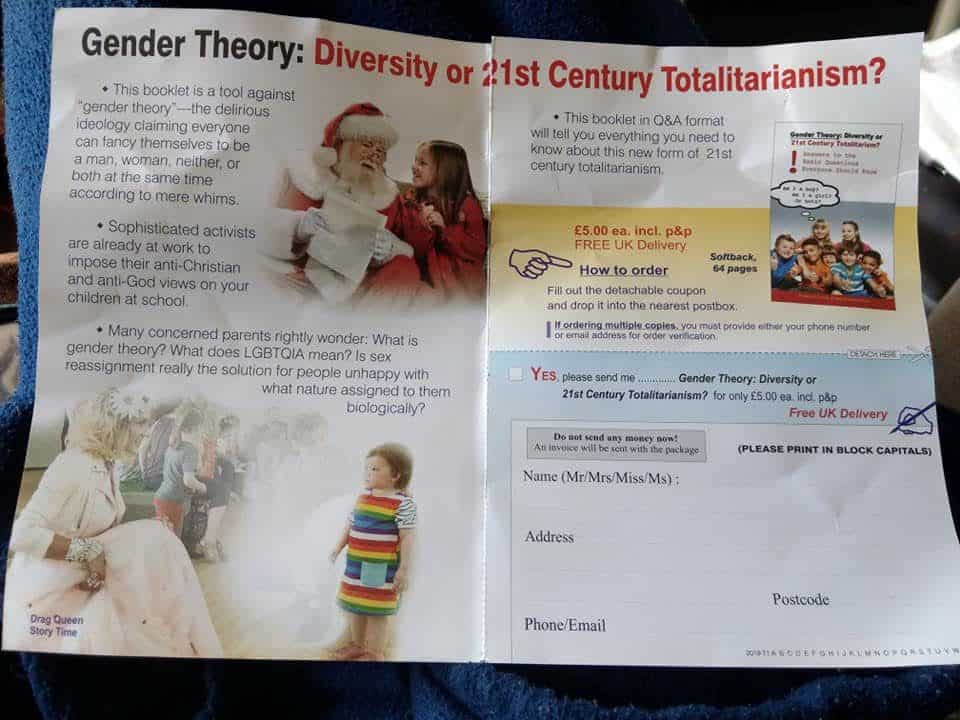 The leaflets railed against “gender theory – the delirious ideology claiming everyone can fancy themselves as man, woman, neither or both at the same.”

It also claims: “Sophisticated activists are already at work to impose their anti-Christian and anti-God views on your children at school.”

Birmingham has been the centre of a vicious row between Muslim anti-LGBT groups and inner city schools with parents picketing school gates and removing pupils from lessons.

Janique James, 23, a singer from Yardley, Birmingham, was disturbed to get the leaflet through her door on Tuesday (20/8).

She said: “This leaflet is disgusting. It is wrong a transphobic ‘Catholic’ hate group is posting this rubbish through my letter box. Surely they have better things to do.

“God knows where it’s come from but I’m not surprised I’ve received it, people have been protesting outside schools against sex education and LGBT+ education in the local area.

“One thing is for sure, the leaflet is going straight into the cat litter. I’ve got no time for homophobia and transphobia.”

Janique shared the leaflet on social media, which have also reportedly been given away in the Bull Ring Shopping Centre and bizarrely include images of Santa Claus.

Jane’s friend Rebecca Dawes Lea said on Facebook: “This is from Tradition, family and property they are prolific in America protesting against abortion rights and gay marriage.

“They are often called a cult. It’s the first I’ve heard of them on British turf.”

Lens E Pitt added: “Disgusting as it is but why bring Father Christmas into this??! “He has a tough job as it it.”

The leaflets call for readers to pay £5 for a 64 page booklet which will answer questions including What is Gender Theory? What is Queer Theory, What is anti-Science Theory and is Gender Theory the result of the eruption of the sexual revolution in 1968.