The family of an elderly dementia sufferer who died covered in twenty cuts and bruises today called for an inquiry – claiming carers failed to record the injuries. Blind Pamela Matthews, 85, was left with deep gashes, carpet burns and extensive bruising after a month-long stay at £825-a-week Woodbine Manor. Her family began noticing small […] 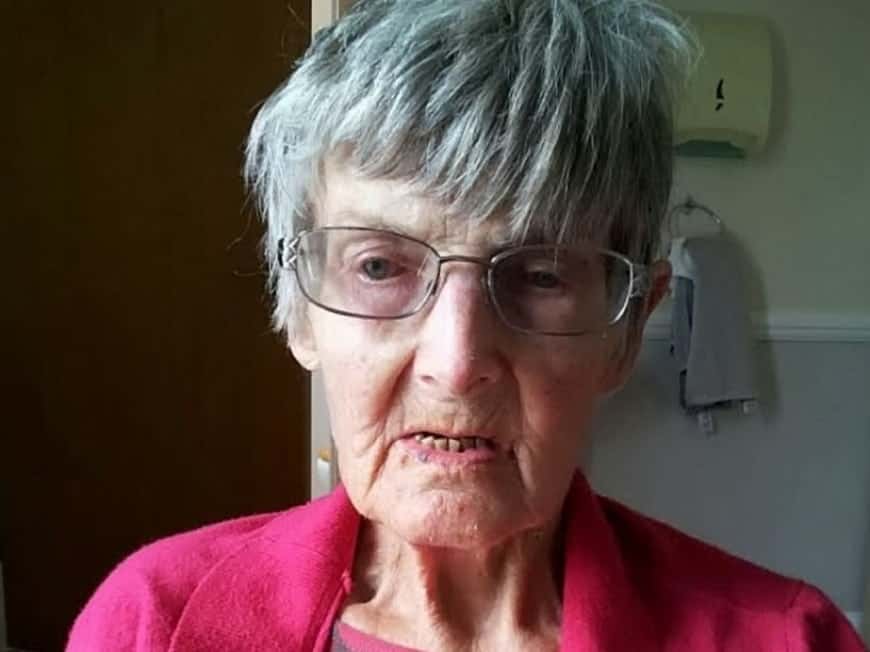 The family of an elderly dementia sufferer who died covered in twenty cuts and bruises today called for an inquiry – claiming carers failed to record the injuries.

Her family began noticing small marks on her arms and buttocks a week after she moved there and say staff started dressing her in long-sleeved clothes. Daughter Celia Matthews, 63, and other relatives later discovered sore carpet burns on her legs and were told by carers that the great-grandmother had suffered a fall.

But they were left fearing for her safety after she allegedly asked them why the “horrible” night staff had made her crawl on the floor.

Desperate to discover the truth, they bought a hidden camera to install in Pamela’s room but an ambulance was called to the home last July before they could set it up. When paramedics arrived, they peeled back her clothes and discovered the sickening extent of her injuries. Her family claim carers didn’t record a single one.

Former civil servant Pamela of Fulham, London, was rushed to hospital where her battered body reduced one doctor to tears, her family said.

The Care Quality Commission says it is “inspecting” the cqre home and a report will be published later.

It comes as figures emerged which show that 23,000 allegations of abuse were made against home carers in the UK from 2013-16, but only 15 resulted in prosecution. Christina, of Arundel, West Sussex, said: “Before nan went to Woodbine she was happy and in good spirits but the home finished her. It totally destroyed her.

“The worst part is that we don’t know how she got any of the injuries. We don’t know what she went through because nothing was recorded and no pictures were taken.

“I don’t know if they were moving her around incorrectly or she was hurt intentionally, but I know she was treated with no dignity at all.

“They took away the end of her life but absolutely nothing has been done since we reported our concerns, and other residents are still living there.

“There was no reason for her to die when she did. Her condition hadn’t worsened at all and there were no signs of infection.

“We just feel so guilty that we didn’t get her out of there. Whatever she went through killed her but absolutely nothing has been done.

Pamela lived with her husband of 54 years, Leonard, a quartermaster, in Fulham before moving to Arundel to be near her family after he died of cancer 14 years ago.

She was registered blind in June 2015 as she had glaucoma with tunnel vision and arrived at Woodbine the following July after being diagnosed with Alzheimer’s. Hauntingly, the disorientated pensioner thought she was on holiday when she arrived there and told her daughter: “I’m so lucky to be here.”

But within weeks, Pamela – who could previously walk unaided – was wearing adult nappies, relied on a wheelchair and had marks on her body, her family say.

As well as sustaining more than 20 mystery injuries, Pamela was left in soiled pads, her hair was matted and she had high levels of blood thinner Warfarin in her system.

Her personal possessions went missing, the home was dirty and cold, staff were rude and residents were “zombies” stuck in front of the TV all day, her family claim.

A previous CQC inspection found that residents were not protected from abuse and neglect and that staff and managers did not report concerns.

Even so, her family claim the home was recommended by medics who put a star next to it on a list of options, and that the website looked “amazing”.

Christina said: “She was really happy at first, she loved it. She was overwhelmed. She didn’t realise where she was and she said, ‘I’m so lucky to be here.’

“But she was only there for four weeks and it all went wrong.

“Nothing can be done for my nan now, but there are other residents still living at the home. People just don’t want to know.”

Woodbine Manor said: “The case went to safeguarding and it is private and confidential.

“We have followed all the recommendations and it was all dealt with. We are not prepared to comment on it as it is private and confidential.”

Amanda Stride, Head of inspection for Adult Social Care at the Care Quality Commission said: “CQC can confirm inspectors are currently inspecting Woodbine Manor Care Home in Bognor Regis, West Sussex, as a result of information of concern raised to us.

”A report detailing the findings of our most recent inspection will be published in due course.

“Our first concern is the welfare of the people who have been living at Woodbine Manor Care Home.

“We are satisfied that the local authority and safeguarding teams have acted in conjunction with the provider to ensure the safety of people living there.”