Ex-soldier Perry Tatler, 29, had been suffering from PTSD after being shot twice while serving in Afghanistan 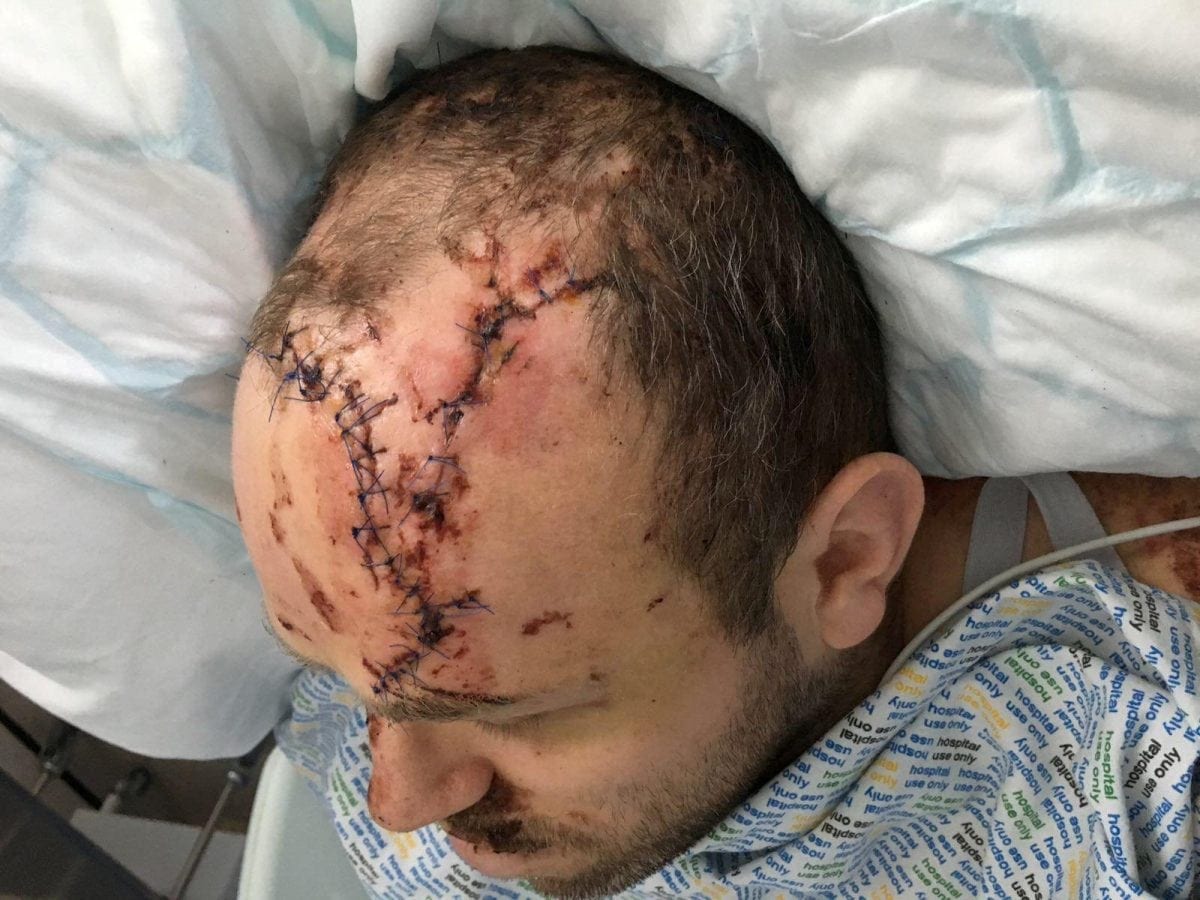 An ex-soldier who survived jumping in front of a train has apologised to those who witnessed his attempted suicide and thanked those who helped him.

Perry Tatler, 29, kissed his two young children goodbye for what he believed was for the last time before heading to the train station.

Despite throwing himself in front of a train, he lived to tell the tale and is encouraging others to seek help if they feel suicidal. 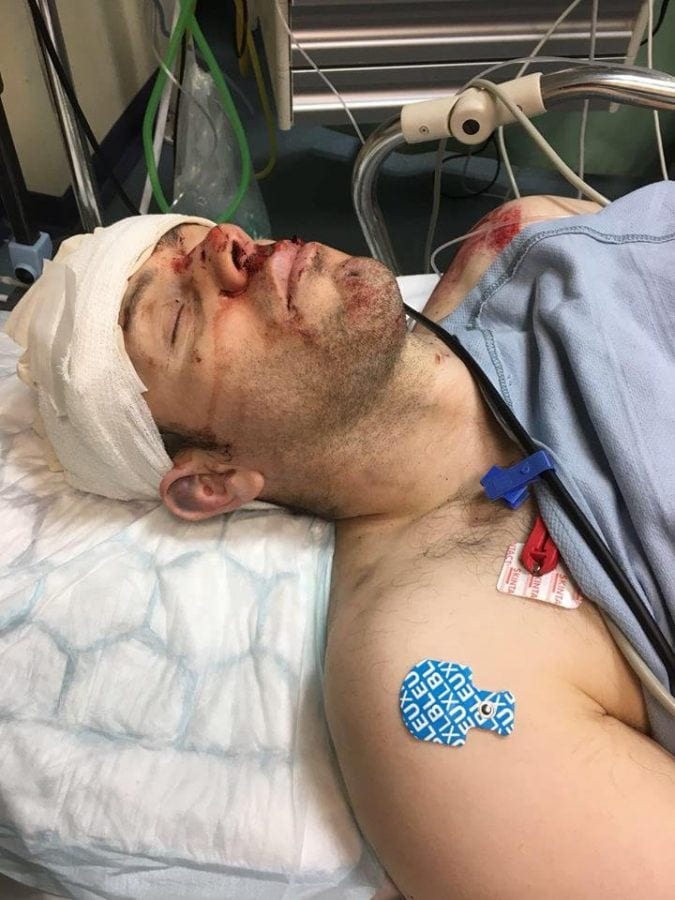 The dad-of-two remains in hospital five months on, having sustained a broken back, shoulder and ribs, and a bleed on the brain.

But he is walking again with the aid of crutches and a back brace, and now feels ready to thank those who helped him.

Perry said: “When you get that low you feel like you’ve got no other choice. That’s how the demons make you feel.

“It sounds really bad but I don’t regret doing it as it’s made me appreciate life more.

“But I do want to say sorry to the people who were there on the platform at the time, and the train driver. I didn’t want to put any harm onto anyone else mentally.

“I also want to say thank you to the emergency services who I have a new respect for, as I do all the nurses who have looked after me.”

Perry served in the Army for five years, and two months into a tour serving in Afghanistan in 2011 he was shot in both legs during a routine patrol.

He was medically discharged from the Army two years later and had been diagnosed with PTSD which he had been receiving support for.

However, after returning back to civilian life he believed he could deal with his issues without help.

Perry said: “The injuries I suffered in Afghanistan were more mental than physical because luckily both bullets went straight through my legs rather than hitting my main arteries or bone. 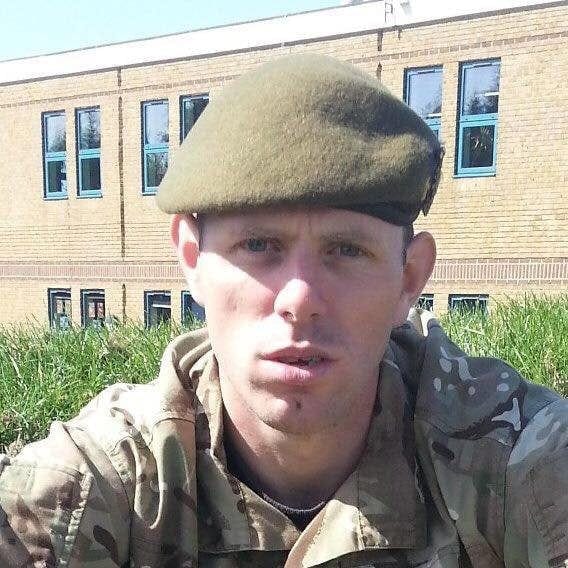 “I physically recovered from the injuries but about a year after the incident I didn’t want to go out or do anything.

“When I was discharged from the Army I thought I could deal with it myself.”

In 2017 Perry moved to Torquay, Devon with his ex-partner and held down a security job at Exeter Prison while his mental health deteriorated.

After Christmas 2017 things started getting worse.

“I put a smile on my face and all my work colleagues thought I was happy but it was all false,” he admitted.

“Being a man I just bottled it up. I felt so low and helpless to the point I didn’t think I could take it anymore.

“I kissed them goodbye which was the hardest thing knowing what I was going to do,” he said.

“I then remember everything such as walking down to the train station and walking to the end of the platform.

“I don’t remember seeing anyone but I have been told there were lots of people who saw me jump in front of the train, including children which I feel really bad about.

“I didn’t want them seeing that kind of thing but I didn’t even realise they were there. It wouldn’t have stopped me though if I did because at that low point nothing else matters.

“My dad, who has passed away, must have been looking after me that day because I’m still here and I’m not missing any limbs.”

During the incident on April 7, two air ambulances landed at nearby Torquay Rugby Club and train services through the station were suspended for more than two hours. 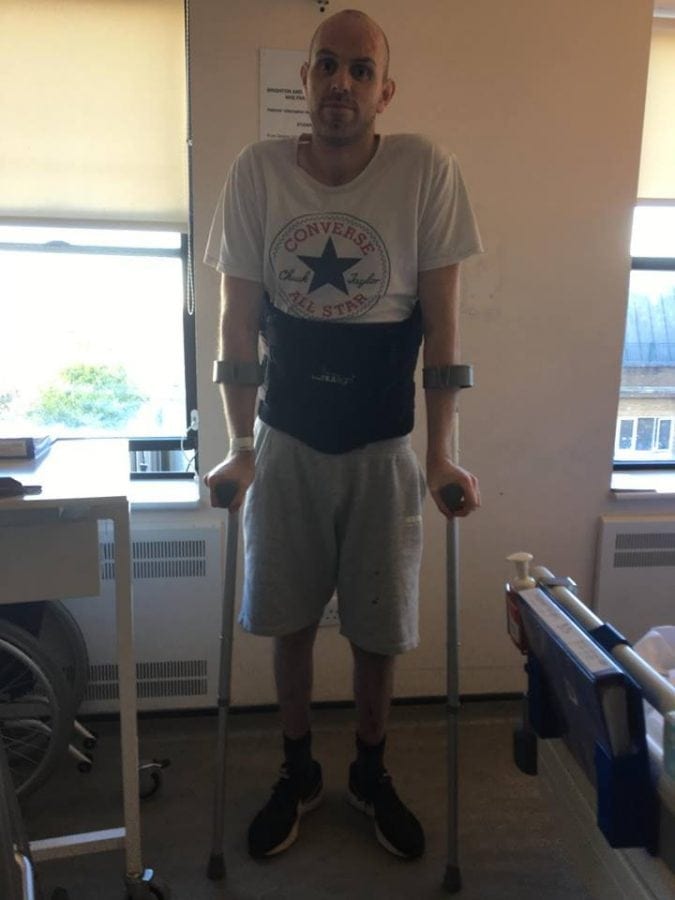 Perry was rushed to Plymouth’s Derriford Hospital where he stayed for a month until he was transferred to a hospital in Brighton to be closer to his family.

Currently he has to use crutches to walk and a brace around his body to support his back.

He doesn’t know when he will be well enough to leave hospital but plans to rebuild his life again with the continued support of ex-military services and charities.

Making a direct appeal to other young men to talk about how they are feeling and to seek help that is out there, Perry said: “There is a way through the dark patches, and there is help out there if you try to find it.

“I would also encourage people to ask people if they’re okay.

“I hope to make a full recovery and to be the best dad to my to beautiful children.”