“It has put a huge smile on his face.' 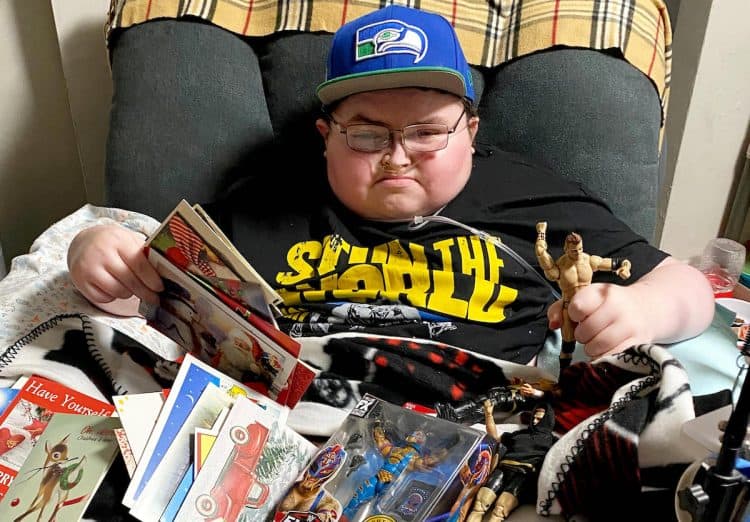 A disabled teen has been sent more than 500 Christmas cards by strangers after his mum put out a request on Facebook.

Nicholas Black, 16, has several severe medical conditions and has to live in a hospice over the festive period.

So this year mum Elizabeth, 38, wanted to do something to cheer him up, and put out a request on social media.

She asked people on some Facebook groups to send her son cards – and was shocked by the response.

Delighted Nicholas has received a staggering 500 cards in the mail from all around the world – and counting.

Elizabeth, a single stay-at-home mum, said it has been a “wonderful” surprise for her son and has “put a big smile on his face” when he needs it most.

She said: “Nicholas loves it when the postman brings him mail so I thought it would be cool to put our address out there to see what people send.

“He can get very down and it’s so difficult to watch him go through it and I hoped it would cheer him up.

“I never expected this many – I expected he’d get maybe three cards a day – but he gets more than 30 cards to open each day!

“It has put a huge smile on his face – it really brightens his day and gives him something to look forward to.

“It’s been wonderful and it has shown people are truly amazing – I’m forever grateful.”

Nicholas, from Deland, Florida, was diagnosed when he was a baby with scoliosis, hydrocephalus, syringomyelia and Chiari 1 malformation.

The conditions mean he is unable to walk and has to have a constant supply of oxygen – so he lives in a home hospice under constant care of doctors and nurses.

The teen has had 49 surgeries in his lifetime and can’t go to school so Elizabeth said he doesn’t have many friends and gets “down” at times.

She opted to share Nicholas’ address on some Facebook groups to see if anyone would send him Christmas cards, as he “loves getting mail”.

And the response blew their minds – after cards began appearing in their hundreds.

Nicholas has now received more than 500 cards as well as several wrestling figurines as he loves watching wrestling.

They have come from all around the world – including the UK, Puerto Rico, Italy, Australia and Canada.

Elizabeth said getting his mail in the morning has become “something for him to look forward to every day” and has given him the boost he needed.

She said: “It’s put a big smile on his face. It really brightens his day – he loves it when the postman comes.

“We never expected this many people to want to send one but it’s been wonderful. People really are amazing, I’m forever grateful.”

Cards can be sent to: