Kevin McCarthy got down on one knee when he learned the love of his life, Mandy Lucitt, was suffering from incurable pancreatic cancer.

by Ben Gelblum
in Family, Heart Wrenching, Must Reads 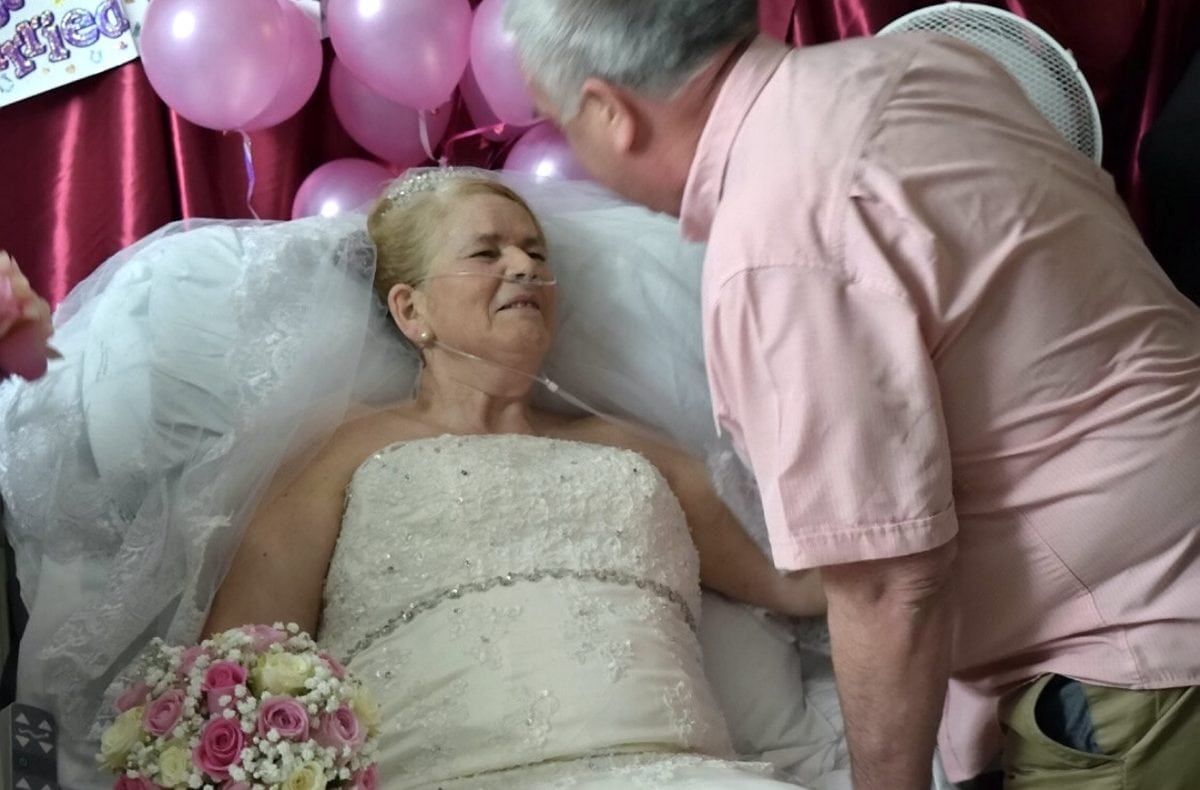 A loving father proposed immediately after his childhood sweetheart was diagnosed with terminal cancer – and they got married just 24 hours later.

Kevin McCarthy got down on one knee when he learned the love of his life, Mandy Lucitt, was suffering from incurable pancreatic cancer.

The pair, who had been together since school, got married surrounded by their children, friends and family the next day in Mandy’s hospital room.

Mandy, from West Kingsdown, Kent, said: “I had my wishes come true at the wedding, I could see all of my family and people I care for.” After previously beating breast cancer, the mother-of-three said that her message is not about her suffering, but helping others going through dark times with their health.

For the big day, friends and family rushed to find a ring that fitted and arranged a cake, flowers, a wedding dress, hairdresser and makeup in less than 24 hours.

Each of the family members darted about London and Kent to secure everything from bouquets of flowers to a wedding cake.

Relatives even flew in from Ireland to help with the preparations for the wedding which was originally set for the end of the month. Daughter Jessica McCarthy, 31, said: “My mum’s wish was to have the wedding look nothing like a hospital room, we got to work covering medical equipment with banners balloons and making it colourful.

“The love in the room was just unbelievable, it was so great to see all those people there for her.

“We ran out to get a wedding ring, there was so much to do we managed to get the jewellers to stay open until 10 pm.”

The married couple has remained together throughout some testing times, which have driven Mandy’s passion for fundraising.

Their son, Ryan, passed away from cot death in 1984, and in 2014 their four-year-old granddaughter Layla died after losing her battle with leukaemia.

Mandy’s wedding ceremony was conducted through an ‘incredible atmosphere’ by Janet Potter and Peter Tongue from Dartford Register Office in Kent. Janet said: “Ceremonies such as these are always a priority for us, we always go above and beyond to ensure a wedding can be done straight away for such occasions.”

Now, Mandy hopes to raise as much money as possible for Great Ormond Street Hospital and has set up a Just Giving Page, which has so far raised nearly £1,000.

She said: “I have always enjoyed raising as much money as I can, fundraising is so important, especially for the children.

“My life is about helping young children, it’s bad enough that adults have to go through this – it’s not fair on children.

“I don’t see this as the end, I’m just going back to be with my babies.”

Mandy has previously collected £12,000 for charities, through raffles, walks and fun days in a bid to save the lives of others.

Daughter Jessica added: “The wedding was amazing, it has given mum something wonderful to talk about and take her mind off of things.

“It was a happy atmosphere, we were all in good spirits and mum got her wish – the money raised will be her legacy.

“The diagnosis is a terrible thing but there is a silver lining in all of this, my mother wants to devote her life to helping others.”