A shocking video shows a group of 30 youths launch a vicious attack on a special needs victim that witnesses feared could have killed him. The disturbing footage, which was widely shared on social media, appears to show a teenager initially shoving the defenceless man to the floor. Several members of the yobbish teen group […] 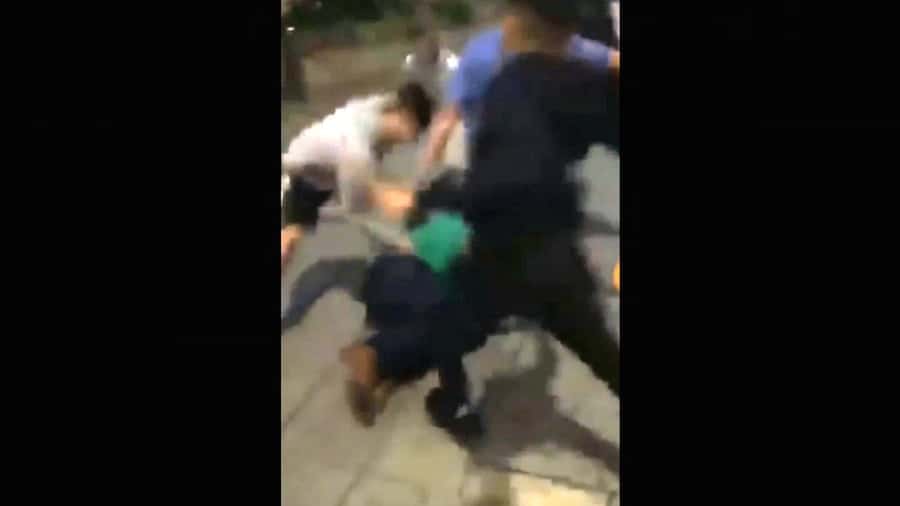 A shocking video shows a group of 30 youths launch a vicious attack on a special needs victim that witnesses feared could have killed him.

The disturbing footage, which was widely shared on social media, appears to show a teenager initially shoving the defenceless man to the floor.

Several members of the yobbish teen group then proceed to kick, punch and stamp on his head and body while he lies helplessly on the ground.

Police are now investigating the incident that happened in Plymouth, Devon, and urged anyone with information to come forward.

One off-duty officer, who did not want to be named, was so shocked by what he saw he says it could have been fatal.

He said the victim. a man in his 30s, was knocked unconscious after being set upon by a group of between 25-30 youths.

The officer and his colleague, who were both off duty at the time, stepped in to stop the teenagers, who fled the scene.

He said: “I was with a colleague and we were walking through town.

“We saw the man sat in a doorway talking to one of the homeless guys. They weren’t doing any harm. They were just chatting.”

He said a group of between 25 and 30 teenagers, aged between about 13 and 17, approached the victim and began shouting.

He added: “They started heading towards him.

“We could hear lots of shouting.

“The man has special needs and I could hear him saying ‘leave me alone. I just want to go home’.

“In the video it looks like he was starting on the group, but that’s not how it was at all.

“He just wanted to go home.”

The police officer and his colleague ran in to stop the youths.

He added: “They were stamping on his head.

“They broke his nose.

“We ran into it to break them up. I managed to grab one of them but four of them starting assaulting me so I had to let him go.

“In my mind I was thinking that he could have been killed if we didn’t stop them when we did. It only takes one punch.

The victim was treated by paramedics following the horrifying ordeal.

The officer added: “He was a lovely guy.

“He is a working gentleman and a vulnerable man with special needs. When he came around he was really panicked.

“It’s just really sad that anyone would do this.”

Police are urging anyone who witnessed the assault, which happened at about 8.30pm on Wednesday evening on Armada Way, to come forward.

Anyone who can help identify those responsible is asked to email 101@dc.police.uk quoting crime reference CR/074203/17.3