Britain’s first real ‘heartbreak hotel‘ service vows to give couples the chance to wine and dine, relax and then after a romantic weekend get – a DIVORCE. Costing up to a staggering £10,000, the ‘quicky-divorce‘ creation allows partners to vent their arguments and views in neutral territory without hefty lawyer fees. Couples will check in, […] 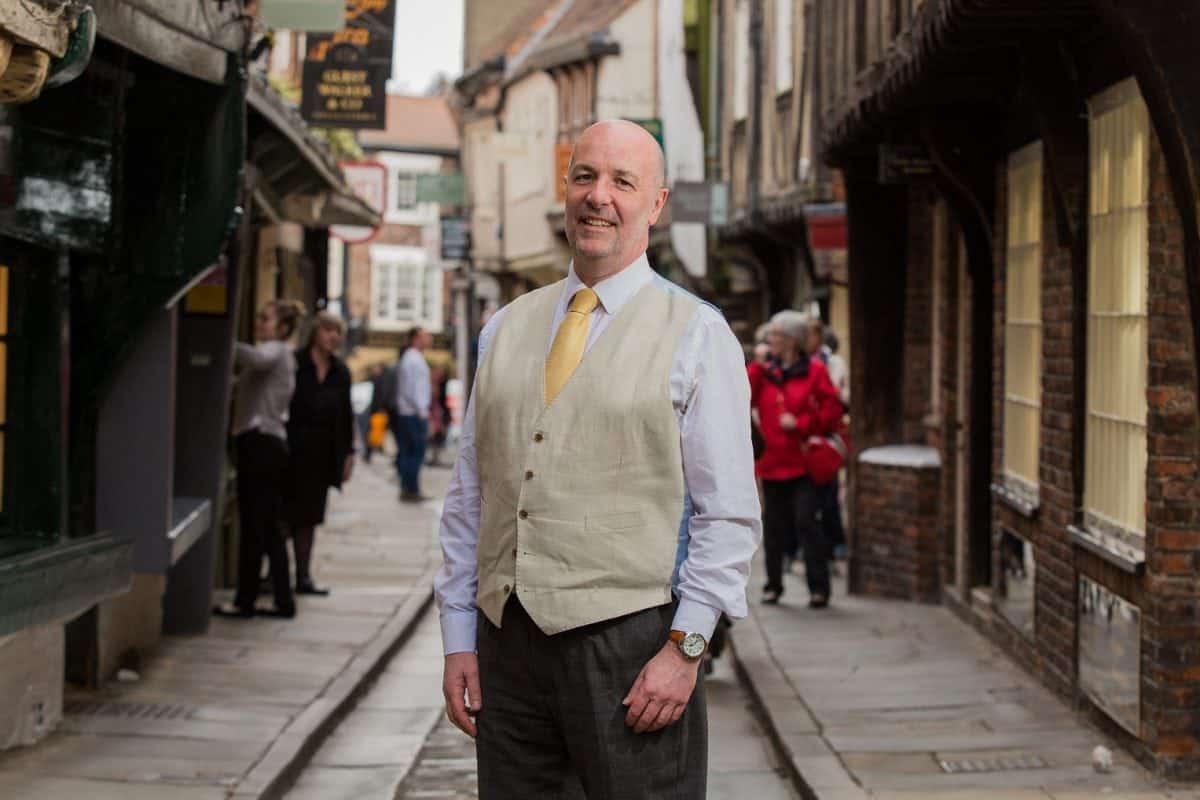 David Leckie, 58, of York, on York's iconic Shambles street. Mr. Leckie, a therapist and mediator, has launched the Divorce Hotel service, where couples can come to a harmonious settlement over the course of a weekend. April 17, 2017.

Britain’s first real ‘heartbreak hotel‘ service vows to give couples the chance to wine and dine, relax and then after a romantic weekend get – a DIVORCE.

Costing up to a staggering £10,000, the ‘quicky-divorce‘ creation allows partners to vent their arguments and views in neutral territory without hefty lawyer fees.

Couples will check in, stay in separate rooms, but promise to settle their affairs and seal their divorce within two days – and be officially split three months later.

However, the catch is that the hotel idea only works for couples who are friends or are on good terms with each other.

The Divorce Hotel‘s creator David Leckie says a couple got de-hitched at an undisclosed hotel in York last month and believes the idea will take off.

He says the anonymous pair mediated terms of their divorce while watching a rugby match together and having a ‘last supper’ before saying their final goodbyes.

It has launched in York recently. David said: “If couples want to use the Divorce Hotel they obviously can’t be wanting to throw furniture at each other.

David, a trained mediator and counsellor, brought the concept to Britain in March following its success across the pond in the US.

He believes there is a demand for “divorcing in a positive manner” – but admits English law does not make it easy and tends to encourage “the blame game”.

At Divorce Hotel, which uses a host of undisclosed venues, couples will already arrive with their affairs in order and willing to get down to the legal separating straight away.

David, who has worked in the field for 25 years, says the idea of the couple being in the hotel helps them mediate terms without distractions of other family members.

He said: “This is really good for people who want to divorce efficiently, effectively and non-acrimoniously.”

Adding: “Divorce can turn the most loving relationship into the most hurtful.” Over the weekend couples will work with a mediator and lawyer to an agreed budget – coasting between £6,000 and £10,000 depending on the complexities.

The paperwork is usually finalised over the weekend and be sent to the courts, with the divorce coming through three months later.

The couple who attended the Britain’s first ever Divorce Hotel and wished to remain anonymous said they came away happy from the experience.

They had been happily married for 24 years and had adult children, but had grown apart and wished to separate – but remain friends.

The couple’s experience at Divorce Hotel was a highly positive one as they spent one afternoon watching the rugby together and a final meal as husband and wife.

David says 15 couples have since asked to seek his refuge at the hotel and is looking to roll out the divorce carpet across the UK.

With almost half of British marriages ending in divorce, David believes many couples wish to separate in a civil, non-judgemental way – sharing the spirit of Hollywood actress Gwyneth Paltrow and Coldplay’s Chris Martin who described their separation as ‘conscious uncoupling’.