Voyslav Dimitrov, 29, risked the lives of the police crew as they hunted for a gang carrying knives 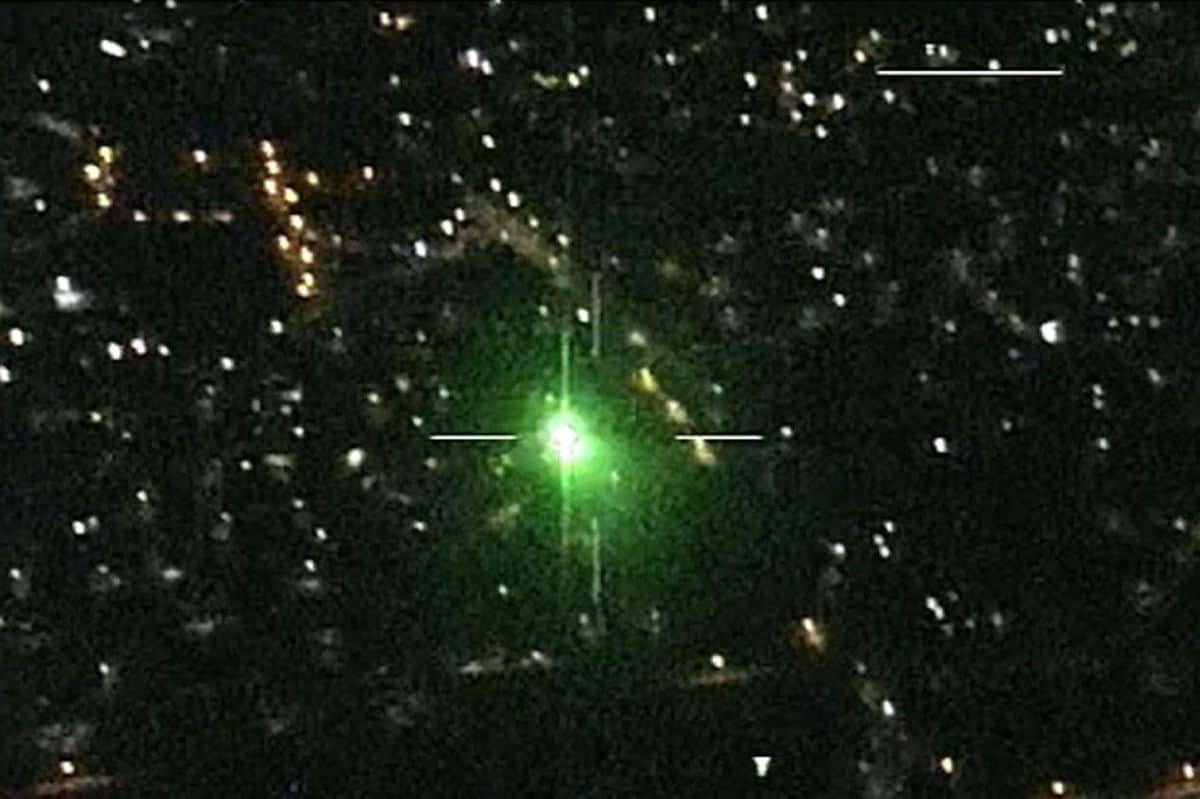 A brainless yob who repeatedly shone a laser pen at a police helicopter as it searched for a gang carrying knives has been jailed for six months.

Voyslav Dimitrov, 29, was caught on camera dazzling the pilot and crew three times as the chopper scoured the streets at night.

Footage of the attack shows the cockpit of the helicopter illuminated by the green laser and the pilot being temporarily blinded each time.

As a result of the laser attack the crew were forced to abandon their search for the thugs at 1am on September 15 last year.

Instead, the helicopter pilot bravely followed the source of the laser and the pilot led police on the ground to arrest Dimitrov.

He was arrested following the attack on the National Police Air Service (NPAS) helicopter in Wellingborough, Northants.

Dimitroz admitted endangering the aircraft and was jailed for six months at Northampton Crown Court.

Judge Marcus Tregilgas-Davey said Dimitrov risked a “fatal and catastrophic” outcome by targeting the helicopter with the laser.

PC Dom Preece, of Northamptonshire Police, said: “This incident could have been so much worse and it is thanks to the pilot, a man with over 20 years’ experience, that this did not end in a disaster.

“As you can see in the video, the laser Dimitrov used a number of times on the aircraft was very powerful and the consequences had the pilot become disorientated are horrifying.

“Dimitrov’s actions that night were completely reckless and dangerous and I am glad that he has been rewarded with a prison sentence.

“He endangered the lives of those inside the helicopter as well as the people on the ground and I hope his six months’ imprisonment will serve as a warning to others who may think it’s acceptable to shine a laser at any aircraft.”

Ollie Dismore, Temporary Accountable Manager of NPAS, said: “Shining a laser pen at an aircraft can have catastrophic consequences so we welcome the court’s decision to impose a six-month prison term on this individual.

“For NPAS, while laser strikes are decreasing on our crews, we cannot stress enough how dangerous they are.

“Crews have protective eyewear to help reduce the effects of a laser strike but it’s still a dangerous distraction, and that creates safety concerns.

“We believe this sentence sends a firm message to anyone thinking of doing the same.”

Under the Laser Misuse (Vehicles) Act, people caught targeting pilots with laser pens can be jailed for up to five years and slapped with unlimited fines.